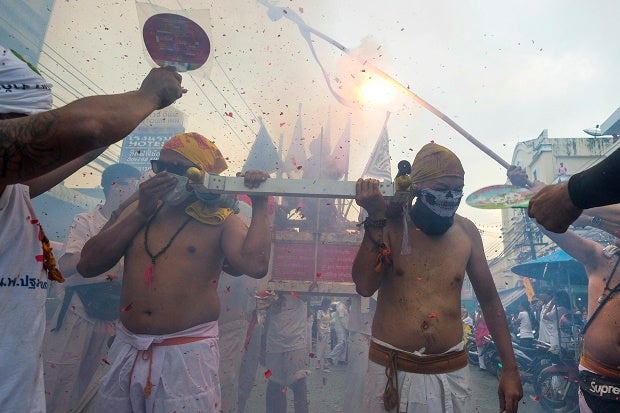 In this Sunday, Oct. 18, 2015, photo, devotees to the Chinese shrine of Bang Liao have fireworks exploded over them as they carry a portable shrine during a street procession in Phuket, Thailand. The annual Vegetarian Festival and its accompanying sacred rituals are believed to bestow good fortune on those who practice the religious rites. During the nine day festival in Phuket Town and surrounding communities which are made up mainly of Chinese descendants, residents observe a strict vegetarian or vegan diet that is believed to cleanse the body and grant merit. Sacred rituals where men and women devotees known as "Mah Song" or "Spirit Horses", work themselves into trances to have all manner of knives, daggers, swords or other items pierced through their cheeks. It is believed that they experience no pain while in the trance. AP

At Thailand veggie festival, only flesh of the devout harmed

PHUKET, Thailand— Thailand’s Vegetarian Festival is more than sprouts and tofu — it’s an assault on the senses, and for the most devout, on the body itself.

The most striking element of the nine-day Taoist celebration has little to do with food. In sacred rituals, devotees known as “Mah Song” or “Spirit Horses” work themselves into trances to have all manner of items pierced through their cheeks, from daggers and swords to a bicycle. Then they dance as massive strings of fireworks explode all around them.

The annual festival in Phuket has become a tourist attraction, with several large, noisy processions complete with fireworks, gongs and drums passing through the streets. Many Phuket residents have Chinese ancestors, and devotees to the many Chinese temples on the island parade their shrines’ emperor gods on hand-carried carriages.

The Vegetarian Festival begins on the eve of the ninth lunar month of the Chinese calendar and is observed primarily in Southeast Asian countries, including Thailand, Malaysia, Singapore and Myanmar. It traces its origins to the early 1800s, when a troupe of Chinese actors on tour in Phuket fell ill. It was decided that they should abstain from eating meat and soon all were well again.

The festival and its sacred rituals are believed to bestow good fortune. Devotees observe a strict vegetarian or vegan diet that is believed to cleanse the body and grant merit. It is believed that those who endure piercings experience no pain while in the trance.

Should you go vegetarian or ‘flexitarian’?