Strike: Defend against the deadly dengue

Despite continuous studies for the treatment of dengue, the mosquito-borne disease remains to be incurable.

Since the epidemic outbreak that started in the Philippines and Thailand in the 1950s, 64 years later, the best discovery to address the deadly fever is still insufficient.

While there is a vaccine that is formulated to prevent dengue, its efficacy is yet to be fully tested nor is it available to the public. We are left with no other choice but to rely on prevention.

However, just last year, a new type of dengue is discovered.

This means that the new strain is more capable of enduring the body’s mechanism, making it stronger and harder to cure.

With all these threats coming despite the progress in finally developing the treatment, still, it does not erase the people’s apprehension in having the disease.

While there is a vaccine that is formulated to prevent dengue, its efficacy is yet to be tested.

We are left with no other choice but to fully protect ourselves from having this disease.

After all, it’s a smart move and just like what they always say, prevention is always better than cure.

One way to prevent dengue and other mosquito-related disease is through Strike Multi-Insect Killer.

Strike is a fast-acting multi-insect killer that has a water-based formula which effectively kills mosquitoes and other insects.

It has lower toxicity as compared to the leading brand, thus, it is safe for people, pets and plants.

Strike is also environment-friendly unlike other oil-based insect killers and it contains no Chlorofluorocarbon (CFC).

It leaves to stain on the surfaces of your home and does not release disturbing odors.

For just an affordable price, reduce the risk of having dengue and other mosquito-related diseases with the help of Strike.

Strike Multi-Insect Killer Spray is available at SRP P130.00 for 300ml can and SRP P246.00 for 600ml can. Strike is available at Mercury Drug and other leading drugstores nationwide. 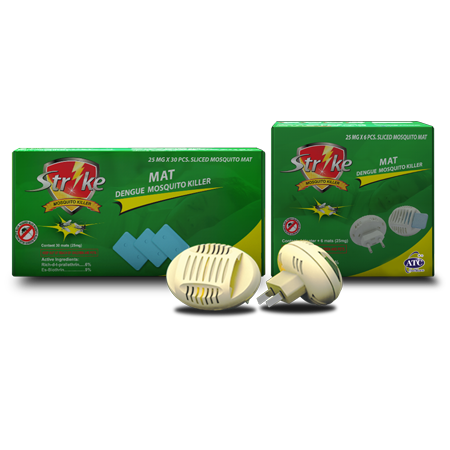