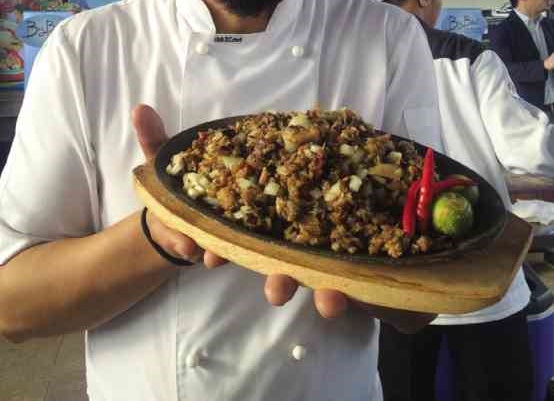 ‘Sisig’ done 3 ways–‘wet,’ tossed in pig’s brain or made of cubed ‘bangus’

Sisig has been so well-loved that it has been transformed into sandwiches, tacos and burritos. But nothing beats good ol’ Pampanga Sisig served hot on a sizzling plate.

MarQuee Mall in Angeles City, Pampanga, recently featured this classic dish in Big Bite! The Northern Food Festival, a three-day food fair that celebrates the food of the north. During the opening ceremony on Oct. 16, a cook-off was held at MarQuee Park where three homegrown chefs showed off their best sisig recipes.

Chef Sau del Rosario served Angeles Sisig Babi, the traditional Kapampangan pork sisig using chopped maskara or pig’s face that had been boiled till tender and grilled till crisp. It was flavored with soy sauce, margarine, calamansi, lots of onions and some fresh labuyo for a kick of heat.

The secret to good sisig, he said, is boiling the meat half-way and finishing it in the oven or grill. Overcooking makes the meat soggy, and the dish loses texture. Chopped chicken liver or liver spread may be added for flavor.

The sisig he served is what’s usually called the “wet” sisig, served warm and savory. Del Rosario said the original sisig used to be served cold, like kilawin, and was “never crunchy.”

“Sisig was eaten by expectant mothers, because the cartilage from the tenga was believed to help the fetus develop strong bones,” he said. “Then sisig evolved and became a lot of things—people cracked egg on it, then put chicharon to make it crunchy.”

He recalled being a student in Angeles, having beer and eating sisig at the original railroad sisig shop of Aling Lucing—the former Lucita Cunanan who came up with the sumptuous recipe that eventually earned her the title “Sisig Queen.”

Del Rosario recalled: “I know her personally; we used to dine in her shop by the railroad. She sold barbecued pig’s ears, and one day chopped them up, seasoned them with Knorr and came up with the best sisig.

“People from all over started eating by the riles; there would be Mercedez-Benz cars around. But it wasn’t sustained because, suddenly, there were 10 sisig shops serving the same thing, and the place became rowdy.”

He added that the original sisig was creamed not with mayonnaise but with mashed pig’s brain, which made it delectable but easily perishable.

Sounds icky? Not till you try chef Jackie dela Cruz’s dinakdakan, made extra special with seasoned pig’s brain. Dela Cruz is from Laoag City, Ilocos Norte, and, for Big Bite, he served the Ilocano version of the sisig.

“For dinakdakan, I also used the tongue with the pig’s face. These are boiled and flavored with ginger, red onions, chili and salt,” he explained. He added sukang Iloko for acidity and extra flavor.

After mixing everything, he tossed the sisig in coddled pig’s brain to make the flavors come together. Dela Cruz said mayonnaise can be used but “brain is still the best.”

His tip: Fry the bangus cubes first for a chunkier sisig dish. Then mix with the spices.

MarQuee Mall has been holding the Big Bite festival since 2012, said general manager Mark Sablan, and people always look forward to the food bazaar with about a hundred stalls selling homegrown products.

He works with the Department of Trade in Industry to curate the list of exhibitors, each selling delicacies from the Ilocos, Cagayan Valley, Cordillera and Central Luzon regions.

Want seafood instead? There were steamed crabs sold by the piece, halabos na hipon and crispy talangka in cups, plus rows and rows of dried fish, which is perfect with garlic-loaded sinangag.

And for daing meals, condiments such as bottled burong hipon from Navarro’s, Susie’s Cuisine Atsara and the bestseller Aslam Atbu spiced cane vinegar were available.

Desserts and snacks were aplenty, too. There were peanut brittle and chocolate crinkles from Baguio, and bags full of those tiny, white Calasiao puto from Pangasinan.

Cookies and Nancy Balls from Guagua, plus kakanin, suman, bibingka and puto bumbong.

After a day of sisig and sweets, we checked out the booths serving Benguet

Simmer pig’s head in a pot of water with onions, bay leaf, peppercorn for 1 hour or until tender.

Remove the boiled ingredients from the pot, then drain excess water.

In a wide pan, melt the butter or margarine. Add the onions and cook until soft. Add the chicken liver and crush while cooking it in the pan.

Fry boneless bangus in hot oil till brown and crisp. Cool and flake into small pieces.

Top with mayonnaise and serve immediately.