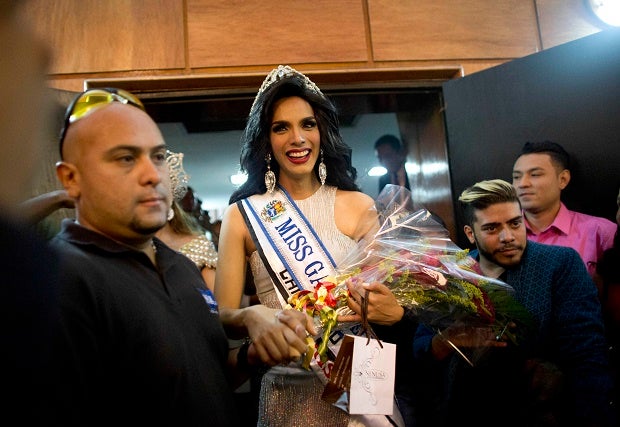 In this Oct. 18, 2015 photo, Argenis Gonzalez wears the Miss Gay Venezuela crown after winning the beauty pageant in Caracas, Venezuela. "It's a great achievement to get to be the face of what is such a large community in Latin America, and even bigger in our country," said Gonzalez, a 24-year-old social media coordinator. "And to have so many straight people cheering us on makes me feel really privileged." When not dressed as a woman, Gonzalez goes by the first name Manuel. AP

CARACAS, Venezuela — There’s a beauty contest for almost everyone in pageant-obsessed Venezuela.

In the popular Miss Gay Venezuela competition, men don elaborate wigs and layers of makeup to show off their skills in what they call “the art of transformation.”

At the ninth annual event on Sunday, the frenzy of backstage activity was intense, with young men pinning wigs into place, adjusting fake breasts and creating hourglass figures by wrapping their waists multiple times with thick tape. Some spent up to five hours getting ready.

Beauty pageants have reached the level of national sport in Venezuela, which claims to have produced more international contest winners than any other country. Young women from poor neighborhoods pay huge sums to attend beauty schools with hopes of making it to the international pageant circuit. Young men compete in events that reward handsome faces and chiseled muscles.

The Miss Gay contest is less conventional, but still cleaves to some beauty contest norms, including evening wear and swimsuit competitions. All contestants have to be younger than 37 and stand at least 1.7 meters (5’6″) tall.

The winner of Sunday’s event was 24-year-old social media coordinator Manuel Gonzalez, who competed as Argenis Gonzalez. In classic beauty queen style, he burst into tears after it was announced he had won as the representative of Carabobo state.

“It’s a great achievement to get to be the face of what is such a large community in Latin America, and even bigger in our country,” Gonzalez said after the glittery, silvery crown was placed on his head. “And to have so many straight people cheering us on makes me feel really privileged.”