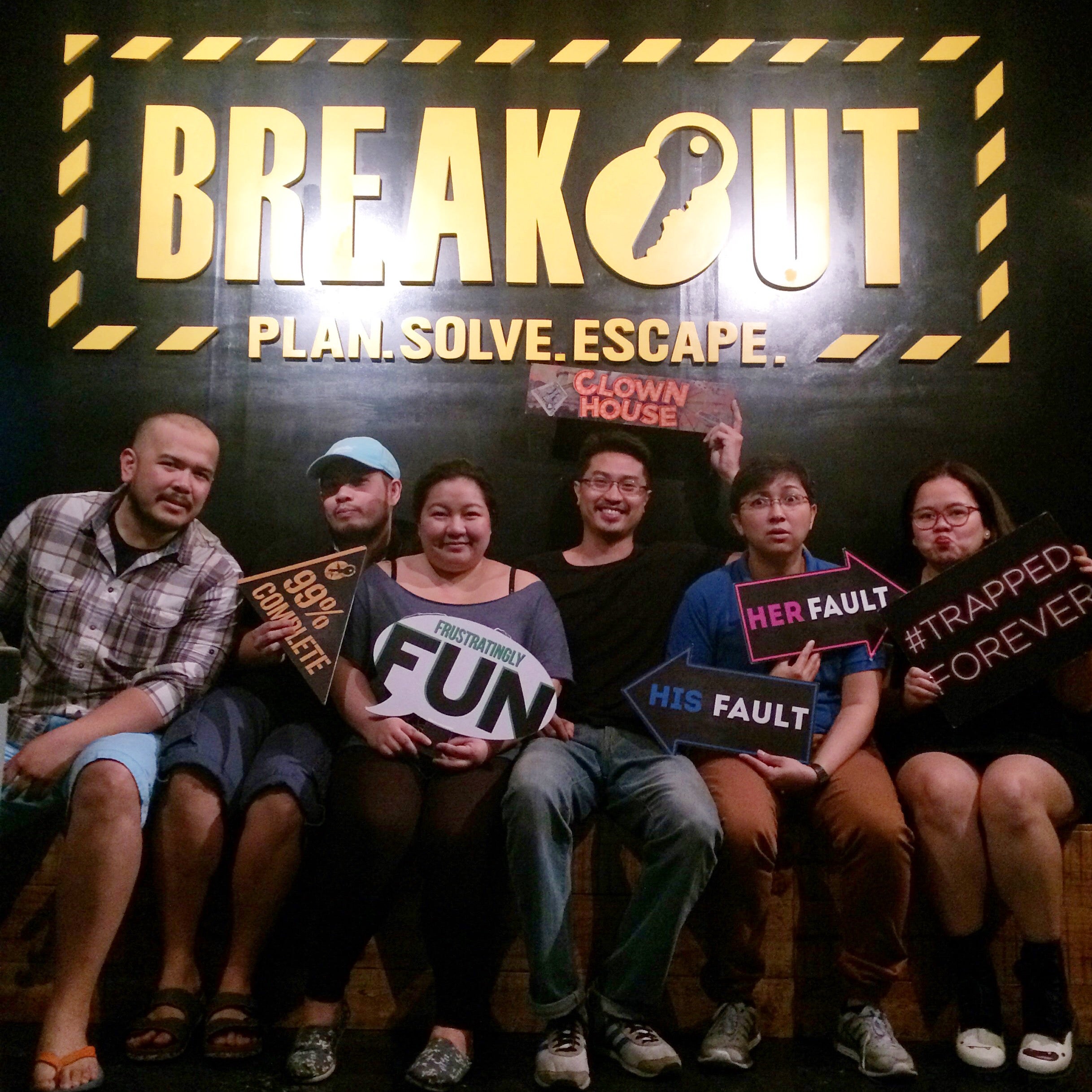 ‘Barkada’ vs Breakout : A true test of friendship 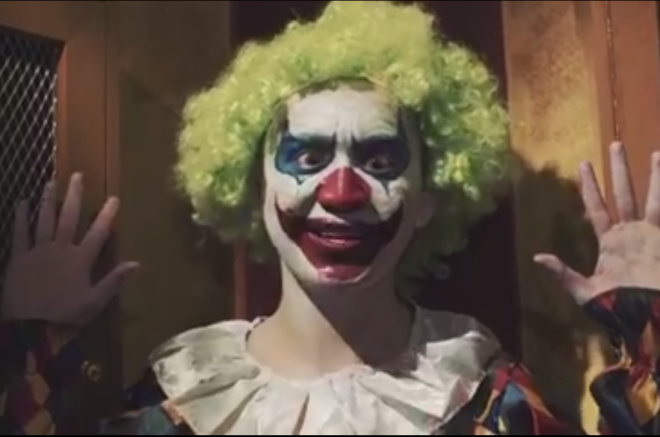 They say the true test of friendship is holding a friend’s hair back while she pukes her guts out from too much alcohol, but we say it’s trying to escape from a Breakout room.

It was our friend Marco’s idea. A radio DJ at Mellow 94.7 FM, he kept talking about how much fun he had trying to solve his way out of Breakout’s rooms. “It has a new Clown Room,” he said. “I haven’t tried it yet.”

We were eager, enthusiastic and overly confident. We had no idea what we were getting ourselves into.

We found ourselves at Breakout’s Katipunan branch on a Saturday afternoon. Marco had booked us for two rooms—the Clown Room and The Walking Dead room. We’re pretty sure The Walking Dead room (and the possibility of an encounter with a zombie) is the reason one of us suddenly couldn’t make it. Another friend backed out for a legitimate reason—he had dengue.

Such is the power of Breakout. Our day hadn’t even started and we were already dropping like flies—from eight, now down to six. But that’s okay, we thought. We’re a strong six.

The rules of Breakout are simple: You are trapped in a room (you can’t bring anything with you) and given 45 minutes to escape by finding clues and solving puzzles.

“Let’s start with a mini game,” said one of the Breakout girls. She flipped through a deck of cards and asked us to tell her when to stop.

We grabbed the card on top of the deck and showed it to everyone in our group.

“Remember your card,” we were told.

Blindfolded and, with our hands on the shoulders of the person in front of us, we were led into the Clown Room. 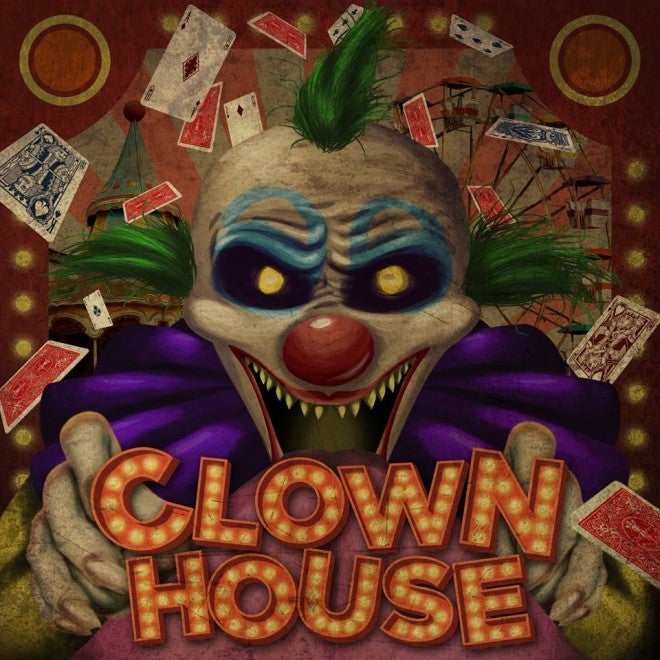 The thing about Breakout is it’s like Fight Club: you do not talk about Breakout, lest you ruin the experience for everyone else.

Here are the things we can tell you about the Clown Room:

One, it’s not as scary as it seems (unless you have coulrophobia—yes that’s a real word and a real phobia). Two, you will need two skills you learned as a toddler: counting and identifying colors. Three, you will feel like throwing a tantrum when you realize that you actually suck at the skills you learned as a toddler. Four, you will wonder how you ended up with friends who are all color-blind. (What is wrong with you, people?)

So, yes, our attempt to get out of the Clown Room was an utter failure. Still, our egos were unbruised.

“We were really close!”

“Yeah! Just one more lock and we would have been out!”

Then, seeking affirmation from the Breakout girls, we asked, “How close were we?”

“That was just 85 percent? But we had only one lock left!”

“Okay, 90 percent,” she said. We applauded her for her ability to resist the urge to roll her eyes at us.

“See! 90 percent! We’re definitely going to get out of the next one.”

In retrospect, we should’ve realized it would all be downhill from the Clown Room.

We posed for our Breakout fail photo, holding up signs that read, “#TrappedForever” and “His Fault” and “Her Fault.”

But that sinister clown did not break our spirit. We posted the photo on Instagram with the caption: “We’re not leaving this place until we manage to break out of at least one room!”

Marco asked one of the Breakout girls which room she preferred—The Walking Dead, which we were scheduled to do next, or Detention.

“Detention,” she said with a grin.

And because it was too late to change our booking and we were a crazy and competitive bunch, we decided to book the Detention room, too. Yes, we were doing all three Breakout rooms at the Katipunan branch in one afternoon and no one—no clown or zombie or teacher—could stop us.

While our friends were most excited about The Walking Dead, some of us were dreading it because we hated zombies. (By some, we really mean Tatin.)

As it turned out, The Walking Dead would become our most favorite Breakout room. 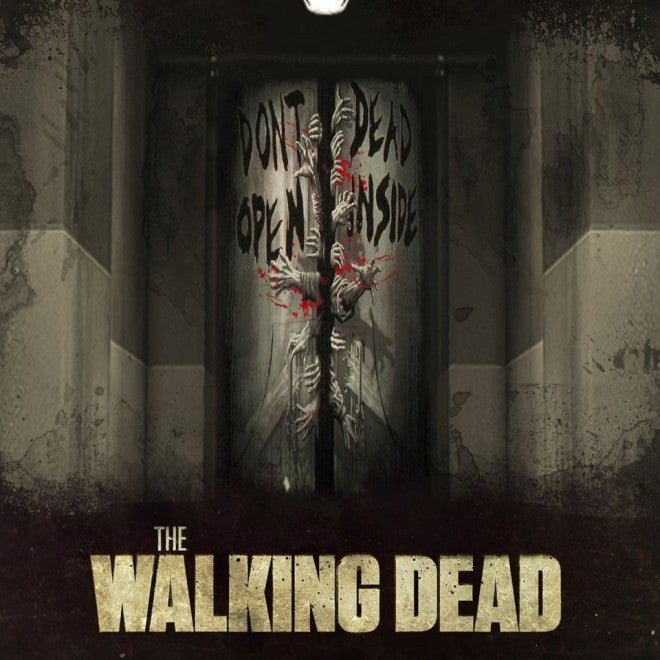 The awesome thing about The Walking Dead room: It will make you feel like you were stuck in a zombie movie.

The bad thing about The Walking Dead room: It will make you feel like you were stuck in a zombie movie.

Mark turned out to be the first one to become zombie food and also the one killed in a funny, campy way.

He was right. Adrenaline (and sheer terror) had given Mark the strength to run around brandishing an honest-to-goodness rubber tire as if it were a pillow, while screaming himself hoarse. When he realized the tire would not help, Mark, our muscular friend who could pass as a bouncer, started pounding on the door, screaming “Ateeeeeeee, ateeeeeeeee,” trying to get the marshals to come inside to rescue him from the (fake) zombie.

We were the ones eaten by zombies next because we couldn’t run from laughing hysterically at Mark. “Okay na ako, sulit na ’to kahit ’di tayo makalabas,” Pam said, bent over, tears of laughter flowing from her eyes.

“Kuya, are you on Grindr?” we asked the growling zombie as he terrorized our friends.

“No, he’s on Growlr, because he’s growling!” Pam quipped, still laughing hysterically in a corner.

But hysterical laughter can easily transform into hysteria and horror. Because Pam soon found herself grabbing onto Mark, who was using Marco as his zombie shield, forming what can only be described as a conga line from horror movie hell. She kept screaming and tripping over boxes in an attempt to run away from the zombie.

“Stop running! Masusugatan kayo niyan!” said Jill, obviously the clear-headed one in the group (possibly the lone, bloodied survivor in the movie version). She and Jason paid the zombie and the cacophony of screaming no heed, methodically going through the room and the multitude of boxes looking for the way out.

We reached the last door that would lead us to freedom. It felt like a miracle, especially considering that half of us did nothing but laugh or scream or both. “Dali, sabi nung zombie umalis na daw tayo,” Tatin said. “Hindi niya tayo makakain kasi wala daw tayong brains!”

Just like in the Clown Room, we were stumped. But we still felt like winners because we were incredibly entertained and we came out with our pea brains intact.

We had one final shot at redemption: Detention.

Unfortunately our stint at Detention was also a big, fat zero—our biggest failure because we didn’t even come close to getting out. We turned that classroom upside down and achieved nothing. 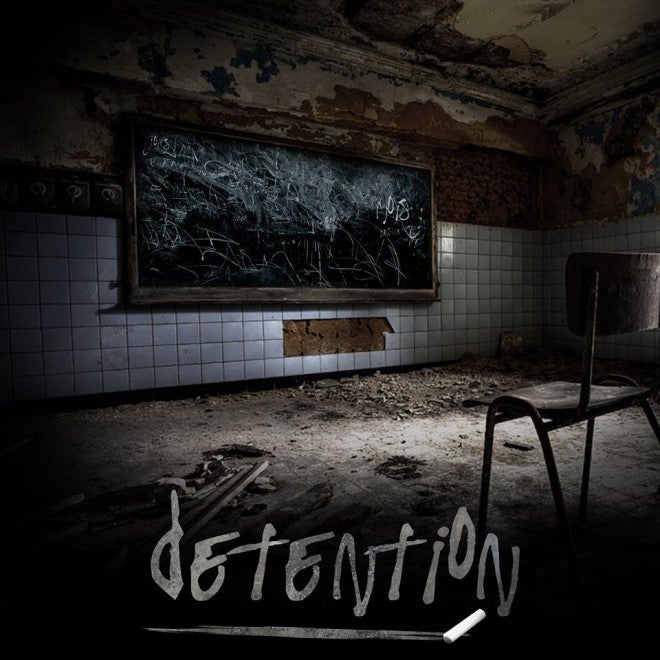 At this point, Jason was having a meltdown, unable to comprehend how six reasonably smart people couldn’t escape a room of puzzles.

“Please! Just tell us where that one key is! Please!” When our time was over, we begged, bribed and did everything we could to get the Breakout girls to tell us but they were unrelenting.

We slumped out of the room questioning everything: our IQs, our ability to become detectives (all those years we spent watching “CSI” and playing Professor Layton were clearly a waste), our friendship.

There is a wall in Breakout where photos of finishers are proudly posted. We wanted our smug, smiling faces up there as well, but at this point, it would’ve been easier to have our pictures printed at the Wonder Photo Shop in UP Town Center and sneakily place them on the wall instead.

Still, we’re not giving up. We’re already planning to invade Breakout’s Paragon Plaza branch next. And, yes, we want to do all five rooms in one day.

Ready for your own Breakout experience? Visit breakout.com.ph.

Increase your odds of escaping with these tips