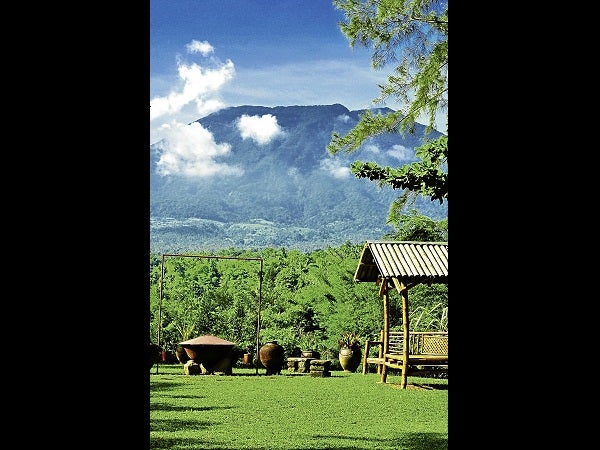 My friend, the mystic mountain 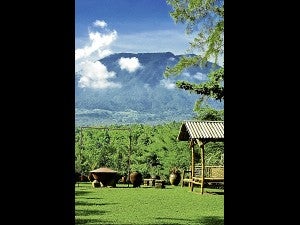 At dawn, before the sun breaks in the eastern sky, this shadowy colossus, shaped like an inverted Noah’s ark, confronts me. He’s Mt. Banahaw, my mystic mountain.

He dominates the front yard of my country home that sits on a promontory, edged by rainforest, in my old hometown, Majayjay, Laguna.

As soon as I wake up, I sit by the veranda like a dutiful son to pay homage to my mystic mountain, in between sips of piping hot kapeng barako.

Mt. Banahaw is veiled in a mysterious gray mist. I do not know what profundities my mystic mountain will reveal to me.

He’s a chameleon with many faces and many moods. He can be a merry blue in summer or dewy green in the rainy season, morose and hazy during typhoons. I’ve seen him unfold his rugged details—crevices and meadows, peaks and valleys, hillocks and holes, ravines and gullies, and sinewy shapes that point upwards all the way to the pearly gates. Changing hues. Changing shapes. It’s poetry in motion.

On a bright day, clouds of heavenly grandeur glide by, and my mystic mountain kisses each one of them.

On rain-drenched days, foamy white lines appear on his expanse. They are swollen waterfalls. Mt. Banahaw is full of earth holes that gush forth virgin spring water. Malinao in Lucban, batis ng Liliw, tubig ng Nagcarlan, Olla and Dalitiwan rapids of Majayjay, Maimpis and Balanak rivers in Magdalena that babble all the way to Laguna de Bay. Banahaw waters are thirst quenchers—icy cold and invigorating.

Banahaw overwhelms. He is geologically prehistoric. Thousands of years old, having burst forth from the bottom of the sea as tectonic plates shook, rattled and rolled, he detached himself from the land mass, obliterating the land bridges which connected our islands to the humongous Asian continent.

Banahaw is epochal in our history, having ushered our archipelagic ancestors to a Christian civilization and quasi-representational form of governance. Right under his feet, in 1571, a young and dashing conquistador, El Capitan Juan de Salcedo, came to pacify our forebears, led by Gat Yantok. Franciscan friars followed and launched non-stop evangelization, by erecting a tuklong (bamboo chapel) with a bell tower on top of the highest hill.

Like most iconic mountains in our planet, Mt. Banahaw shares deism roles with Mt. Sinai in Jerusalem, where Moses spoke with God; Mt. Ararat in the Turkey-Iran border, where Noah landed his ark after the flood; Mt. Olympus in Greece, where ancient philosophers housed their figment-of-the-imagination deities; and Mt. Fuji, the perfect beauty in Japan where Japanese lose themselves in the inner tranquility of Zen buddhism.

Banahaw dwellers bestowed my mystic mountain with biblical powers and imaginary cults that gained credibility through the years among barrio tribes of simple faith. In the bosom of my mystic mountain lies Kinabuhayan, a hallowed spot where a mountain spring with curative water flows endlessly.

Kinabuhayan is the spot where Jesus Christ is risen from the dead after his Crucifixion (Don’t ask why it’s in Banahaw, and not in Golgotha).

On Sabado de Gloria, I was circumcised beside the Malinao lagoon hidden at the foot of the mountain. The magtutuli, the town’s barber, used his shaving razor to cut the foreskin off my trembling penis. Jumping into the frosty cold lagoon right after was the anesthesia, and chewed guava shoots plastered to my penis wound were antibacterial. I became a man by ending my supot years in the rainforest of Mt. Banahaw. I was 10 years old.

Elsewhere during Viernes Santo near Kinabuhayan, men who possess anting-anting tested their vulnerability against bolo wounds. “No wounds!” they proclaimed after they cut their skin with their newly sharpened knives. Their anting-anting worked, as long as one uttered the prescribed Latin incantations every night, according to Katipuneros who wore their anting-anting in battles during the revolution against Spain.

There are moments I fear my mystic mountain. This colossal earth protrusion is a living, breathing volcano! He erupted 200 years ago. His fossilized lava, hardened magma and volcanic boulders are scattered on the outskirts of Sariaya, Quezon. His belly still smolders with liquid fire. Who knows when my mystic mountain will blow his tops? But if he does, I’ll let him be! He needs to let off steam.

But today, as I commune with my mystic mountain, I feel his intimacy and caring. He heals when I’m ailing, calms when I’m listless, and laughs when I’m winning.

Anybody out there who needs a mountain for a friend? Go find one!

A mountain will integrate you with the composite wonders of God’s creation. You can feel it.

Minyong Ordoñez is a member of the Manila Overseas Press Club. E-mail him at  [email protected] com