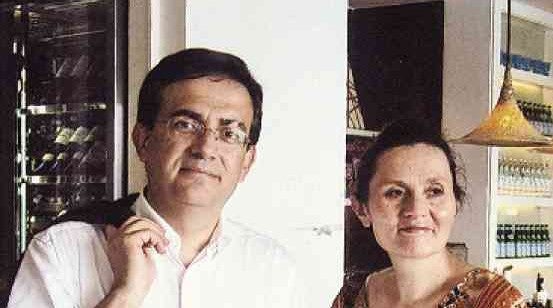 THIERRY Mathou, the new Ambassador of France to the Philippines, recently visited Cebu with his lovely wife Cecile.

They were billeted at the Marco Polo Plaza Hotel.

There was a dinner in their honor hosted by the honorary consul of France in the Visayas, Michel Lhuillier, and his wife, Amparito Llamas Lhuillier, at home in Maria Luisa Estate Park.

Although it had been raining the previous days, that evening had clear skies and twinkling stars. Guests gathered in the gazebo to sip champagne and nibble canapes made with foie gras and scallops.

Dinner was served in the formal dining salon where the long table bloomed with exotic flowers and sparkled with fine porcelain and glassware bearing the signature of Monique Lhuillier, youngest daughter of Michel and Amparito.

The menu was splendidly prepared by French chef Adrien Guerrey. It started with a delicious lobster bisque and rolled smoked tanigue with herbs. Main course

was grilled sea bass smothered with carrot and coriander

Chef Adrien himself wheeled out a cart laden with exquisite French cheeses. We counted eight varieties and would have, as someone suggested, tried them all. Tops was the “Brie aux Truffes.”

For dessert there was an individualized calamansi meringue tart served with Baguio strawberries. Michel, being a health buff and looking younger than ever, offered turmeric tea when it came up as a topic of conversation. It is a natural anti-

It was a wonderful evening and, if it ended before the stroke of midnight, it wasn’t for fear of turning into a pumpkin, but because the ambassador and his wife had a full program the next morning.

“I am not tired at all,” protested Ambassador Mathou, and Vice Gov. Agnes Magpale said she could have stayed on all night. Such was the mood, the repartee and the new friendships forged with the guests of honor.

Next day, Ambassador and Ms Mathou took the Lhuillier helicopter to visit Bohol. The Chocolate Hills were an enthralling sight that particular day. They were enshrouded in mist that gave them a surreal, fairyland quality.

The Mathous were back in Cebu in the afternoon, ready for another dinner in the evening. This time it was at La Maison Rose, the French restaurant that is within the complex of Alliance Française de Cebu.

It was a short weekend visit but a most memorable one. “We must come back,” Ambassador and Ms Mathou told Michel and Amparito over brunch at Shangri-La Mactan before taking the plane back to Manila.

Carlos and Mariquita Yeung are overjoyed. Their daughter Carla and Christopher McKowen have made them grandparents for the third time. After two boys, Harrison and Cameron, this time it was a girl.

She was christened Katherine Mary at the St. Therese of the Child Jesus Parish in Lahug by Msgr. Roberto Alesna who also officiated the Holy Mass that followed.

There was a family luncheon with the godmothers at Villa Mariquita where, later that evening, there was a grand celebration with numerous guests in attendance.

They sipped champagne and nibbled on thin-crust pizzas with melted cheese and truffles. There was a grand buffet dinner with carving stations for the typical Cebu lechon, and prime rib of roast flown in from Hong Kong.

On another occasion, Carlos and Mariquita Yeung hosted a dinner at the Tsaid Cheng restaurant for their dearest friends, the Philippine Ambassador to Portugal Philippe Lhuillier and his wife Edna Diago Lhuillier who came with their children Andrei and Carmen.

It was fun reminiscing stories from old Cebu, with Teresin contributing some precious anecdotes.

Silkair held an Appreciation Night for its top five Cebu travel agents at the Manila Room of the Marco Polo Plaza Hotel. Plaques were presented by Ganesh Perumal, general manager of Silkair for the Philippines, based in Cebu.