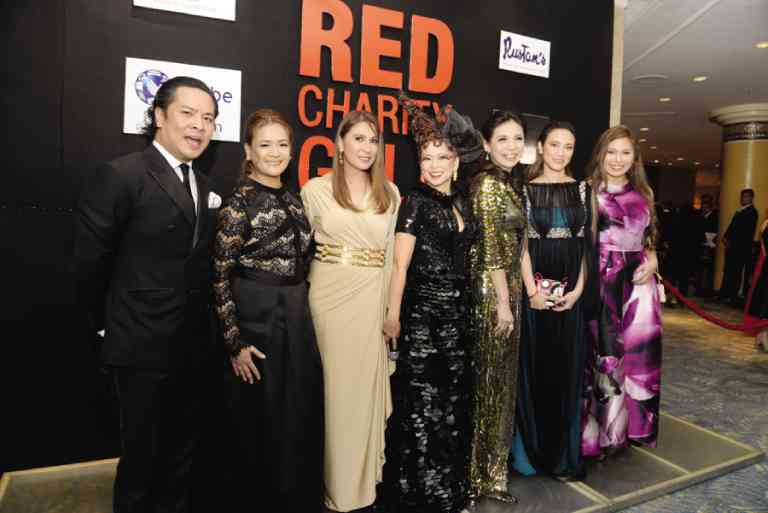 Giving credit where it’s due

FOR ITS seventh edition, the Red Charity Gala delivered an outstanding evening of Philippine high fashion and philanthropy, thanks to very generous sponsors and friends. Featuring the glittery masterpieces of London-based fashion designer Lesley Mobo, the main event was preceded by an explosively exciting, mini Bench Underwear Show.

There is so much about the Red Charity Gala that I want to write about, but I want to start with its main purpose: charity.

Every year, my ever gracious cochair Kaye Tinga and I challenge ourselves to raise as much funds as we can for our chosen charities, Philippine Red Cross and Assumption High School ’81 Foundation. This means our initial planning sessions focus on sponsors to support the show, including those who have helped us over the years and scouting around for new ones as well.

Kaye and I also look for wonderful brands that our elegant guests might be interested in, and we like to have these items as giveaways after the show.

This year, the swag bag included gifts from annual supporters like Adworks Graphics, Coca-Cola, Gardenia, Goldilocks, Sun Life and W/17. We had additional gift packs from Lindt chocolate and Te Amo Floristeria. There were so many giveaways that we created a swag room, just like the Oscars.

We were delighted to have Rustan’s power couple Donnie and Crickette Tantoco, and Megaworld’s prime couple Kevin and Michelle Tan. Makati Shangri-La general manager Alain Bogers and his lovely wife were happy to see the ballroom packed with guests.

The cocktails were held at the mezzanine of Makati Shang’s lobby. Globe Platinum set up a lifestyle section right next to the Manille liquor bar. Next to the photo wall was the well-lit bar of Cointreau serving delightful mixes made from the classy liqueur.

At the lobby of the Rizal Ballroom, Remy Martin had its own bar. As guests walked into the foyer of the ballroom, a feast of 12 incredibly buff, hot models wearing nothing but Bench underwear greeted them. Our featured designer Lesley Mobo created a Bench underwear line, hence the tie-up. I was just excited to marvel at all the abs one event could ever have!

In the ballroom, our Gala director Ariel Lozada created a dramatic stage setup with the beautifully arranged table setting of the Robert Blancaflor Group. Our florist and events man Robert has been annually supporting our Gala pro bono. We truly owe him so much.

Our PR guru Edd Fuentes has been another loyal supporter over the years. Thanks to his efforts, we have no shortage of media mileage to give back to our generous supporters.

After Kaye and I welcomed the guests, we had our check donations presented to our two beneficiaries.

After them, Albert Arcilla of Volvo Philippines handed a contribution to Assumption HS ’81 Foundation. My high school classmates gamely had a photo op with Albert.

As the sumptuous dinner was being served, balladeer Arthur Manuntag and his son Sean Paolo serenaded the guests to the delight of my parents, Alex and Marixi Prieto. Also giving the crowd a couple of songs was Aliya Parcs.

It was a reunion of sorts for Arthur, Sean, Aliya and I, as we had all been part of Arthur’s solo concert, “Bennett and Me,” at the Newport Performing Arts Theater at Resorts World Manila just a few weeks earlier. I was so glad to be part of that concert, singing a duet with Arthur.

The Red Charity Gala’s live auction is also a big part of our fund-raising effort.

Rustan’s, one of our major sponsors, additionally gave a pair of Piaget Rose earrings for auction. The beautiful piece, set in 18-karat pink gold, was set with three brilliant-cut diamonds.

Not to be outshone was the super-long, pearl strand necklace donated by Jewelmer. The Jewelmer Joaillerie strand was presented to the Aivee Teo family that always gamely makes a bid yearly. Jewelmer’s Jacques Branellec was pleased to see the high auction price the pearl strand commanded, as it was all for charity.

Our biggest-ever auction item was the Alphaland Balesin Island Club share. This Gold Membership retails for P2.2 million and the winning bid topped that figure, a testament to the charitable people who come to the Red Charity Gala.

The Balesin membership is bound to give the winner a lifetime of memories in the beautiful island, and is well worth every centavo.

Next week, I’ll focus on the incredibly outstanding fashion of Lesley Mobo and the Bench Underwear presentation.