Where the wondrous had become real | Inquirer Lifestyle ❮ ❯ 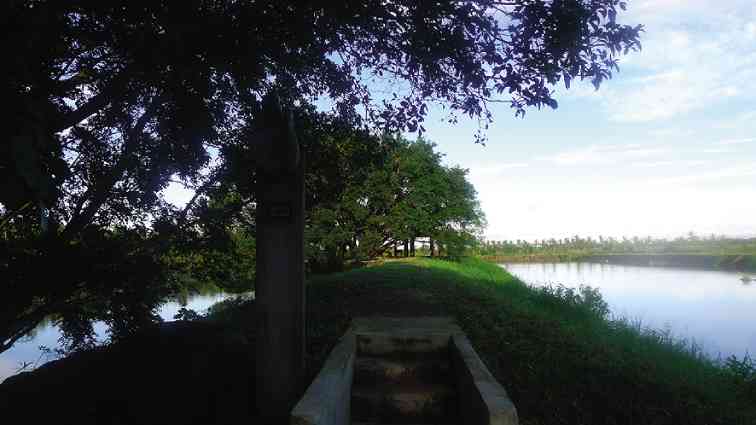 THE PUNONG or fishpond by Hacienda Tinihaban in Silay

Where the wondrous had become real

It had been 20-odd years since I was last in Silay, and driving through the dated streets of the city, we noticed how nothing had changed except, perhaps, for faded paint and a few broken windows.

Our ancestral house along the old Plaridel Street was still there as it always will be, for me.

Suddenly, I heard the laughter of my childhood, of summers with grandmother, aunts and uncles, and first cousins.

I felt the presence of Papa Nene, man of the house, our youngest uncle, who was remote and silent except when we touched on the one subject that made him come to life: William Shakespeare.

With enthusiasm so contagious, Papa Nene often called us to his study— a motley group between six and 16— where we listened in awe to the soliloquies of John Barrymore and Laurence Olivier, again and again, until we became sensitive to their nuances of pause and inflection.

At the age of 10, I could not decipher meanings but even then, I was enchanted with the eloquence of the words and the cadence of something close to divine.

Papa Nene delighted in teaching us his favorite scenes from “Hamlet” and “Henry V.” He directed with flourish as we rehearsed and giggled, and forgot our lines sometimes. Although we had neither costume nor audience, we performed with commitment and aplomb.

I remember my cousin Ed, then a chubby little boy, making his entrance gingerly holding a real skull that represented Yorick in Act 5 of “Hamlet.” And I still recall my favorite opening lines in the Prologue of “Henry V”:

“O for a Muse of fire, that would ascend

The brightest heaven of invention.

A kingdom for a stage, princes to act

And monarchs to behold the swelling scene…”

It may have seemed like an unorthodox childhood where fun and togetherness meant doing Shakespeare. But especially after the war— in a living room lined with family portraits—it was the liveliest form of play.

Easily 50 years have passed since we were last together, four first cousins—Nelly, Ed, Adolf and I—all known by the surname Ledesma. We were children together, who had lived disparate lives in differing cultures.

Now in our 70s and 80s, our minds still sharp, our hearts alive with gladness, we were walking among the fields of the hacienda, knowing that through all our yesteryears, we were rooted in the land.

Our intimacy with the hacienda was nurtured during World War II when we evacuated there. We never experienced the ravages of devastation, but only children’s play and serenity and an occasional plane flying low.

This was the farm we knew, the farm I now came to visit for three days too brief. So much had happened since then.

The adjacent haciendas of Lonoy and Tinihaban in Silay once belonged to our grandparents, Consuelo and Delfin Ledesma. Today they are owned by cousins and cousins’ children.

And so when Adolf pointed out to me, “Look, those are your canes,” his words had the powerful impact of bonding me with the earth and with a legacy.

Our coming together was not about owning a piece of land, but about belonging to the land, to the fields that reached out to forever. It meant winds that whispered memories and gentle rains that showered us with grace.

From the perspective of time, it signified our awakening to the needs of a place given to our care.

Next to Tinihaban, Ed developed a punong, a fishpond of quiet splendor that glistened when the sun shone upon it. With the masterful eye of an architect, he built casita for each of his children, white structures that blended beautifully with giant old trees.

We spent time there, but rather than speak of the vanished past, we looked to the future of our farms and the gems that lay within them.

Lonoy Adolf, with profound generosity, focused on the needs of the obrero, many of whose families have worked in the hacienda for close to a hundred years. After retiring as senior vice president of PDCP, he built a ballpark for the children and encouraged their interest in sports.

He initiated Project Hope, a dynamic program that is constructing homes and restoring old ones, replacing broken pipes and creating a wonderful plaza to foster a humane environment. Recently, the curious from neighboring towns have been coming to see it, and they have been inspired.

At the heart of this vast expanse was Nelly’s wonderland: her personal library, clearly reminiscent of Papa Nene’s lively influence.

“He made me discover the enchantment of books!” she said. “I remember him telling me the beginning of Sir Walter Scott’s ‘Ivanhoe’ and when I got all caught up, saying, ‘Now read the book and find out the rest of the story!’ We did some brilliant ‘Shakespeare trips’ to Stratford-on-Avon in England and Canada.”

Nestled amid fields of sugarcane, wild flowers and a quaint herbal garden, Nelly’s library was a sleek, high-ceiling structure that housed 5,000 books of scholarship, each one loved and read, with pencil markings along crisp, white margins. The titles ranged from our grandfather’s medical textbooks to the works of T.S. Eliot, Rainer Maria Rilke, Robinson Jeffers, and the Temple edition of the masterpieces of the Sisters Bronte, only two sets of which are known to exist.

Some books were acquired when Nelly and her cousin, Doreen Gamboa Fernandez, went on a treasure hunt to Hay-on-Wye, the National Book Town of Wales, before the world began flocking to its literary “Hay Festivals.”

Designed by Ed, the library included a master suite where Nelly lives with no TV to distract her or newspaper to disrupt her quietude. Here, surrounded by silence, the art of stillness could deepen. I stayed with her.

In one of our long conversations, she expressed, “Living with books in land you belong to means life in God’s country. Can anything be better than this?”

It was then I truly felt that in the heart of our hacienda, the wondrous had become real.