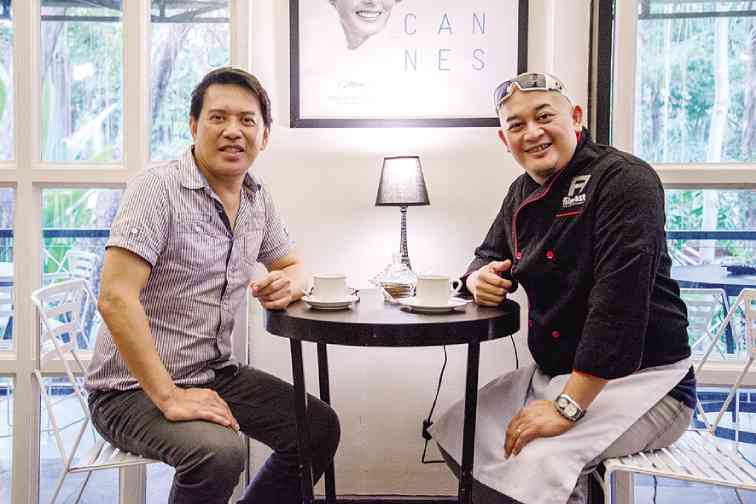 Leave it to maverick film auteur Brillante “Dante” Mendoza to take the path less traveled in creating a café and dining experience.

Located far from the madding crowd, in a quiet neighborhood in Mandaluyong, Filmfest Café and Restaurant is actually inside the Centerstage Production compound, Mendoza’s film production studio.

As one might expect from a filmmaker who started out as a production designer, the café is impeccably lit, with chandeliers and table lamps creating a cozy, relaxed atmosphere.

In keeping with the film festival theme, posters from the Cannes Film Festival as well as Mendoza’s award-winning movies such as “Kinatay” and “Captive” form part of the decor. A large LCD screen is mounted on the far wall for the regular screenings of Filipino and international films.

The main dining hall opens to an al fresco terrace and bar that overlooks a lush courtyard garden, where one can imagine more intimate scenarios taking place.

The real star attraction, however, is the food, which is Filipino-Asian fusion for the most part. Mendoza’s partner, chef Allan Garcia, is a fellow Kapampangan who has worked in Thailand and Singapore, and his dishes introduce subtle Southeast Asian twists to solid Filipino favorites.

Mendoza gives what Filipino diners want: generous servings, reasonable prices, an easy and relaxed atmosphere in which patrons can talk about films or anything else to their hearts’ content without waiters hovering with the check.

As a bonus, one might get to see a celebrity or two. Matteo Guidicelli and Shaina Magdayao, who shoot their Cinema One miniseries “Single/Single” here, might pop in for a bite after they wrap. Director Paul Soriano and Toni Gonzaga have been spotted on occasion. And once in a while, Mendoza’s muse, Nora Aunor, might make an appearance.

Over a soul-satisfying repast of Crispy Pata Kare-Kare (which combines the two favorites into one dish); Salmon Belly Sinigang sa Miso; Flying Tilapia (the fish filleted and deep-fried until crisp); and Bagoong Rice, washed down with birdbath margaritas, Mendoza regales us with stories from his pre-fame days as a production designer and assistant director to the original pistol-packing enfant terrible of Philippine cinema, Celso Ad Castillo.

Castillo would show up on the set without a script, recalls Mendoza, who would have to scramble to find the needed props in whatever godforsaken location they happened to be in, at 2 in the morning.

One time Mendoza had to physically intervene between Castillo and the producer, both of whom were armed and threatening to shoot each other.

“My experience was my education in filmmaking,” says Mendoza, an advertising major who never attended film school. He had wanted to direct since he was 22, but the high cost of 35mm film stock kept him from realizing his dream.

It was only with the advent of digital video in the last 10 years that he was finally able to make the independent films that have won him accolades and, arguably, made him the most recognizable face of Philippine cinema in the international festival circuit.

One of Mendoza’s forebears, Ishmael Bernal, also opened a couple of artist’s cafés—When It’s A Grey November in Your Soul in Malate during the swinging ’60s, and Kasalo in Quezon City in the early ’90s until his untimely death.

The Filmfest Café and Restaurant, however, has more prosaic origins. Mendoza and his crew got tired of having to order takeout after long production meetings or film editing sessions. They also needed a place to unwind and decompress after a long day’s shoot.

“In the different film festivals I’ve attended, there’s usually a place like this where artists and filmmakers can meet and eat, drink, have coffee and discuss films,” says Mendoza.

Filmfest Café is designed to be that kind of congenial spot.

The fatal flaw in most “artist’s cafés” is the often indifferent food, whose main purpose is usually just to buffer the patrons’ insides against the expected prodigious alcohol consumption.

In contrast, the Filmfest Café offers real food—the Kapampangan in Mendoza wouldn’t have it any other way.