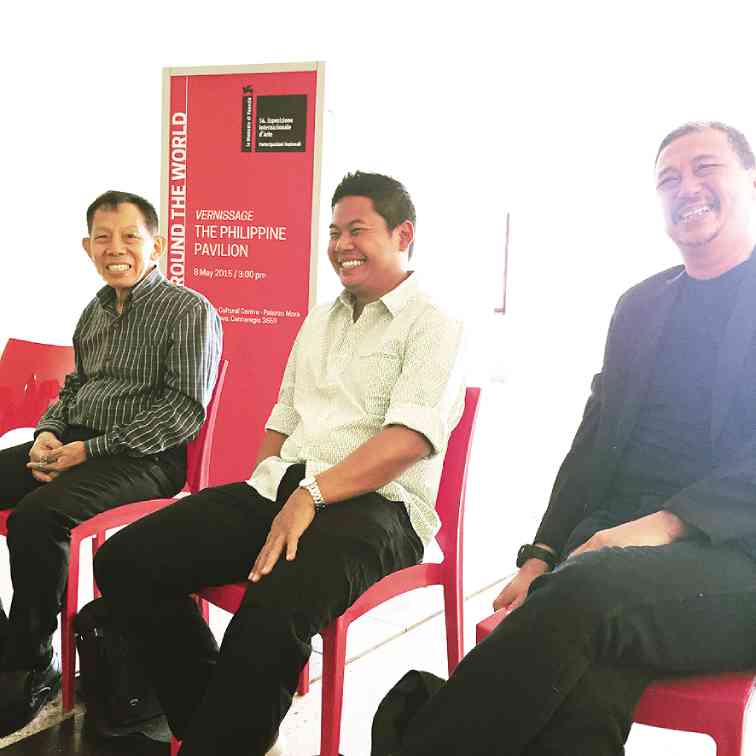 NATIONAL Commission for Culture and the Arts Chair Felipe de Leon Jr., filmmaker MarianoMontelibano III and intermedia artist José Tence Ruiz share a light moment at the press preview before the formal opening of the Philippine pavilion at the 56th Venice Art Biennale.

A man gathers his fishing net to harvest his catch. Two friends walking side by side along a narrow, unpaved road separate to give way to a motorcycle rider. Fishmongers sit on the side of a market road while buyers examine their wares.

Barangay Buliluyan sits on the southern tip of Palawan, and would have been just another bucolic town forgotten by imperial Manila had filmmaker Mariano Montelibano III not recorded 22 hours of raw footage, trimmed the track to 20 minutes and showed the product before audiences at the 56th Venice Art Biennale.

“A Dashed State” began filming in November 2014. Montelibano, a Bacolod-based media artist, said his idea to film in Buliluyan began long before Patrick Flores, professor at the Department of Art Studies of the University of the Philippines, informed him of his curatorial concept “Tie A String Around The World” that would be the theme of the country’s pavilion in the biennale.

Montelibano’s work now plays in a nonstop loop in one of the stanzas or rooms inside Palazzo Mora, the historic mansion owned by a succession of prominent Italian families that now houses the Philippine pavilion of the Venice Biennale.

The film plays provincial scenes like that of a pregnant mother and child polishing rice, or close-ups of juvenile fish joining the rising and ebbing of the tide.

Montelibano also commissioned a drone to take overhead shots of the sea and house roofs, as if to indicate how peaceful the barangay is.

Watching the film as three cameras simultaneously project different sequences on three palazzo walls would be a relaxing experience, if not for the audio.

At the start, a tribal chant from the Kudaman epic of the Palawan tribe recorded in the 1970s plays in the background.

Descendants of the tribe still live in Buliluyan. In fact, one of them was shot on video inside a   sari-sari store that sells smuggled Malaysian goods.

As Mariano utilizes micropolyphony to morph the chant into something akin to underwater vibrations, radio signals from nearby Chinese military vessels begin to disrupt the relaxing ambient sound.

Until the film finishes, these intrusive radio signals would hover in the background.

The 1950 film “Genghis Khan” that Flores uses as curatorial takeoff has Tagalog dialogue overlain with the English narration of American writer-critic James Agee when it was shown in the 1952 Venice Film Festival.

The curator notes that Montelibano’s work also has the audience double-hearing both the Kudaman chant and the Chinese signals, just like in the film of Manuel Conde and Francisco “Botong” Francisco.

Still, Montelibano insists “A Dashed State” is not necessarily a political statement about Chinese intrusion, despite early suspicions that it was.

“I wanted to show the people’s normal life and then juxtapose it against the tension. Hindi nila alam na may ganun,” he told Inquirer Lifestyle in a one-on-one interview.

Montelibano has done full feature and short films, television commercials and documentaries. His trademark is the inclusion of “text, noise and other effects” as he comments on “environmental changes, socio-economic disparities and power structures.”

His video installation “Sorry For The Inconvenience” hurls footage of powerful people giving speeches. Its “jarring sounds” and “hectic visuals” caught attention in the 2013 Singapore Biennale.

True enough, there is nothing about Montelibano’s film showing in Venice that indicates anything about China or its controversial military presence in Philippine territory, except for the radio signals.

What Montelibano wants to stress but not discuss overtly are “intrusions” like pirates “from Mindanao” that take random captives from among the locals, hence the presence of soldiers. Big fishing boats that are obviously not owned by the locals are another.

“The intrusion of culture is not only through political territories but also through cultural territories,” Montelibano said to explain the radio signals heard in the film.

These signals are a means for Chinese soldiers to communicate with one another, yet the local radios catch them.

“Intrusion can cause confusion. Just like in any place around the world. Intrusions happen all around the world and are not exclusive to Buliluyan or any area in the Philippines,” he said.

Montelibano said the film’s message is how intrusions could be the start of new boundaries.

“Think of what is happening around the world. In the Middle East, in Russia. Lahat ng mga boundaries ngayon gusto nila i–define or redefine,” he noted.

Buliluyan may be a small community, but it could be a ripe example of how “the world is changing without the people knowing it. Maybe it’s good that the people are not aware, or maybe it’s bad. Sometimes the knowledge gives you anxiety,” Montelibano said.