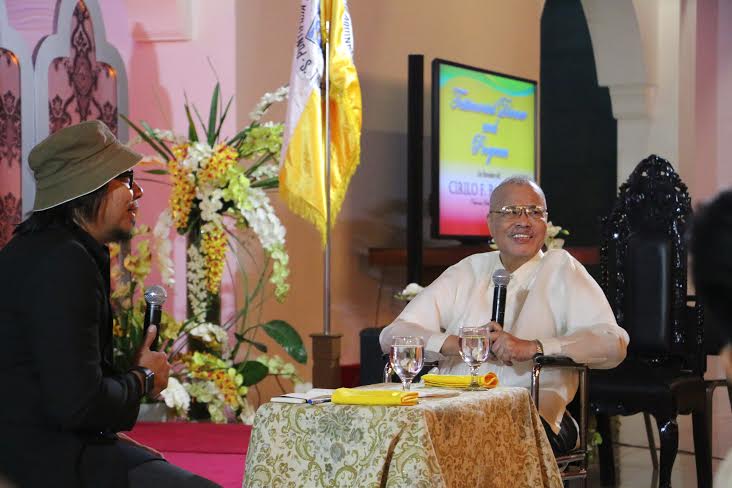 CIRILO F. Bautista is, at heart, a romantic.

Asked by broadcast celebrity Lourd Ernest de Veyra the most beautiful thing he had ever seen in his life, eminent poet Bautista answered without missing a beat: “My wife, Rosemarie.”

To the catcalls and whistles of people in the magnificently lit Grand Ballroom of the Blessed Buenaventura Garcia Paredes, O.P. building of University of Santo Tomas, Bautista added with a boyish grin: “It’s probably a cliché, but when I first saw her, I thought she was an angel.”

That is why he is a poet. And he has won the most coveted literary awards in the Philippines for it.

And when UST—Bautista’s alma mater, where he studied at the old College of Liberal Arts as an English major—lays claim to yet another National Artist for Literature, it goes all out.

So the university that produced him chose to hold a fitting tribute organized by the UST Center for Creative Writing and Literary Studies.

The “conversation” hosted by De Veyra was part of the program of the testimonial dinner given in honor of Bautista.

He was just one of the eminent names in Philippine literature who graced the event. Other poets—Bautista’s friends and students from his days as a senior associate in the old UST Creative Writing Center under the late Ophelia A. Dimalanta, as well as colleagues from his teaching stint at the De La Salle University—read and interpreted his most famous poem.

Gémino Abad impressed the audience by reciting from memory two of his favorite poems by Bautista—one, expectedly, had been written for Rosemarie.

De Veyra asked him what the award meant for him, exactly.

“It is a kind of confirmation,” Bautista said thoughtfully, “that after 74 years, you know you can write.”

His latest poetry collection, “Things Happen” (UST Publishing House, 2012), is full of intimations of mortality, of how people deal with loss. Bautista touches on issues of nation and social justice, as well as the craft of poetry. There are also references to the Catholic imagination.

Bautista’s images are drawn from everyday activities, such as walking through a mall (“Window Shopping”); or merging the fantastic with the ordinary, as in walking into a room and finding his guardian angel sleeping off the exhaustion of the world (“The Guardian Angel”).

Here it is as if the poet is deliberately employing an aesthetic that does not demarcate the mundane from the profound, and for the most part he succeeds in unearthing for readers through language a sagacity in the quotidian.

His images sometimes are jarring in their juxtaposition, but the architected space in the language construct brings to light a sophisticated insight which at times may be erudite, but never obscure.

His craft, he maintained, is one that is true to the pursuit of beauty.

“The poem is meant to give delight to the readers,” he said, emphatically.

While he acknowledged that “poetry is a kind of public communication… where everything [one says] has immediacy,” the audience must still, necessarily, derive pleasure from it.

Asked by De Veyra which book/s he would read over and over again, Bautista replied: “Shakespeare’s ‘Sonnets.’”

“He speaks to everybody,” the poet explained. “I go back to him for the simple truths about life, for how to look at life in a way that we don’t get disadvantaged, always searching for that one time we have become ourselves noble. He celebrates the humanity, the beauty of life despite blood and tragedy.”

De Veyra agreed, noting that Bautista as a poet might feel that the printed word imprisoned the language, so he wrote for orality in order for the musical cadences of the lyric to shine through.

It is for this reason that Bautista is “revered,” in the words of Fr. Rolando V. de la Rosa, O.P., former UST rector and current dean of the UST Faculty of Sacred Theology. Bautista will always embody the core values of being Thomasian and Catholic, the Dominican friar said.

“You once remarked that poetry is the monkey on your back,” De Veyra said. “Now that you are retired, is he gone?”

“The monkey does not want to get off my back,” Bautista replied with a laugh, adding that he was writing his next book of poems. “For artists, art does not just imitate life. Art becomes the life.”

That is perhaps the most romantic thing of all.