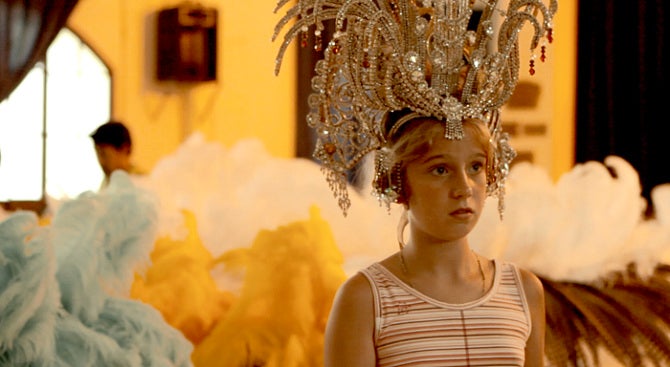 IN “LA REINA,” director-editor Manuel Abramovich delivers a striking perspective on one of his country’s biggest cultural phenomena: the carnival. The short film is among five works to be featured on the first-ever edition of the Argentine Film Festival, which runs Oct. 29-31 at Shangri-La Plaza Cineplex in Mandaluyong City.

We’re used to the depiction of the scale and flamboyant razzmatazz of Latin America’s feathery, glittery spectacle, so the impact of Abramovich’s work lies in it providing a stark contrast of sparseness and subtlety.

He introduces us to the youngster Memi, whose blond hair, plump cheeks and radiant, wide eyes draw our attention to wherever she’s situated in the camera frame.

The film opens with the child having just been chosen queen, to join an entourage of adult sovereigns who would, on the day of celebrations, parade in costumes fit for the theme “history of chocolate.” While that may come across as frivolous and utterly benign, the film would make it very clear the carnival is anything but.

“La Reina” may run less than 19 minutes, yet those are moments packed with clever little touches that amount to a powerful whole.

As queen, Memi is the center of the universe.

She’s positioned among adults you never fully see onscreen yet their busy hands, tending to the child’s hair or the fitting of her crown, and their loud chatting create an imposing presence. The youngster barely says anything—plus it’s not so easy to gauge what exactly she’s thinking—until the final sequence of the film, but her silence and wispiness could strongly hint at discomfort, annoyance, attention span or focus.

She’s into sports, playing competitive tennis and hockey, so we know that, though she may look delicate, she has the stamina for the sacrifices required to make royalty elegant and beautiful. Then again, does she, really?

The crown, which seems twice longer than Memi’s head and is generously hung with semiprecious stones, weighs over four kilos. The costume has enough plumage to wipe out a farmer’s poultry. And the horror stories from previous carnivals, of women taking pills or spraying on xylocaine to numb the pain caused by costume defects—can somebody as young as Memi endure it all?

The film doesn’t show the actual physical manifestations, but the journey audiences take with Memi to the day of her crowning glory will be one laden with palpable pain.

If “La Reina” is just a taste of Argentine cinema, then imagine the possibilities you could explore with the rest of what the festival has to offer.