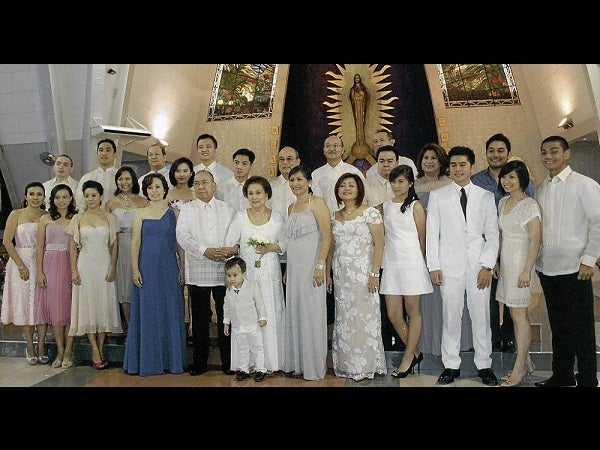 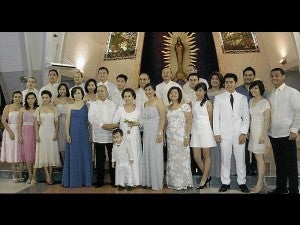 It was a diamond celebration for Rodrigo Gandionco and Julie Ramon Gandionco as they marked their 60th wedding anniversary with a Mass of thanksgiving at Sacred Heart Parish church.

Numerous grandchildren, one great grandson and a throng of friends and relations filled Salon de España of Casino Español de Cebu, where the reception was held. Jigs and Julie sat on carved thrones where everyone could pose for a photo with them.

He looked as dashing as the day on Oct. 14, 1951, when he took Julie as his bride, and she was lovely beyond words in an ivory white ensemble touched by glitter.

Julie’s brother Salvador Ramon had come from Dipolog for the festivity. From the US were Victor and Gertrudis Willert (she is Jig’s sister), Julie’s sister Pina with her husband Peter van der Mat, and dear “Nanay” Nena Gandionco.

Jigs and Julie had carefully chosen the music from a list of their favorite songs, softly played through the sound system as dinner was served.

The grandchildren had filmed and acted in a movie done in black and white in the style of the silent pictures. It depicted the celebrating couple’s first meeting, first date, the ensuing courtship, their wedding and early years of marriage when they agreed that family decisions would be fifty-fifty.

The formula has worked out well, considering how they have been blessed with a most loving family, good fortune and prosperity, which they have shared with countless others.

It is no secret that “Julie” has become a household name with all the Julie’s bakeshops all over the Philippines.

Jigs and Julie live in a cozy one-story home in Cebu’s Paradise Village, an elegant but no-frills subdivision where many of their relatives reside. It is one of the first residential enclaves of Cebu, ideated by the late Peping Martinez.

Ever conscious of sharing bounty, on this special occasion, Jigs and Julie asked all well-wishers that, instead of showering them with gifts, donations be made to two worthy institutions.

One was the orphanage and home for the aged Asilo de la Medalla Milagrosa; the other, Bethlehem Day Care Center at Cebu’s dumpsite, a project of Fr. John Iaconno, who was one of the concelebrants during the Mass.

More largesse may be coming their way as Julie has her 80th birthday today. From this end, we wish her many happy returns of the day, and may God continue to pour blessings on her and her family.

Speaking of birthdays, Cebu City’s good-looking Mayor Michael Rama had a milestone to mark on Oct. 28. It was open house all day in his office at City Hall with well-wishers streaming in to greet him and partake of nonstop feasting.

Gov. Gwendolyn Garcia dropped by, as did Carlos and Mariquita Yeung, as well as French Honorary Consul Michel Lhuillier with his wife Amparito.

In the evening, Mayor Mike was at his favorite watering hole—Gabriel Palmer’s Wine Shop along Gorordo Avenue. The live band blared its repertoire and there was no space to drop the proverbial pin on the packed dance floor.