Saying ‘I do’ with Bulgari | Inquirer Lifestyle ❮ ❯ 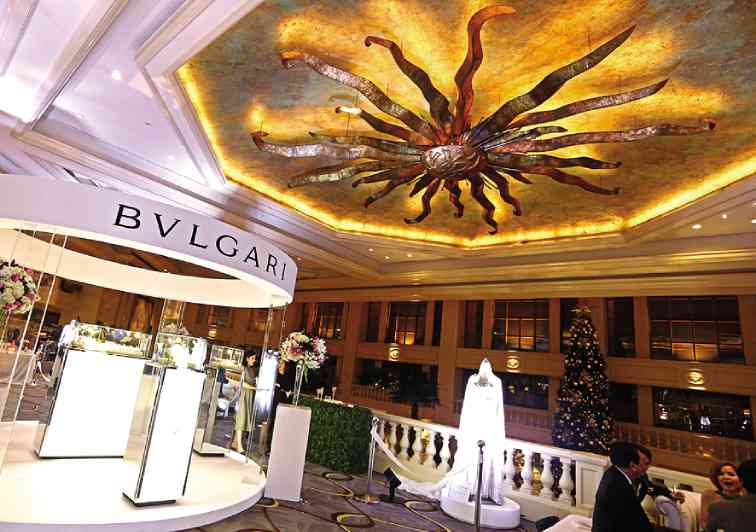 BULGARI’S set up at upper lobby of Peninsula Manila

Saying ‘I do’ with Bulgari

After being introduced without much fanfare to Filipinos two years ago, Bulgari’s line of engagement rings and wedding bands was formally launched last Thursday at the Peninsula Manila’s upper lobby.

The event coincided with the launch of “I Do! An Insider’s Guide for Brides,” The LOOKBook and Inquirer Lifestyle’s latest hardbound title written by Carmencita Sioson, Stefanie Cabal Rostoll and Ronna Capili Bonifacio.

“Bulgari has always been into engagement rings, but they were more for the Japanese market,” said Mario Katigbak, GM of Bulgari in the Philippines. “But during the past two years, we have been slowly building up our line of wedding bands and engagement rings locally.”

Katigbak was initially hesitant to launch the line because people might not understand why the Rome-based jewelry brand’s prices are higher compared to other brands.

Now that a growing number of couples know and appreciate the superior quality that goes into each piece of Bulgari jewelry, Katigbak said he feels the market is ready.

“With the improving economy, I’ve noticed that Filipinos’ decision to buy a diamond engagement ring is now dictated more by quality instead of size,” Katigbak said.

Unlike certain nationalities, Filipinos still prefer diamonds to colored gems like sapphires, emeralds and rubies for their engagement rings. Bulgari offers 10 designs with diamonds measuring anywhere from .5 to two carats.

All stones are certified by the Gemological Institute of America, and are set either in 18-karat white gold or platinum.

“Usually, the bigger the stone gets, the more difficult it is for jewelers to find the right quality,” Katigbak explained. “That’s why, when you go for a three- to four-carat engagement ring, it could very difficult to source and very expensive.”

Not a few Filipinos in the past were willing to sacrifice quality for bigger stones. But this isn’t the case anymore, Katigbak said.

Fortunately, customers are assured of getting only the best from Bulgari because it strictly adheres to high standards in terms of color and clarity of the stones it offers.

“My staff are well-trained to help guide couples in making the right decision,” Katigbak said. “Basically, we try to steer them toward quality instead of size.”

Katigbak also vouched for the “sturdy” quality of Bulgari’s engagement rings. Women can now wear them every day without worrying that the stone might fall off.

“It’s a real and valid concern,” said Katigbak. “Bulgari has perfected the art of setting its stones securely without damaging them. Prongs that hold the stone together are really sturdy.”

The same quality and attention to detail are present in its line of wedding bands. Bulgari offers eight his-and-hers designs made either of platinum or 18-karat white gold, including a pair inspired by its iconic B.zero1 ring.

A few of its wedding bands have stones, while others, to cater mostly to men, don’t.

“They may or may not buy matching wedding bands,” said Katigbak. “As much as possible, we try to guide them in buying rings that complement each other. In the woman’s case, her wedding band should also complement her engagement ring.”

Their choice of wedding bands would depend a great deal on their lifestyle. Since women usually wear their engagement and wedding rings together, it’s a must that the two should not clash.

B.zero1-inspired wedding bands in white gold are very popular among Filipinos because of their simplicity and subtle branding.

Tradition dictates that the man buys his future wife an engagement ring and their wedding bands. But Katigbak has also noticed lately the growing popularity among Filipino couples of giving gifts to each other on the wedding day.

On top of the wedding bands, Bulgari has started offering a line of his-and-hers watches for this purpose. Such a tradition would require the couple to buy watches for each other. Alex Y. Vergara