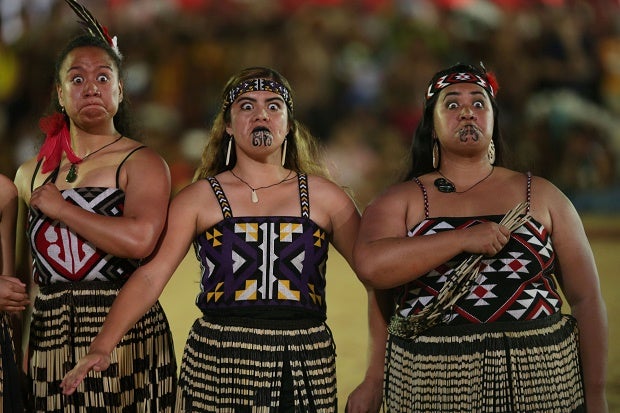 Maori from New Zealand take part in the parade of indigenous beauty at World Indigenous Games, in Palmas, Brazil, Saturday, Oct. 24, 2015. Rail-thin or thick-waisted, swathed in scarfs and ankle-length skirts or wearing only a thong bikini bottom and bodypaint, they incarnated the cannons of beauty of first peoples from across Brazil and as far afield as Panama and French Guyana. AP

PALMAS, Brazil — Adelma Simoes Madeira adjusted her feathered headdress and took a deep breath before stepping out onto the red carpet. After all, this foray into the spotlight wasn’t just about her. Madeira was representing her people.

A 16-year-old from the Terena people of central Brazil, with wide-set eyes and an even wider smile, Madeira was one of more than 60 women and girls taking part in the “parade of indigenous beauty” at the World Indigenous Games in Brazil.

Rail-thin or heavy, swathed in scarfs and ankle-length skirts or wearing only a thong bikini bottom and body paint, they incarnated the canons of beauty of first peoples from across Brazil and as far afield as Panama and French Guiana.

Some had serious swagger in their step, cocking their hips at the end of the catwalk and shooting a come-hither stare that would have made Gisele Bundchen proud. Others looked completely chagrined, almost flinching as the cameras flashed and iPhones snapped around them.

The Indigenous Games’ organizers stressed it wasn’t a beauty contest — no queen was crowned, no runners-up selected. It was rather a celebration of facial features, body types and adornments not often given their due, they said.

The fact that the event took place at all marked something of a watershed, said organizer Tainara da Silva, also of the Terena people from Brazil’s Mato Grosso do Sul state. A few years ago, such an event would have been unthinkable, she said.

“Before, the elders didn’t want to show their womenfolk in public,” said Silva, an agronomist who started organizing beauty contests on her home reservation a few years ago. “But that’s changing. They now see that this is a way of valorizing our culture and traditions.”

Although many Brazilians see theirs as a multicultural nation par excellence, the fruit of the mixing of blacks, whites and natives, indigenous people are largely absent from the country’s popular culture.

Blacks have made gains in recent years and now hold starring roles in the once white-dominated “telenovelas,” the prime-time soap operas that command the ratings in Brazil, but indigenous characters are still nearly non-existent. The same holds for major ad campaigns: not an indigenous person in sight.

This indigenous invisibility was what pushed Silva to champion the beauty exhibitions.

“Modeling agencies are totally uninterested in hiring an indigenous woman, but they have no problem in getting a white girl and dressing her up in traditional indigenous clothes,” Silva said. “That really bugged me, and I thought, ‘We need to show them that we are beautiful, too.'”

Silva also sees the events as an opportunity to educate the Brazilian public about the diversity of the country’s more than 300 indigenous groups, which are scattered across the width and breadth of this continent-sized nation — although their numbers have dwindled since pre-Columbian times and they now make up less than 0.5 percent of the population.

“Most times, people say, ‘Look, there’s an Indian,’ without even realizing how many indigenous groups there are,” Silva said. “I want to show the richness of our people, how each of us is different and special.”

The participants, too, seem to regard walking the catwalk as an almost messianic mission.

None of the participants in the events Silva has organized has gone on to score a modeling contract. But she hopes it’s just a matter of time.

“When I was a child, my dream was to become a model,” she said. “Since I wasn’t able to make that dream reality, I would love to see it happen for one of them.”