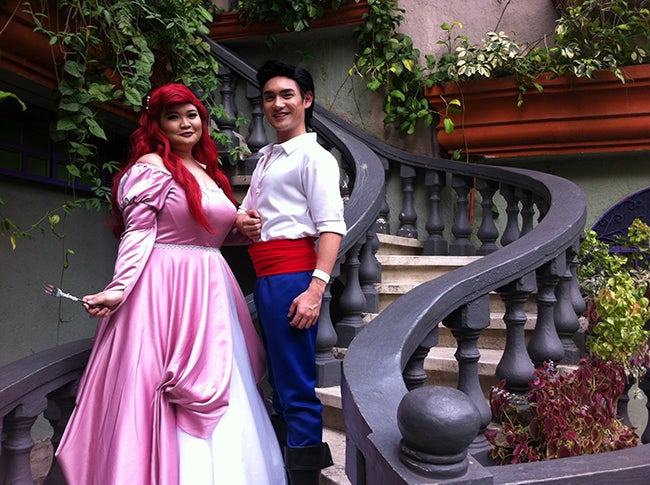 Have you ever started playing a new role-playing game, and you just happened to skip all the tutorials at the beginning?

The character you control would be cluelessly and aimlessly circling the place again and again, marveling at the setting and all the other characters that stand out from the crowd.

Being part of the cosplay event Fantasy Quest 4 last Oct. 25 felt exactly like that.

And for someone who came to her first cosplay convention—in boring, everyday clothes—I was only able to make sense of what was happening by talking to the familiar characters I could find.

Although cosplay started with strong Japanese influences in the country, the hobby’s enthusiasts are beginning to portray more characters from western “fandoms” nowadays.

That day, Chiqui Perez was Lothlórien’s elf queen Galadriel, a character from J.R.R. Tolkien’s Middle Earth. She was in a long, white flowy garment, and her gown was overlaid with silver mesh-like fabric, accented with a mother-of-pearl brooch. Her blonde curls were bounded by a silver-painted circlet tiara with a twig and floral design.

She has been cosplaying for the past 10 years, and claimed to be part of the first wave of cosplayers in the country. Now in her 30s, Perez said that most people her age are more into speculative fiction and serial fantasy productions like “Lord of the Rings,” “Game of Thrones” and “Dr. Who.”

“When you sort of grow older, you wanna graduate from the usual animé. It’s not about being mature with your character or entertainment choices, but you choose to become the characters that you enjoy watching,” Perez said.

The convention’s location, Fernwood Gardens in Quezon City, can easily transform from Middle Earth to any fictitious woods setting. It gives cosplayers the luxury of a secluded and spacious tropical landscape—perfect for shoots and acting out their roles.

As if transported right from the Enchanted Forest, Vinni Misa and Audrey Giger were seated on a carriage as “Once Upon A Time’s” unlikely couple of Robin Hood and Regina, the Evil Queen from Snow White.

Both decided to come as these two characters because of the liberty and vibe the location gives, and said that it helps them feel and become more of who they were trying to portray.

Giger said the series, which adds twists and conspiracies to well-loved fairytales and folklore, is considered one of the niche fandoms. She made and patterned her costume after “one of Regina’s lesser known gowns” that came in a backless, midnight blue mermaid-cut gown worn in the show’s first season.

Meanwhile, it was Misa’s first try at making his own costume. His version of Robin Hood maintained the dirty white, emerald green and leather layers. “I realized I can just make this a hobby instead of buying action figures. Instead of buying the character, might as well be one, because it almost costs the same,” he shared.

The garden was also curtained with hanging vine roots and had a koi pond with swans. When I saw a long-haired red head in a pink long-sleeved ballgown, I immediately imagined being in the blue lagoon, hearing Sebastian singing “Kiss the Girl.”

Rio Tanchuling and CJ Francisco were indeed dressed as Ariel and Prince Eric from Disney’s “The Little Mermaid.” After debating between the movie or Broadway costume designs, the two decided to go for the wardrobe of the childhood favorite.

‘We are your childhood!’

“We figured the cartoon one would be more fun, noticeable and recognizable,” Francisco said, while Tanchuling added, “It’s like screaming ‘We are your childhood!’” as she combed her hair with a dinglehopper (fork).

But the impeccable details of their entire outfits—like the impossible, unrealistic wave of Ariel’s bangs, for example—are to be credited to their eye for costume design. The two were actually part of the Ateneo Blue Repertory, and were considered the theater group’s gurus in hair and makeup, costumes and set designs.

Wouldn’t it be delightful, especially for young students, to see teachers they look up to in costumes of their favorite characters, or perhaps characters they never met yet? Imelda Caravaca-Ferrer and Marnelli Bautista, educators and supervisors of the Department of Education (DepEd), think that cosplaying is an underrated storytelling device for children.

“It’s the other side of making stories come alive that you could share with students. When they see that we are having fun with cosplaying and literature ourselves, iba ’yung impact nun sa bata,” Bautista said.

Ferrer was also the one who suggested that DepEd could use cosplaying to enhance their upcoming activities during National Reading Month this November.

The two were admittedly the oldest in the Fantasy Quest crowd, but Ferrer said, “I think we’re having the most fun. We’re the lolas. Kung sexy lang ako, jusko, nag-‘Hunger Games’ na ako!”