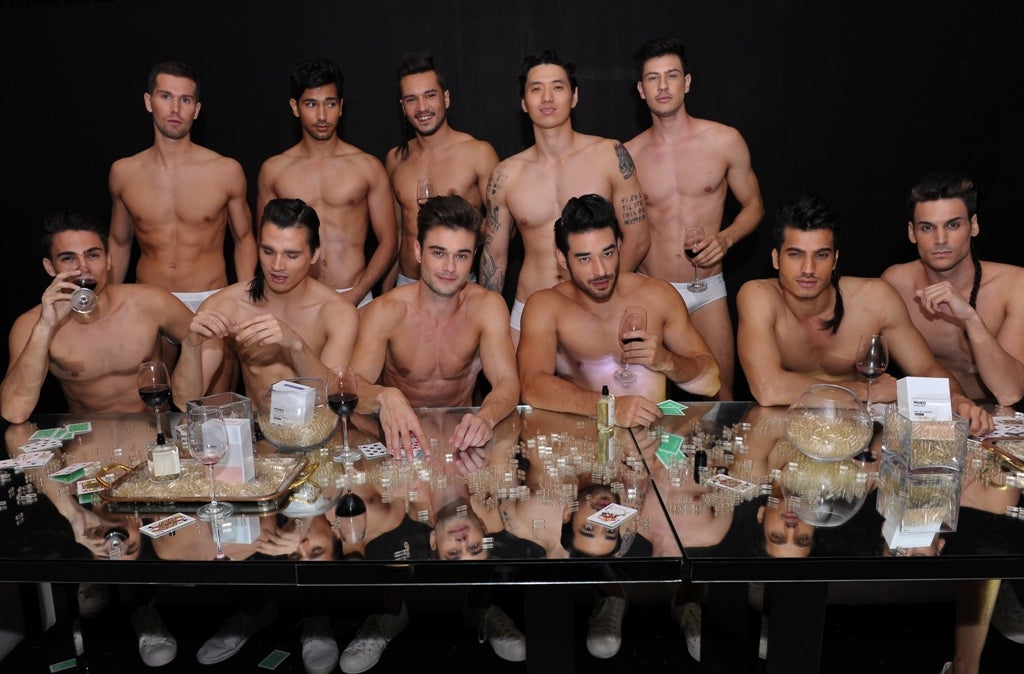 Red Charity Gala 2015 was definitely a night of glitzy fashion and oozing sexiness. Both organizers wore stunning gowns designed by this year’s featured designer, Lesley Mobo, no less, dahlings. We are referring to bubbly

The night kicked off with the women-guests with their hubbies entering the ballroom of the Makati Shangri-La and finding there sizzling hot men, wearing nothing but Bench underwear, having their snacks, natch!

It turned out that Bench, the featured label that night, was also launching its new scent, “Lesley Mobo.”

Suddenly, with a burst of dramatic lighting, the runway show opened.

With the male models in underwear standing on the sides of the weird ramp, the tall female models did justice to Mobo’s colorful creations.

In the finale, Mobo got a standing ovation. Bravo, palangga!

Mobo hails from Aklan. Studying in London, he received the Colin Barnes Award for fashion illustration at the Central Saint Martins.

He was featured in the “Fashion in Motion” exhibition at the Victoria and Albert Museum.

Lesley Mobo has designed for Diesel and Uniqlo.

Before the show, guests had to inch their way to their designated tables, since the ballroom was very dark.

I noticed a couple of society women almost falling on their faces. It was like the blind leading the blind, palangga.

The stage had so many cords and steps that even our palangga, Virgie Ramos, had to be helped by one of the guests to claim her prize on stage.

Tessa and co-emcee Tim Yap had their backs glued to the front of the Bench table.

Others were just within reach of the short ramp, while the rest had only the backs of both emcees facing them.

Even during the charity auction, the emcees couldn’t see all the tables behind them.

If guests wanted to bid, their friends would shout to Tim and Tessa that there were bidders at the back.

A highlight was the absolutely divine, to-die-for seared sea bass, mussels, prawn and barley with clam saffron tomato broth soup that was served in jars that kept it warm for hours.

It was the winner of the four-course dinner, dahlings.

The table that had guests talking was that of Fila CEO and president Cris Albert, who had the waiter tie small red ribbons around the champagne flute glasses for her guests. Guess why. My lips are sealed.

“It is amazing how this idea that we have envisioned several years ago is still burning,” said Tessa about Red Charity Gala. “We are very happy to partner with creative and world-class talents, feature their works, and give back to the community all at the same time.”

One high-society lady was in a daze over the gorgeous male models in their briefs.

“I have never seen a bunch of half-naked men together in a long, long time,” she said. “Not only that, they are all also handsome. They sure were not around in my time. What a pity!”

The Red Charity Gala 2014 was directed by Ariel Lozada. Styling was by Noel Manapat, hair and makeup by Henri Calayag.