Knock, enter, but will you survive 'Bahay Trese'? | Inquirer Lifestyle 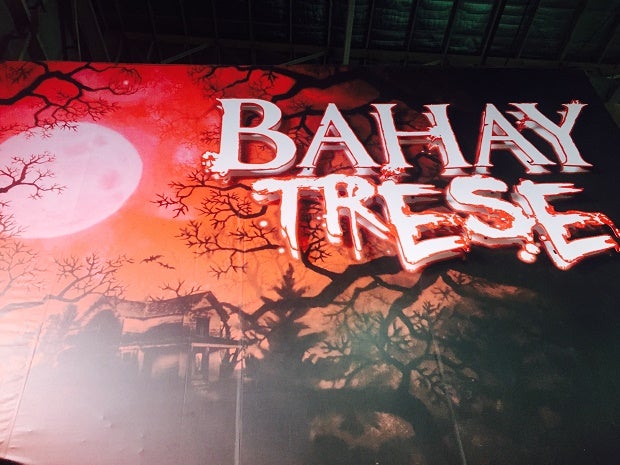 Not for the faint of heart, Bahay Trese sets itself apart from the typical horror house with its history-based plot and real stage actors. PHOTO BY YUJI VINCENT GONZALES/INQUIRER.NET

Knock, enter, but will you survive ‘Bahay Trese’?

What really happened during the infamous yet shady Friday the 13th of February 1945?

During the Japanese occupation of Manila, murders and other crimes of atrocities committed by the invaders against Filipino natives were supposedly documented for every single day of February 1945, except the 13th. The killings reportedly picked up on the 14th until the 24th.

This historical parcel was the inspiration of the Philippine Educational Theater Association (Peta) and World of Fun in coming up with a new horror attraction, the “Bahay Trese.”

Situated at the 4th level of Sta. Lucia East Mall in Cainta, Bahay Trese, a haunted house with address number 13, is believed to be the “playground of unappeased spirits” from the massacres of Manila. It was said to be the former home of the family of Dr. Teddy del Mundo, whose mother was driven insane by restless spirits, and who turned mad himself after a failed attempt to save his own daughter from a terminal disease.

Peta artistic director Maribel Legarda, who led the conceptualization and direction of the project, said they wanted to produce something different from traditional horror houses by incorporating a history-based story, hiring real stage actors, and engaging the audience in the actual experience.

“We wanted a new approach to creating this type of entertainment. We wanted to develop a horror house but with a story or what we call nowadays as ‘immersive theater,’ which is medyo in ngayon which is trendy). We wanted to develop a story that’s obviously Pinoy. Tapos in the process sabi ko (Then, in the process, I said), why not set it in the Japanese retreat of Manila, kasi grabe ‘yung naging killing noon (because the killings then were extreme) and it’s really quite famous in our history,” Legarda said in a press briefing.

“Ang ‘what if’ natin, what if kaya nga itong bahay na ito (Bahay Trese) ay minumulto, kasi nga may undocumented deaths dito during the Japanese occupation. So it became the core of the story, ‘yung context niya… And then we tried to develop a simple story out of it,” she added.

(Our ‘what if’ is, what if this house is haunted because of the undocumented deaths here during the Japanese occupation. So it became the core of the story, it’s context…)

Before entering Bahay Trese, patrons are warned of intense audio and lighting, extremely low visibility, strobe lights, special effects, sudden actions and the overall physically demanding environment inside. Those with heart conditions and other diseases such as hypertension and asthma, pregnant women, and children below 13 years old are prohibited from entering the attraction.

Echoing Legarda, Peta senior production manager Eko Baquial told INQUIRER.net that what sets Bahay Trese apart from other horror attractions is its plot, as well as the theatrically trained performers who carry it out.

“What makes this different from other horror houses that are now in the market is meron siyang kwentong sinusundan (that it follows a particular plot). It’s not just the usual. This meron kang sinusundan na kwento (With this, you have a story to follow), and I think that’s also one of the things that sets this apart from other horror houses,” Baquial said, noting that their community- and university-based actors underwent several training sessions, including mask-making and make-up workshops.

(The base of their training is how to make this experience different. What do they need to do to grab the people’s attention.)

The adventure starts with a screening of a documentary about the Del Mundo family and their haunted residence before the guests are ushered by a caretaker named Mang Abe through different rooms of the house, including a foyer, an altar room, a mad man’s laboratory, and a little girl’s bedroom.

The journey ends with a challenge to escape for those who dared to knock and enter.

But for patrons who can’t take all the scare in the middle of the experience, Del Mundo said Bahay Trese was built with “duwag” (coward) exits.

“The horror house was designed to have ‘duwag’ exits’ para kung meron talagang hindi na kinakaya. And everything is monitored naman, so people are watching the [those] inside. So if we think na hindi na nila kaya, then someone will [get] them out,” he said.

(The horror house was designed to have “duwag” exits for those who cannot take it. And evertyhing is monitored so people are watching those inside. So if you think that they can no longer take it, then someone will get them out.)

World of Fun marketing director Francis Santos said the biggest challenge for the entertainment center was to make Bahay Trese stand out from usual horror booths, noting that they do not want it to become a mere walkthrough experience.

(We wanted to develop a new product that is not merely a walkthough attraction; here, you are immersed. If we would develop a horror house which is just a simple horror house, then it would be no different from a traditional horror house. The challenge is how to make it stand out, how will it be unique and why it should be patronized.)

Peta’s Legarda said what makes Bahay Trese more interesting than mechanically operated attractions is the level of intensity of acting that performers have to maintain throughout a day’s work.

“I really want to commend my actors kasi hindi biro [‘yung ginagawa nila]. Kahit maikli ‘yun… one minute na paulit-ulit nilang gagawin, sobrang intensity kasi nga they really have to come up close to the [patrons]. I was telling them nga na if the audience doesn’t believe you, that’s it—the scene is dead. Kasi wala naman kaming uber special na special effects. So it’s really the strength of that one minute of performance is what counts—looking [at] the audience that really gets them engaged,” she said.

(I really want to commend my actors because what they do is no joke. Even if the act is short…they have to do it repeatedly in one minute, it is so intense because they have to come up close to the patrons. I was telling them that if the audience doesn’t believe you, that’s it—the scene is dead. It’s because we don’t have uber special effects. So it’s really the strength of that one minute of performance is what counts—looking [at] the audience that really gets them engaged.)

Thrills and chills: Fun and scary things to do with your friends this Halloween weekend

Staying in this Halloween? You can still scare yourself silly