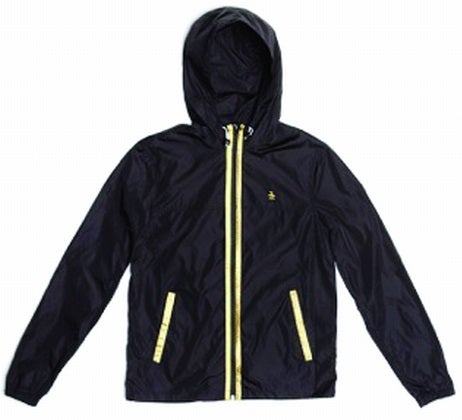 “CONTEMPORIZED” hoodie to appeal to the young

Original Penguin by Munsingwear marks its 60th anniversary with a special collection of knitted polos, woven shirts, tees and outerwear in dramatic fall colors like plum, charcoal gray and deep navy, and embroidered with the brand’s iconic Pete the Penguin logo in gold thread.

“We’ve never had a Penguin shirt or polo with a gold emblem until now,” said brand manager Justin Pua. “That’s what makes this limited-edition collection quite special.”

Cheryl Lao, GM of Anthem Group, brought the brand to the Philippines six years ago soon after it was revived from retail hibernation by Perry Ellis.

For a time, there were no Penguin items in the market as Munsingwear, the Minneapolis-based manufacturing company behind the brand, closed shop in 1991 after nearly 70 years in operation. It stopped producing the Penguin line much earlier.

Instead of diminishing the brand’s status, Penguin gained a cult following among teenagers and young adults who fondly remembered it as their “Daddy’s shirt.” Suddenly, Penguin shirts became cool again.

While sales of vintage Penguin shirts on eBay and vintage shops thrived, a Canadian company spotted the potential business and promptly bought the brand.

After a bumpy start, which included the Canadian company filing for bankruptcy, Penguin ended up under Perry Ellis’ wing, which promptly expanded and “contemporized” the brand without completely chucking its rich heritage.

In fact, designers at Perry Ellis in New York paid homage to Penguin’s “daddy image” by coming up with a “Daddy-O” line of pseudo inherited polos with a “hand-me-down” vibe that underscores the brand’s timelessness, quality and durability.

“When we first launched the brand locally, a number of more mature clients kept asking us if this was the same as Munsingwear,” said Lao. “They were quite right, except that the brand they grew up with had evolved into something bigger and better through the years.”

And Lao’s decision to reintroduce Penguin to Filipinos paid off. The addition of a limited line of women’s polos and tops further expanded its market.

It has also affirmed one common observation. Despite the entry of so many brands and clothing options in the Philippines, most Filipinos have remained brand-conscious.

“Filipinos appreciate comfort and quality, but I think their main decision to buy is still very much dictated by the logo,” said Lao. “We also carry, for instance, nice woven shirts with the penguin logo placed in obscure locations like the cuff. For some reason, they’re not selling as well as our polos.”

From a handful of stores in 2009, Original Penguin by Munsingwear now has 24 stand-alone stores all over the Philippines including branches in Cebu, Davao and Cagayan de Oro. Its flagship store is located at Bonifacio High Street in Taguig.