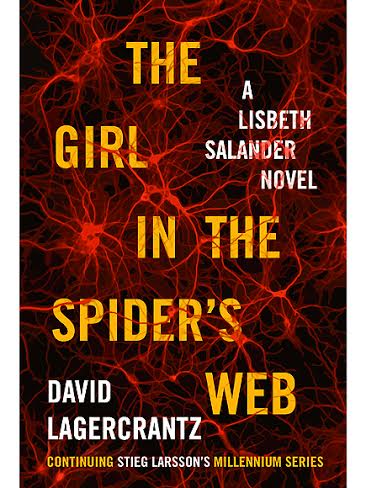 THE COVER for "The Girl in the Spider's Web"

SOMETIMES the story behind a book is almost as fascinating as the book itself. This was the case with 2008’s “The Girl with the Dragon Tattoo,” an edgy, dense thriller from Sweden starring the pincushion hacker Lisbeth Salander and the dashing, crusading journalist Mikael Blomkvist.

“Dragon Tattoo,” along with its sequels, 2009’s “The Girl Who Played with Fire” and 2010’s “The Girl Who Kicked The Hornet’s Nest,” became worldwide sensations, leading to a Swedish film series of all three books as well as a Hollywood adaptation starring Daniel Craig and Rooney Mara.

The tragic, ironic story behind the Millennium Trilogy—as the books were called—has to do with the author, Swedish journalist Stieg Larsson. Not only did Larsson have many similarities with his male protagonist Blomkvist, but he died in 2004, before any of the books were published and certainly long before they made Larsson a global publishing phenomenon.

More than Blomkvist, it was the enigmatic Salander, with her hacking skills, punk piercings and antisocial outsider attitude, who won over readers. After “Hornet’s Nest” came out, readers were faced with the possibility that there would never be another book featuring Salander.

But now we get “The Girl in the Spider’s Web: A Lisbeth Salander Novel” by David Lagercrantz, translated by George Goulding (Alfred A. Knopf, New York, 2015, 400 pages), the fourth book that turned the Millennium Trilogy into the Millennium Series.

Lagercrantz is, like Larsson and Blomkvist, a Swedish journalist. His selection is controversial, as he was chosen by Larsson’s father and brother. The two had emerged victorious in a battle over Larsson’s estate with Larsson’s longtime partner Eva Gabrielsson; she criticized the publication of “Spider’s Web.”

Continuing a deceased author’s beloved series is both a serious challenge and a long-standing publishing tradition, which is why you can still read new adventures of Jason Bourne and James Bond long after the deaths of Robert Ludlum and Ian Fleming.

Lagercrantz approaches “Spider’s Web” years after the events of “Hornet’s Nest,” with Blomkvist down on his journalistic luck and Salander spending her spare time hacking the National Security Agency—yes, that NSA.

Their paths inevitably cross when a prominent scientist is killed, leaving Salander somehow in the role of protector of the scientist’s autistic son August Balder, who has prodigious mathematical abilities. With dangerous criminals after August, Salander goes on the run while Blomkvist tries to figure out what’s really going on.

Aside from updating the tech edge, Lagercrantz has a somewhat lighter touch compared to the dense prose that Larsson favored. But “Spider’s Web” employs a lot of exposition, while playing up the cyberpunk aspects of the series. The plot is intriguing and solid for a thriller, with things just getting a bit loose toward the end.

Readers familiar with Larsson’s books will find much to like here as Lagercrantz clearly colored between the lines that Larsson put down for Salander and Blomkvist. One of the weaknesses of “Spider’s Web” is that it actually doesn’t have enough Salander and too much Blomkvist.

Perhaps the book’s greatest flaw is how safe it is. Lagercrantz was not going to do extremely radical things to such a valuable property. Salander may not be bulletproof, but she and Blomkvist are essentially immortal because readers want to see them doing the things they do.

“Spider’s Web” also feels like Lagercrantz is setting the stage for a further continuation of Salander and Blomkvist’s high jinks with its reference to a possible worthy antagonist to Salander, one she has ties to. True enough, it has been announced that Lagercrantz is writing two more Millennium books in what amounts to a second Salander trilogy.

Consider David Lagercrantz’s “The Girl in the Spider’s Web” to be the competent, overly faithful progression of the Girl with the Dragon Tattoo’s life in a world without creator Stieg Larsson.