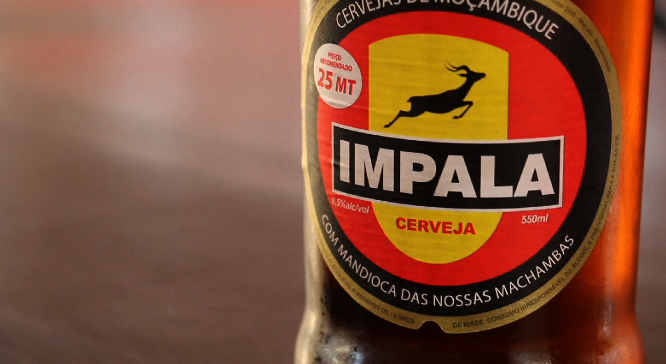 MAPUTO — In Mozambique’s bars and street stalls, the tipple of choice nowadays is a cold “Impala” — a beer made from cassava rather than barley that is fast capturing a valuable slice of the African market.

Cassava, also known as manioc or yuca, is a root vegetable grown across sub-Saharan Africa as a staple crop, and has long been used to make home-brewed beer.

But in 2011 Impala became the world’s first commercially made cassava beer when it was launched by SABMiller through local subsidiary Cervejas de Mocambique (CDM).

“As long as it is ice cold, it is better,” Dercio Machava told AFP at a backstreet stall on the outskirts of the capital Maputo, adding that its alcohol content of 6.5 percent was “a bit higher than other beers”.

“My customers say it is good. Some days, it is the beer I sell the most,” said stall-owner Dona Cecilia.

Described by its maker as a pale lager with a “rich body and taste”, the beer started as an experiment to find a locally brewed product that avoided the need to import expensive barley malt.

Impala has now sold 100 million bottles since its launch — one small attraction for Anheuser-Busch InBev, which is set to buy SABMiller in one of the biggest takeovers in corporate history.

“It is already the third most drank beer in Mozambique,” said Pedro Cruz, director of CDM, at its state-of-the-art brewery in Maputo, which boasts a chic tasting bar.

“It has been a revolution for farmers as it gave commercial value to a plant used only for food before,” Cruz said.

“Impala enables more people to access a beer that is quality controlled, and to abandon the homemade beers that can be harmful to health.”

The health argument is a serious issue across Africa where badly made homebrews cause regular fatalities.

In January, 75 people were killed by toxic beer served at a funeral in Chitima, a town in western Mozambique.

All of the cassava used in the brewing process for Impala is sourced from 7,500 smallholder farmers in central and northern Mozambique.

The cassava is processed directly in the fields by Dutch subcontractor Dadtco, which operates a mobile factory that fits in a standard container — but even the hardy cassava needs to be treated in a specific way.

“It rots almost immediately after harvest so it must be processed very quickly. This is what has complicated its commercialization until now,” Dadtco director Hubert van Melick said at Ribaue, 2,000 kilometers (1,250 miles) north of Maputo.

Behind him, workers threw the tubers into crushers that make “cassava cake”, which is then packaged into bags easy to transport over long distances.

“We want them to raise the price to at least 5,000 meticais per ton, because we don’t make any profit,” said Fernando Ayron, 25, whose field is next to the mobile processing unit.

Van Melick countered by saying that the project is still in its early days and farmers need to grow more cassava.

“The problem is not the price, it is the volumes that need to increase. And with larger volumes, they will start making money,” he said.

Benefiting from lower production costs and lower taxes, Impala is cheaper than its commercial counterparts, selling for about 25 meticais (60 US cents) against 35 meticais.

But home-made beer costs only about 10 meticais — presenting a big challenge for big brewers as they try to persuade more customers to choose factory-made brands.

Africa as a whole is seen by global beer companies as a huge potential market, predicted to grow five percent a year between 2013 and 2017.

Rival brewing giant Diageo started making its own cassava beer in Ghana in 2012, called “Ruut Extra”, which has an alcohol content of six percent.

AB InBev hopes that SABMiller’s deep roots in Africa and pioneering use of ingredients such as cassava will help it to exploit future demand among the new generation of African consumers.

Cruz, the manager who oversees the Mozambique operations, has plans to double Impala production and the number of farmers involved by 2018.

But he warned that such ambitions would be thwarted if the current tax of 10 percent on cassava beer, compared with 40 percent for malt beers, was altered.

“We need for the government to not meddle with the tax cuts that allow Impala to be cheaper,” he said.