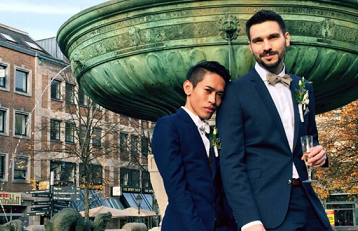 After being bullied by bashers online early this year, gay couple Naparuj Mond Kaendi and his German boyfriend Thorsten Mid have tied the knot last October 30 in Germany.

Kaendi posted some of the wedding pictures on his social media accounts.

Netizens wished happiness for the newly married couple by commenting on Kaendi’s photos on his Facebook and Instagram accounts.

Kaendi is a former creative director of a Thai modeling agency. Meanwhile, Mid was one of the agency’s models.

They have been together for two years before they got married.

Kaendi and Mid became the target of online hate after their photo, which showed them holding hands while on a train in Bangkok, went viral on social media last April.

Netizens then picked on Kaendi’s physical appearance, while some even said that Mid found a “pet” in the Thai creative director.

Kaendi met the harsh remarks with kindness as he thanked everyone who defended them from bashers.

“#THANKYOU all of you for the support and all the positivity. To be honest I wasn’t so surprised when random people walked to us last night and showed us all these candid pictures of us that have been posted the whole evening. It happened before, same time last year and all the nasty comments left me nothing but worries and tears. This year though, in the other hand, Thorsten and I, unexpectedly, are so thankful and overwhelmed by the storm of your huge support. We never meant to try to be under the spotlight and all… But thank y’all anyway,” he said on a post last April 18. AJH/RAM