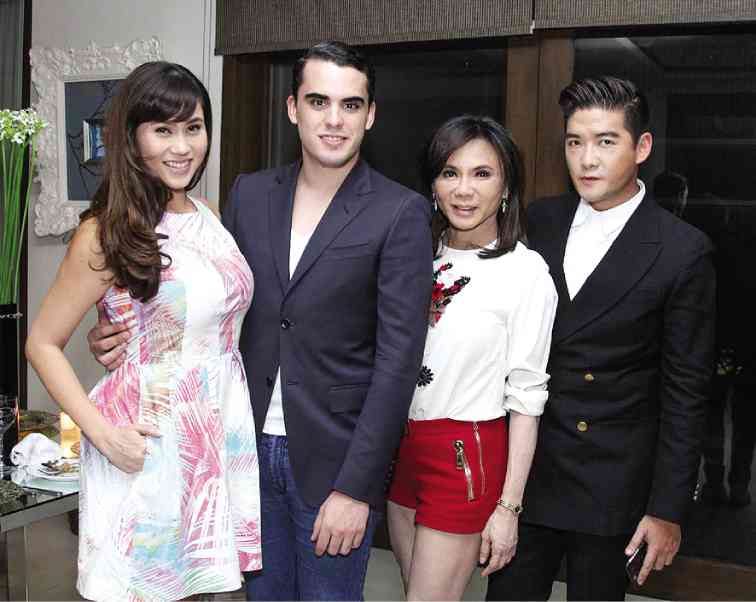 JAVI Martinez Pardo quit a stable job in Madrid and moved to Manille, where he’s now doing good as creative director of an events production company.

One of his projects, the Belo Polo Cup which kicked off the yearlong celebration of the Belo Medical Group’s 25th anniversary, endeared Javi to Dr. Vicki Belo and her daughter Cristalle Belo Henares.

The Belo family recently hosted a fabulous party to celebrate Javi’s birthday, in the company of 20 of his closest pals.

Held at Vicki’s residence, the event had a lush floral arrangement courtesy of Robert Blancaflor.

The delish menu, dahlings, included sopa de ajo, Japanese salad, croquetas, gambas Madrilène, Wagyu paella and cochinillo, with mouthwatering dessert that only a chocolate lover like Vicki could have chosen.

Somebody teased Javi, “Well, how does it feel to be 30—the second time?”

Artist Space is very fortunate to have the talented and versatile artist Mariko Jacinto as she exhibits a set of paintings in a solo show titled “Tibet on My Mind.”

The exhibit reveals Mariko’s deep empathy for Tibet, where political strife between its natives and the Chinese government has endangered the continuity and sanctity of age-old Buddhist practices.

A Buddhist herself, Jacinto was overwhelmed by the plight of the Tibetan monks who claim religious persecution and destruction of their natural environment by the Chinese government.

“I just feel the need to express the hopelessness by painting what might soon be gone,” she said. “The Chinese government built the Friendship Highway which runs from Shanghai all the way to Lhasa, the Tibetan capital. They bore tunnels and roads into and around the majestic mountains which the Tibetans treasure, as they see these mountains as gifts of nature.”

She added: “While every Tibetan family wants its son to be a monk, the Chinese government controlled this religious tradition. The exhibit is not just a probe on the human condition and natural phenomena of Tibet, but a statement and a warning of things to come in light of the controversial territorial disputes between Tibet and its oppressor.”

Deeply affected but not intimidated, the artist depicts the turmoil in Tibet with bold strokes and thick impastos of oil on canvas. Each painting uniquely and clearly evokes particular emotions that the artist felt for the Tibetan people—fear, isolation, and a yearning for serenity expressed through a style reminiscent of the artists that influenced Mariko’s work, from Van Gogh’s Expressionism, John Singer Sargent’s shadowy metaphors, to R.B. Kitaj’s wit.