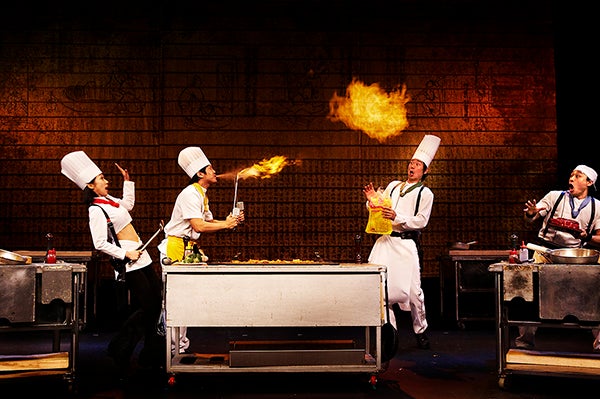 A cooking show with rhythm and fun–but no food

Are we going to cook bibimbap?,” I asked our Korean guide as she led us into a theater in Myeongdong.

It was 2009, and I was in Seoul for the first time for a media tour which included watching the “Cookin’ Nanta Show”—and I thought it was a cooking demo.

“No, it’s like a musical, but there are no words. Many people like it,” assured our very energetic guide Joey, as she handed us our tickets and ushered us into the theater. The doorway was a frame of pots and pans, colanders and skimmers, with the “Nanta” sign in steel block letters perched on top.

After a long summer day of touring Seoul, sitting in an air-conditioned theater was a welcome break—never mind the bibimbap. It was a weekday afternoon and there was a good number of people, mostly tourists like us.

The show started with a video introduction in Korean with loosely translated English subtitles, and all I could make out of it was: There’s going to be a wedding and the unprepared cooks had to come up with a banquet with only an hour to prepare.

Enter the cooks: a hot girl in a cropped chef’s jacket that bared her midriff, and two cute guys who looked like they just stepped out of a Koreanovela—enough reasons for me to smile throughout the show. I wondered which BB cream they were using.

Oh, maybe it’s like “Hell’s Kitchen,” I thought. Maybe a Korean Gordon Ramsay will terrorize the cooks until they come up with good food and beat the deadline.

Well, the next character wasn’t an evil chef, but a power-tripping manager. Accompanying him was his goofy nephew who was learning how to cook. We followed the manager as he barked orders to the frazzled cooks who chopped, tapped and stomped their way to cooking a wedding feast.

“Cookin’ Nanta” is a nonverbal comedy which uses common kitchen items as musical instruments—chopping boards, knives, even a trash bin—and makes loud music out of them.

There were some circus acts such as balancing plates, passing around plates, and for a while I thought they’d throw plates at us to catch.

Luckily, they didn’t, but they asked for audience participation. They asked us to join in the chanting, and to our surprise, the bride and groom were volunteers from the crowd—and they had to eat the food that the cooks served!

While there wasn’t actual cooking involved, there was a real fire; fresh produce flew around as the cooks rhythmically chopped them into tiny pieces as they danced. It was a kitchen fiesta!

At the end of the show, they scooped out small, colorful plastic balls from a large bin using giant strainers, and threw the balls at the audience.

It was a shower of balls, and I took some of those home as souvenirs since taking photos or videos was not allowed.

But since it’s an hour-and-a-half-long show with no dialogue, some people might find it dragging (those with low attention span and those irked by the sound of clashing metal), but “Cookin’ Nanta” turned out to be a memorable highlight of my first trip to South Korea.

That was a good six years ago, so when I heard that “Cookin’ Nanta” was going to be staged by Concertus Manila in Solaire this November, I was pretty excited. It will be the same show, but I’m sure it will be as fun, and this time, I’ll make sure to have my bibimbap fix before watching.