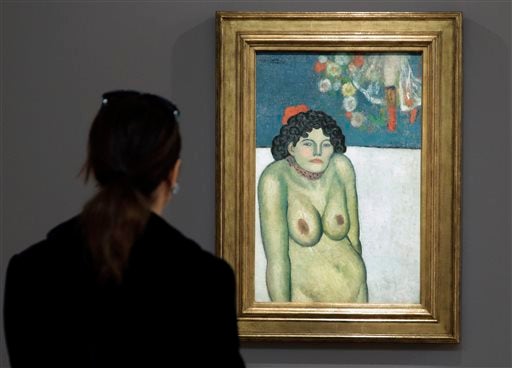 This file photo shows "The Nightclub Singer, a 1901 painting by Picasso from his Blue Period, at Sotheby's in New York. The work features a second picture on the reverse side depicting Picasso's art dealer, Pere Manach. The piece is estimated to fetch $60 million on Thursday night, Nov. 5, 2015 at Sotheby's fall art auction. AP FILE PHOTO

NEW YORK— A nude portrait by Pablo Picasso brought in over $67 million at Sotheby’s on Thursday, a day after the auction house sold $377 million worth art from the estate of its late former owner.

The auction house estimated the total value of the Taubman collection at $500 million.

On Thursday evening, Sotheby’s offered impressionist and modern artworks from other collections including the van Gogh. The highlights of the evening sale were:

“The Nightclub Singer,” by Pablo Picasso.

Notable: The 1901 nude portrait painted in oil is from Picasso’s Blue Period. It has the added allure of having a second picture on the reverse side, a discovery made during a 2000 conservation. It depicts a bawdy picture of Picasso’s dealer, Pere Manach, and includes an inscription indicating it was intended as a gift to him. The seller was billionaire businessman William Koch, a 1992 America’s Cup winner and brother of conservative political donors Charles and David Koch.

“Landscape Under a Stormy Sky,” by Vincent van Gogh.

Notable: The current van Gogh auction record is $82.5 million. The painting depicts a meadow under threat of a storm and was created in 1889 two months before van Gogh painted his most celebrated work, “The Starry Night,” and a year before his death.

Notable: The 1920-1922 painting was given to the artist’s heirs after residing in the Stedelijk Museum in Amsterdam for 50 years.

Notable: Monet’s beloved garden in Giverny, France, is the inspiration for the 1908 oil on canvas, a subject he painted often. The work also was owned by Koch.