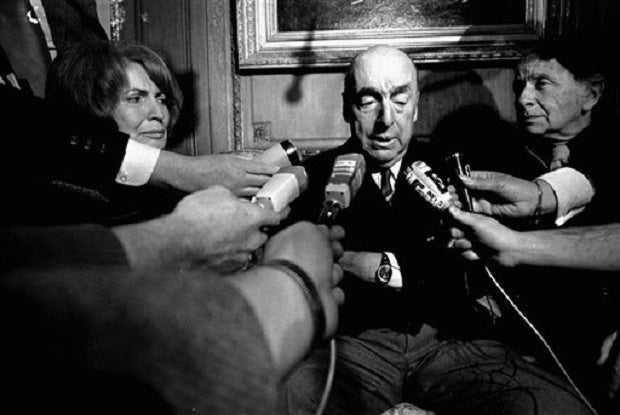 This Oct. 21, 1971 file photo shows Pablo Neruda, poet and then Chilean ambassador to France, talking with reporters in Paris after being named the 1971 Nobel Prize for Literature. Forensic experts say no traces of chemical agents have been found in Neruda's bone remains. Chile's Communist Party asked to exhume his remains following allegations he may have been poisoned. Officially, Neruda died of cancer only days after the 1973 coup toppled his close friend, President Salvador Allende. His body was exhumed in April 2013. (AP FILE PHOTO

SANTIAGO, Chile — Chile’s government is acknowledging that Nobel-prize winning poet Pablo Neruda might have been killed after the 1973 coup that brought Gen. Augusto Pinochet to power.

The Interior Ministry released a statement Thursday amid press reports that Neruda might not have died of cancer. The statement acknowledged a ministry document dated March of this year, which was published by the newspaper El Pais in Spain.

“It’s clearly possible and highly probable that a third party” was responsible for Neruda’s death, the document said.

However, the ministry cautioned that a panel of experts investigating the highly disputed topic had not reached a conclusion.

Neruda was best known for his love poems. But he was also a leftist politician and diplomat and close friend of Marxist President Salvador Allende, who committed suicide rather than surrender to troops during the Sept. 11, 1973, coup led by Pinochet.

Neruda, who was 69 and had prostate cancer, was traumatized by the coup and the persecution and killing of his friends. He planned to go into exile, where he would have been an influential voice against the dictatorship.

But a day before his planned departure, he was taken by ambulance to the Santa Maria clinic in Santiago, where he had been treated for cancer and other ailments. Officially, Neruda died there on Sept. 23 from natural causes. But suspicions that the dictatorship had a hand in the death have lingered long after Chile returned to democracy in 1990.

Neruda’s death was so controversial that in 2013 his body was exhumed for examination.

Tests showed no signs he was poisoned, but his family and driver were not satisfied and requested further investigation. The judge investigating the case has asked for testing for substances that were not looked for in the first round of tests.

Chile’s Neruda bone remains to be analyzed in US