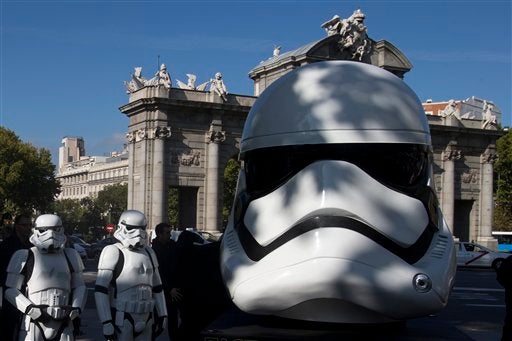 Star Wars Storm Trooper characters stand in front of the Puerta de Alcala monument, by a giant Star Wars helmet that was unveiled during the inauguration of an open air exhibition called 'Face the Force' in Madrid, Spain, Friday, Oct. 30, 2015. Seven other giant helmets are due to be placed in various corners in the city. AP Photo

LOS ANGELES–Macaroni and cheese in the shape of Darth Vader, Yoda and R2-D2? Check. Action figures? Check. A Jedi robe for your dog? You can have that too.

Disney is pulling out all the stops ahead of the hotly-anticipated release of the next film in the blockbuster “Star Wars” series, with a massive merchandising blitz expected to reap billions of dollars.

The push to drive up excitement for the film began in earnest in September — more than three months before “Star Wars: Episode VII – The Force Awakens” hits screens worldwide in mid-December.

Disney tapped into the growing toy unboxing phenomenon during its “Force Friday” event, and the hype has been mounting ever since, with ecstatic fans snapping up advance tickets and products related to the film’s beloved characters.

“They have done a remarkable and effective job in getting people into such a state of anticipation,” said Tom Nunan, a film producer and lecturer at the UCLA School of Theater, Film and Television.

“And Disney knows that many of the items they are selling will never be opened and will be kept like an artifact or jewel that someone might sell some day.”

Experts predict that products tied to the film could bring in up to $5 billion in revenue for Walt Disney Company, which paid $4 billion for ‘Star Wars’ creator George Lucas’s Lucasfilm in 2012.

Many stores that have stocked up on “Star Wars” merchandise say the products are selling quickly, with interest expected to peak on the eve of the film’s release in US theaters on December 18 and during the holiday gift-giving season.

“We have two aisles of Star Wars merchandise in the store, which is pretty crazy,” said Jenn Scott, a sales rep at Meltdown Comics and Collectibles in Los Angeles.

“A lot of the people who are buying stuff are totally adults,” she added, pointing to the displays of action figures, baseball cards, puzzles and comics.

“We got the Funko Pop figures for the new movie as soon as they came out and we sold out immediately.”

At the entrance of the store also sits a life-size figure of Yoda, the iconic Jedi master, which is selling for $900.

Several store customers said they had already purchased tickets for the movie and were mulling which collectibles to buy.

“We have watched all six Star Wars movies and we are going to see the latest one at 9:30 on the morning of December 19,” said Adam Duncan, 30, as he and his pregnant wife Jennyfer debated which action figures to purchase.

They ended up buying two — Captain Phasma and Chewbacca.

“She’ll definitely also watch all the movies — she has to,” added Adam, pointing to his wife’s belly.

Even pets are getting in on the craze, with owners decking their pooches and cats in “Star Wars” outfits, headbands and hoodies.

“The Chewbacca costumes, the Yoda costumes, the Darth Vader costumes — these are flying off the shelves right now,” said Ebony Patton, manager at a Petco store in Los Angeles.

The chain retailer Target said it had stocked up on 600 “Star Wars” products ranging from toys and apparel to groceries and housewares in anticipation of the holiday season.

“Star Wars was huge for us earlier this year,” said Lee Henderson, a spokesman for the company. “And we expect another uptick in sales when the movie is released.”

He said one of the most popular items was the BB-8 droid — new in the latest film — which is expected to be high on Christmas lists.

Experts said one added advantage for Disney was the fact that the series appeals to fans of all ages.

“Star Wars comes with a strong baseline,” said Steve Pasierb, CEO of the US Toy Industry Association, a trade organization.

“This is a multi-generational product, so it appeals to dads and sons, mothers and daughters, families, grandparents and grandkids.”

He said Disney had done a superb job at using this loyal fan base to orchestrate its “Star Wars” campaign and to roll out products linked to the film at a steady pace.

“They have done it in a way that hasn’t annoyed the public,” said Pasierb.

“Normally when there is a marketing blitz like that, the public will wear out,” he explained.

“But the public has not pushed back and they have been able to do it with just the right level to peak people’s interest and keep it there.”