This Asian ‘Lear’ gets caught in no man’s land | Lifestyle.INQ ❮ ❯ 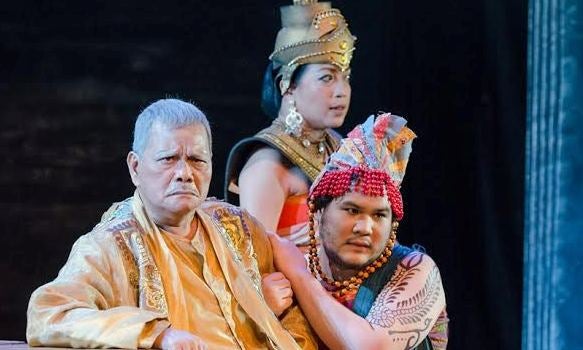 This Asian ‘Lear’ gets caught in no man’s land

From “Romeo and Juliet” to “King Lear”: Dulaang UP’s second offering in its 40th season is another Shakespearean tragedy. Tony Mabesa, founder and for a quarter of a century the company’s artistic director, takes the helm.

This adaptation’s concept: Move the story from a hazy, ancient Britain to a mythical Southeast Asian kingdom a few centuries back. One result of this move: great pageantry. The costumes, designed by Eric Pineda, are lush and bright, rich in color and texture. The performers glide about the stage in shimmery sarongs and sashes, intricately decorated headpieces, spire-tipped crowns, ornate breast and shoulder plates, necklaces, bracelets and anklets.

Lear himself looks suitably majestic, with a massive shoulder piece turned upward like wings and a high, bejeweled crown.

The music, played on gongs, percussive wood instruments, and sitar-like strings, deepens the lush atmosphere. Ohm David’s set, temple-like stonework with gigantic trees intertwined with its walls and columns, evokes the glory of the Khmer monarchs of centuries ago.

But if the production pleases the eye, it boggles the mind. The challenge with moving the story to a new setting is adjusting its different parts so that they all make sense in the new environment. Alas, they don’t.

If we are in Asia centuries back, why do the King of France and Duke of Burgundy, both suitors to Lear’s youngest daughter, Cordelia, appear in the same Asian dress everyone else wears? Are we to understand that these names, as well as those of Albany, Cornwall, and Gloucester, should be taken in quotation marks? Why does Lear appeal to the god Jupiter?

Dulaang UP does the play in both English and Filipino, and the problem is most stark in English. Listening to Leo Rialp, who plays the old king, speak Elizabethan poetry fluently while seeing him outfitted in the garb of a Khmer ruler makes the mind reel.

But even in Filipino, in which the adaptation gains more coherence (the sensible translation is by Nicolas Pichay), the problem remains. It appears most strikingly when Edgar, as the mad Tom O’Bedlam, warns those around him of the devil Flibbertigibbet. Couldn’t another name have been found to replace it?

One imagines another possibility left unexplored: rewriting the tragedy in toto. That’s what Guelan Varela-Luarca and director Dexter Santos did with “Romeo and Juliet,” to beautiful effect, in “#R</3J.” Akira Kurosawa did the same in “Ran,” his majestic version of “Lear,” moving the story to medieval Japan in the heyday of the samurai. (He even took out the Gloucester subplot.)

By changing the setting without recalibrating the finer points of the story, this adaptation left me feeling that it wasn’t taking place anywhere, unfolding in a no-man’s-land between the real world and the imagined. Without a distinct and credible world to move in, the characters become all the harder to believe in.

Watching this “Lear” brought to mind fond memories of a superior production, Nonon Padilla’s “Haring Lear” (2012) for Peta. Padilla set his reworking of the story in a clearly imaginary place but estranged the viewer with deliberate anachronisms and laying the artifice of the production in full view.

His Japan wasn’t real, more an amalgam of received images by way of Kurosawa films, classical Japanese theater and animé. The costumes were more silhouettes than real clothes. All the roles were played by men, most of them with heads shaven (save a thick-maned Lear). In a wonderful paradox, these distancing devices heightened and deepened the tragedy.

This “Lear’s” coherence as an adaptation is worsened by small moments that don’t make sense.

The battle between the armies of France and England is cut, so the capture of Lear and Cordelia seems bizarrely abrupt. (It’s otherwise a pleasant surprise that the text is trimmed substantially. The play runs a mere 140 minutes.)

Why are they brought tied to bamboo crosses in a world untouched by Christianity? (And anyway, they’re going to be hanged, not crucified.) When he arrives to challenge Edmund in the play’s climax, Edgar isn’t wearing a helmet or mask, as he is supposed to, yet strangely Edmund doesn’t recognize his own half-brother.

It’s clear that both Goneril and Regan, Lear’s evil and ungrateful daughters, have taken a liking to the bastard Edmund. But it’s a bit much to have Goneril get down on her knees to pleasure him orally while her steward Oswald is in the room.

It’s a head-scratching touch that reminds me of others in recent Mabesa productions (say, the duchess lifting her skirt to expose her thigh to her amorous steward in “The Duchess of Malfi” (2013), or the climax in “Hamlet Redux” (2006), in which the Danish prince and Laertes conduct their fatal duel karate-style but with daggers strapped to their shoulders.

And oddly, a snare drum plays at the final tableau of dead bodies. Meant to signal a connection to the source play’s Western origins (or so say dramaturgs Patrick Ortaliza and Juan Gonzales in their program notes), the sound only adds to the cacophony of ideas.

With “Lear,” Dulaang UP continues its practice of doing classical plays in both English and Filipino.

The English version was difficult to sit through simply because many of the actors were tongue-tied. A few were downright unintelligible. Many had trouble finding a connection between words and their meaning. Acting styles and registers varied, adding to the noise.

The versions I saw involved many of the same cast members, and all of them were more assured, spoke more clearly, and were far more believable characters in Filipino.

Jojo Cayabyab stood out as Gloucester, in both versions, victim of his own gullibility and the treachery of those around him, convincingly rendering him, like Lear, a “foolish, fond old man.”

But as is the case in any production of Shakespeare’s most harrowing tragedy, the performers in the title roles are the massive wheel on which the show turns, which is perhaps another reason this “Lear” falls short of the tragic. (To be fair, it’s a terribly demanding role.)

Leo Rialp’s Lear is a kind but naïve uncle, with the gravity of royalty but without the capacity for holy rage the role requires. His gaunt face, increasingly haunted by regret as his suffering grows, given whiskers and dark patches to resemble Hidetora Ichimonji, the protagonist of Kurosawa’s film adaptation, is the window through which we glimpse the interior terrain of his despair.

Joel Lamangan’s Haring Lear veers in another direction, dispensing with any sense of regal propriety. With head hung askew, jaw hanging open, he spews his curses at his cruel daughters with the coarseness of a commoner who has lucked his way to the crown. Unlike Rialp, Lamangan’s transformation from king to madman is all action: stooped shoulders, furrowed brows, hands clutching at his pate, and yelps and squawks.

Late work in a long career

My regret is that I never saw Mabesa at his best. The handful of shows I’ve seen over the past seven or eight years have all been seriously flawed. Their stories tend to be flattened, their emotional landscapes reduced to the digestible proportions of the telenovela.

Like “The Duchess of Malfi” or “Maria Stuart” (2009), this “Lear” suffers from a surfeit of emotion but a lack of tragic heft. Their protagonists don’t undergo that vertiginous fall from good fortune the genre requires. Too, their dramas are oversimplified, emotion painted in broad strokes and underlined by simple musical flourishes.

That being said, one needs to take the longer view and see how this one production fits into a lifetime of work.

Dennis Marasigan, himself a remarkable DUP alum of many talents, writes an appreciation of the company’s 40-year history in the souvenir program. In its early years, he says, many of the companies’ productions were “landmarks of Philippine theater.” Over four decades, remarkable works classical and contemporary, borrowed and homegrown, Western and Asian and Filipino, have unfolded on its stage.

If one mark of a teacher’s quality is what his students have become, then judging by the breadth and wealth of theater talent who have taken wing after leaving the roost (Marasigan provides a representative list), then Mabesa must be extraordinary. In the balance against this legacy, what are a few faulty works in the sunset of a career?

It seems right that, even as we note the shortcomings of this recent work, we acknowledge the long arc of a professional life that has made an indelible mark in the practice of a flourishing art, one that does so thanks in large part to himself and those animated by his spirit. After the criticism, the rest is gratitude.