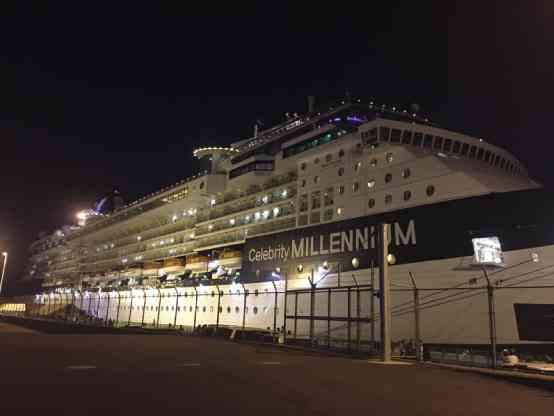 It’s value-for-money ‘modern luxury’ aboard Celebrity Cruises’ Millennium, which is set to visit Manila and Boracay in January next year

A more relaxed way to travel: riding the ‘Audi’ of luxury liners

In May, he gathered the entire 32-strong Alquiros clan— they are behind the Giligan’s Island chain of bar-restaurants—and joined the family’s patriarch on a leisurely cruise that took them to southern Japan and Korea.

“All my nephews and nieces came from abroad to join us and our father; that was the last cruise of my father before he passed away last Aug. 6,” recalls Alquiros.

Two years ago, the family had also gone on another Asian tour, aboard the Royal Caribbean, which took them to Singapore, Langkawi and Phuket.

He loved the experience of visiting Japanese port destinations that are otherwise not the usual tourist traps, plus the value-for-money convenience and ease of travel that cruising offered, that last month, Alquiros was onboard another boat again—this time the Celebrity Millennium, which allowed him to revisit the cities of Beppu, Kagoshima and Nagasaki, plus Kochi, a new addition to the route.

For Alquiros and an increasing number of travelers, cruising has become a compelling alternative to flying and hopping by land from one place to the next to see the world. Riding a luxury liner such as the Millennium —the smallest of nine Celebrity cruise ships at 90,940 gross tonnage, but designed for a more exclusive, high-end experience compared to Celebrity’s mass-market, family-oriented sister ships in the Royal Carribean line—comes out as relatively cheaper and hassle-free.

“I just pack and unpack once, and I get to see multiple cities,” says Alquiros. “It’s definitely cheaper and less stressful than going from city to city by land or by plane—going to the airport, through customs and immigration, all of that. You pay one time, and all your food is in, your accommodation is in, and your only additional expense is if you want to go down on shore excursions.

“When you travel by land, you pay for everything—the driver, the car, additional flights from port to port,” he adds. “And then you pay for your hotel. In Japan, when you hit cities like Kobe, Kyoto, Tokyo, it’s very expensive to stay in a hotel. But when you’re on a cruise ship, you pay only an average of $100 per day, and that already includes all your food.”

The downside for hardcore travelers, of course, is they get to spend only a few hours, at most an entire day, ashore, and only in port cities that can host the visiting cruise liner. But for casual travelers like Alquiros who like to take things easy, the relaxed pace afforded by a cruise voyage is more than enough.

The allure of traveling aboard a cruise liner like Millennium is precisely the right balance it offers between exciting onshore attractions and the pleasures of the ship itself. The six-day cruise that Alquiros took, which also saw a group of Filipino tour operators brought aboard by Celebrity Cruises, started in Shanghai, the embarkation point, then a whole day spent at sea cruising at a stately 24 knots before the ship docked at Kochi, Beppu, Kagoshima and Nagasaki in succession, before heading back to Shanghai.

The Celebrity Millennium, which entered service in 2000 and was refurbished in 2012, has a passenger capacity of 2,158. About 200 crew members are Filipinos, the biggest contingent. Efficient but warm, extra-courteous and highly trained, they are among the best reasons for a more than pleasant ride on the Millennium—from gregarious waiter Jimmy Luz of Isabela who charms diners nightly at the fine-dining Metropolitan Restaurant, to jewelry specialist Vivian Solis, also of Isabela, who holds court at the watch shop of the ship’s luxury shops section.

The assistant chief housekeeper is likewise Pinoy—Edmund Cadayona of Laguna—as are the head doctor and head nurse for the entire ship—Jenny Bartolome and Connie Asco, both of Bulacan.

They are part of about 954 crew members coming from 50-plus nationalities who collectively run a 965-ft (324m), 12-story mini-city of a ship outfitted with a raft of pleasure features and facilities.

The suite accommodations can rival luxury hotels—with the added touch, for balcony staterooms, of a private balcony with a view of the ocean; and for the higher-class units, virtual mini-villas with multiple sleekly appointed rooms, kitchen and bar, toilet with bathtub and extra-spacious private veranda.

“Celebrity Millennium is not ‘traditional luxury’ but ‘modern luxury,’ says Kelvin Tan, commercial director for Asia-Pacific of Celebrity Cruises. “If you equate it with hotels, we’d be more like Ritz Carlton or W Hotels. If with a car, we are more like Audi—not the Mercedes or BMW, but Audi. Our brand goes for the finer things in life, so when you look at our restaurants, for instance—we

offer one of the best cuisines at sea.”

Alquiros agrees: “The food was excellent —the best so far in the five cruises I’ve taken.” Ditto TravelAge West Magazine’s WAVE Awards, which handed Celebrity Cruises its “Best Onboard Dining” award for 2014. For the seventh consecutive year, the liner also emerged as the “Best Premium Cruise Line” in the 2014 Travel Weekly’s 12th Annual Readers’ Choice Award.

“Our focus is on well-traveled passengers, those who have seen the world, so we offer more high-end services like a destination concierge onboard,” says Tan.

“What we do is create destinations that are not run-of-the-mill itineraries. For the Japan tour, our target passengers have been to main gateways like Tokyo, Osaka, even Fukuoka, so we offer new places like Kochi or Beppu. Likewise, in Singapore for Chinese New Year next year, we will be offering places like Koh Samui in Thailand and Kota Kinabalu in Sabah. And our Asian itinerary now also includes Boracay and Manila.”

Tan notes that, while the cruise business is a mature market in the West, it’s catching on only now among Asians, many of whom desire to spend vacations closer to home, given their shorter holidays compared to Europeans and Americans.

“And, since it’s all-inclusive, with this kind of trip, it’s easy to do budgeting,” says Tan. “You don’t have to worry about extra accommodation cost, or food cost, or entertainment —what show to watch tonight, etc. Even if you don’t spend a single cent more aboard the ship, you can still have a wonderful holiday. It’s a concept more and more Asians love.”

Hong Kong, Singapore, China and India are already big markets for Celebrity Cruises. The Philippines is becoming one, too, apparently; bookings are up 20 percent this year, according to Rocky Estrella of Arpan Air, Inc., which represents Celebrity Cruises and its sister companies Royal Caribbean International and Azamara Club Cruises in the Philippines.

Alquiros, who on his first day aboard Millennium won first place in a friendly “Top Chef at Sea Challenge,” says he’s already saving up for a new cruise adventure. He’s eyeing the Royal Carribean’s bigger ships—the Oasis, the Allure, the Independence, which go to the US and Europe—next.