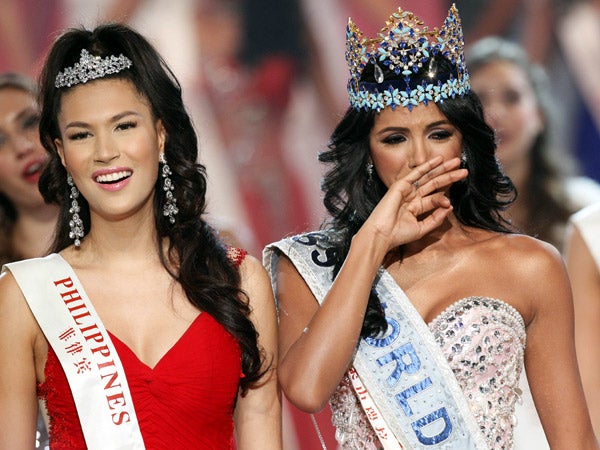 LONDON—Miss Venezuela, Ivian Sarcos, was crowned the 2011 winner of the Miss World beauty pageant on Sunday at a glittering final ceremony in London.

Wearing a pink dress with diamante studs that had giant frills slashed below the waist, the 22-year-old threw her hands to her face as she was announced the winner.

“I believe that the next Miss World should be a woman of responsibility and reason,” Sarcos said before winning the title.

“I believe the woman should be committed to the organization and help people in need. Beauty with a heart”, added the Venezuelan, who works for a broadcasting company and has a degree in human resources.

Miss Philippines, Gwendoline Ruais, was named the runner-up, while Miss Puerto Rico, Amanda Perez, came third in the contest, which was back in its home city to celebrate its 60th anniversary.

Some 113 beauty queens from Albania to Zimbabwe took their place on the stage, with the show being broadcast live to an estimated audience of more than one billion viewers in 150 countries.

Around 50 feminists staged a demonstration outside, waving placards reading “Objectification won’t achieve world peace”, “Being a woman is not a competition” and “Sexism is pretty ugly”.

Around a half dozen were veterans of the 1970 pageant protest, which caused a major disturbance.

Inside the Earls Court Two auditorium in west London, the few thousand fans cheered, waved national flags and shouted for their favorites.

To whittle them down to the 15 semi-finalists, several point-scoring rounds were held during the contestants’ tour of Britain over the previous two weeks, with the results revealed on stage.

The crowd were played clips from the talent round — where performers sang, danced and gave piano recitals — won by Miss Chile, Gabriela Paz Pulgar Luco.

Miss Ghana, Stephanie Adwoa Agyeiwaa Karikari, and Miss Indonesia, Astrid Ellena Indriana Yunadi, were the joint winners of the beauty with a purpose category, where contestants can highlight a charity project.

With the scores in and only the top 15 going through to the semi-final, Miss Puerto Rico topped the leaderboard, ahead of Miss Venezuela, Miss Philippines, Miss Ukraine and Miss Scotland.

It was announced that Ordos in Inner Mongolia, China, will host the 2012 competition.