‘Hibla’ at National Museum: Jane Arrieta Ebarle and the fabric of her being | Inquirer Lifestyle ❮ ❯ 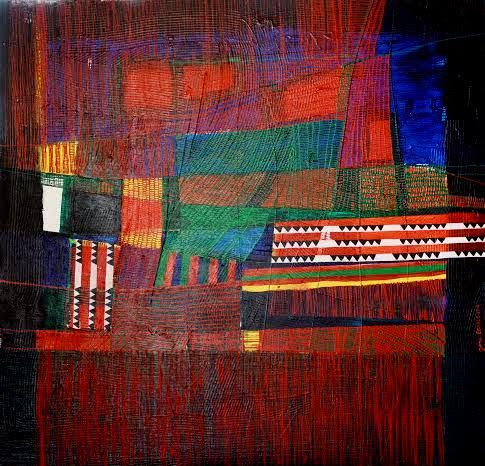 ‘Hibla’ at National Museum: Jane Arrieta Ebarle and the fabric of her being

IS “HIBLA” the next “Diaphanous”?

Started decades ago, reaching back to the 1970s, and propelled running into the hundreds of artworks based on the single, obsessive theme of transparency until the last days of its creator, the late Romulo Olazo produced the “Diaphanous” series, the defining works of his artistic career. Interestingly, the word diaphanous is often descriptive of a piece of cloth or fabric: as of a dress that is light and translucent, gossamer and gauzy, “see-through.”

On the other hand, the word “hibla” means a strand or a weave of fiber. “Hibla” was conceived and executed by artist Jane Arrieta Ebarle, starting a series that can claim origin from her 2008 solo show “Filipino Ethnicity.”

Already a scenario was starting to unfurl, a fascination and curiosity for the indigenous designs of Philippine tribal groups. In these initial works, Ebarle gave definition to the inspirational source of design based on such groups as the Tausug, the Manobo, the Maranao and the Kalinga.

She took visible pleasure in the delineation of these designs, which, to her credit achieved a tasteful balance between the literal adaptation of the design and the subtle improvisations which she introduced. This was in fact an assertion of her own identity as an artist.

For therein is the trap laid for the unwary and the insincere who dare to tread on hallowed ground, merely to sup and drink from without contributing to its enrichment. Inspiration is never, ever about duplication, for the act turns the voice, as it were, into a mere hollow echo, ironically succeeding in enervating the original source. Aware of this dilemma, Ebarle was determined on progressing from this point of departure.

It was providential that she got hold of a copy of “Philippine Ethnic Patterns: A Design Sourcebook.” This rich collection of ethnic designs provided the artist with a solid armature for her image-making, so long as she remained sensitive to her innovations. It was in that moment where, as Ebarle remarked in one interview that “her style was staring her in the face.”

Ebarle succeeded in transforming ethnic design into solid abstract paintings. This decision was practically an invitation to laborious work, but it challenged her skill at condensing the unraveling of strands to serve the dynamics of a flat-patterned abstraction.

This is the equivalent of threading strands into pictorial, illusionistic space. Indeed, the viewer is treated to a mesmerizing experience of appreciating an artwork where the referent—a piece of fabric—looms before him as the actual thing portrayed.

An additional layer of interpretation must be acknowledged in that Ebarle, being a staunch feminist, heightens an awareness of her liberation in the discovery of an authentic language sourced from ethnic fabrics. Admittedly, weaving is traditionally regarded as the province of a woman, together with other domestic arts, such as interior decoration, sewing, quilting, cooking and laundering. A word must be said, however, to whoever may try to denigrate an art drawn from fabric design.

The best argument against this is the example of the great French artist Matisse. The grandson of a weaver, Matisse was early exposed to the brilliant colors of fabrics even before he studied painting. Throughout his life Matisse collected swatches of fabrics and embroidery. He incorporated them into his paintings of odalisques, nudes and still lifes. His renowned cut-paper series was influenced by African Kuba textiles.

In Ebarle’s “Hibla” series, the element of line is maximized both in terms of their delineation and coloration. Fibrils or slender filaments of lines blanket large areas of colors that are inundated with these “fibrillations” of colors—carmine and rusty reds, vermilion and burnt orange, luscious chrome, saffron and lemon yellows, chartreuse and viridian greens, cobalt, turquoise and cerulean blues, russets and raw siennas, mauves, fuchsias, magentas and dark purples—that transform their warm tones into hot pulsating surfaces, expanding the illusionistic space and delivering a quivering impact.

It is obvious that Ebarle did not restrict herself to tribal dyes. One can only succumb to their sheer gorgeousness, which temptingly and narrowly escape the questionable bliss of decorativeness. Along the edges the unraveled fabric hangs like windblown tassels. The sheer threaded-ness of the lines, projected directly from the narrow nozzles of acrylic tubes, so rich with tactile qualities, even scraped and furrowed in certain passages, redeem her works from the merely literal to the painterly.

This is more obvious in the few works that are in black, white and shades of gray. Devoid of coloration, so distant from the ethnic chromatic temperament, these works based solely on passages of darks and lights, are surprisingly lively, never turning pallid, without adulterating the coloristic excitement of her other works.

Already, Ebarle’s “Hibla” series of works have been exhibited in the US and Singapore, but a singular honor has been accorded the artist by the exhibition arranged by the National Museum. It is titled “Threads on Canvas: Interweaving of Different Artistic Traditions.” Ebarle’s paintings were a product of collaborative dialogue between her and ethno-archaeologist Dr. Jenny Cano, who was then working with the National Museum. The works are on display in the fittingly named Hibla Gallery, dedicated to the permanent display of our country’s weaving traditions. As the foreword to the exhibition states: “Ebarle’s work is a tribute to every strand in these handloom fabrics. Her paintings are contemporary testimonials of Philippine traditional textiles transmitted through abstract art.”

The exhibition is on view until Nov. 15. This project is an initiative of the National Museum of the Philippines, under the administration of director Jeremy Barns and deputy director Ana Labrador, and the office of Sen. Loren Legarda. Call Jesse Arella at 5271215; e-mail [email protected]