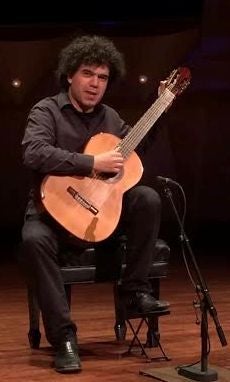 FRENCH classical guitarist Judicael Perroy. Like Cecile Licad, he will also do a recording project with French flutist Patrick Gallois.

FOR GUITAR enthusiasts, the music event of the month is French classical guitarist Judicael Perroy performing on Nov. 12 (7 p.m.) at the UP Abelardo Hall in Diliman, Quezon City.

A First Prize winner of the Guitar Foundation of America International Competition in 1997, Perroy tells Guitar International that winning competitions helps an artist but it is not everything: “The winner of the competition is usually the one who was more beautiful, or the one who wanted it more. It is difficult, but it is like what we say in France about democracy, ‘It is the worst system, but it is better than the opposite.’”

Set to record with brilliant French flutist Patrick Gallois (with whom Filipino pianist Cecile Licad has also recorded), Perroy said getting a good recording involves performing with an imaginary audience: “Remember the energy you get from performing in front of an audience, and try to capture that in the studio. It is easy to become boring, especially after you have done a few takes of the piece. You have to fight against that and continue to deliver the interpretation with the energy that you want.”

For tickets to Perroy’s recital, “From Bach to Villa-lobos, ” call TicketWorld at 8919999, or e-mail [email protected]

A new concert venue will be witnessed by music lovers when Sofya Gulyak performs at Circuit Black Box Theater in Makati City on Nov. 13 at 8 p.m.

Now touted as the CCP of Makati, the Circuit Black Box Theater is just one of the venues in a five-year P20-billion Ayala Land project that will transform the erstwhile racing track into a modern urban entertainment district complete with hotels, residences, offices and—yes—concert venues.

The Philippine Ballet Theater Inc. (PBT) will present the family Christmas favorite “The Nutcracker,” Nov. 13-15, at the Cultural Center of the Philippines.

By popular demand, the “Golden Boy of Ballet”—Joseph Phillips—will return to Manila as the Nutcracker Prince, partnering with homegrown ballerinas Veronica Ylagan, Lobreza Pimentel and Regine Magbitang, who will take on the roles of Clara and the Sugar Plum Fairy.

Phillips has won more gold medals than any American male dancer. He is one of only two American danseurs in Russia as principal dancers.