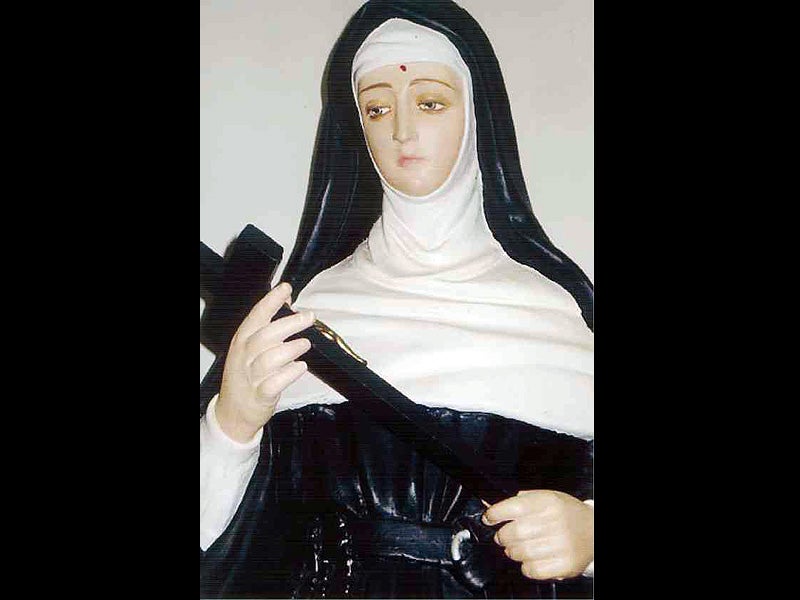 I was one of many devotees looking up to Sta. Rita de Cascia as her icon sat on top of the carroza decorated with red roses on the left aside of the altar during the 6 p.m. Mass at San Agustin Church last May 22, her feast day.

My friend, Oskar Peralta, the fashion designer, has been decorating the carroza since 1976. For the past three years, Oskar has been hiring florist Nolan Celeste to do it for him.

So there we were praying to Sta. Rita de Cascia, the saint of the impossible.  Since Oskar followed his client Providad Herrera’s advice that he make a devotion to this saint, Oskar has found his life changed. He has stopped being a worrywart. “Sta. Rita will take care of me,” he said. “Here I am almost 67 years old and I am not sick.  My business is good.”

Oskar told me that he has become more prayerful. Kneeling in front of the Blessed Sacrament at the Adoration Chapel of the National Shrine of Sacred Heart almost everyday, he finds himself very much at peace.

Who is Sta. Rita de Cascia?

If St. Jude Thaddeus is known as the patron of desperate cases, Sta. Rita de Cascia is the saint of the impossible.  This Dr. Gloria Habalo, an obstetrician-gynecologist of UERM, found out in 1961 when her baby boy was diagnosed suffering from a rare disease involving the bones.  He was only given two weeks to live.

Doc Gloria went to San Agustin Church with her baby and offered him to Sta. Rita de Cascia.  The boy lived although he was in a wheelchair most of his life. He died at age 47 three years ago.

Consuelo Silva suffered from breast cancer.  Not giving up, she would visit Sta. Rita at San Agustin Church, before chemotherapy.  Now, she is on remission and I saw her last May 22 during the fiesta.

Sta. Rita de Cascia became popular as the saint to run to by battered women. She was a battered woman herself, until her husband converted. She prayed to God to take her sons, instead of them committing murder by avenging the death of their father.  When she was all alone, she applied to be accepted as a religious of San Agustin, but she was refused several times; until she was finally accepted.  The devotion to Sta. Rita is spread all over the world including Florence and Cascia in Italy.

The commemoration of the discovery of the holy relics of St. Philomena was held at the Most Holy Redeemer Church in Masambong, Quezon City where one can find the shrine of the saint.

Tthe saint’s relics were discovered on May 24, 1802 after 1,500 years of being buried at the Catacombs of St. Priscilla in Rome.

Three tiles, set together, closed the entrance, and on them was an inscription which seemed to be: “Pax Tecum Filumena”. It means “peace to you, Philomena.   The letters were in red paint and surrounded with Christian symbols. After a little study, it was evident that these tiles had been disarranged, either because they were put in place in too great haste, or because someone not too familiar with Latin had laid them in wrong order.

The following day, when the stone slabs were removed, there was found within the burial place a thin, half-broken vase whose inner wall was covered with what appeared to be congeable blood. It was undoubtedly blood which had been collected at the death of the martyr, according to the custom of the Christians during the persecutions, and placed with the remains as a testimonial to her death by martyrdom.

This blood was loosened from broken pieces of the vase to which it adhered, and was carefully placed in a crystal urn. Those present, among whom were men of great learning, were amazed to see that these little particles of blood, as soon as they fell into the urn, glittered like burnished gold or silver, or shone like diamonds and precious jewels, or, again, were resplendent in colors of the rainbow. This extraordinary phenomenon continues at present day.

Those who wish to be members of the Living Rosary can write Universal Living Rosary Association at 430 Mayon St., Quezon City.  You will be given a decade of the Rosary to recite to connect with members all over the world reciting the same decade.

Our Lady of All Nations

Lipa Archbishop Ramon Arguelles will officiate the concelebrated Mass honoring Our Lady of All Nations on the “Day of Prayer” on June 2, 4 p.m., at the Holy Family Chapel in Virra Mall, Greenhills.  Rosary will be recited before the Blessed Sacrament. June Keithley-Castro will give a Marian talk at 5:45 p.m. Entrance of colors and Holy Mass is at 6:45 p.m.  Organized by Center for Peace Asia and Bahay Maria.

Fr. Faustino Mora, parochial vicar of the Archdiocesan Shrine of the Nuestra Señora de Guia, said that the dawn procession on the first Saturday of the month will be on June 4, 4:30 a.m.  The   Shrine has been holding the procession around Ermita for almost a year now.  Lauds are chanted after followed by Morning Prayer.  Holy Mass is celebrated at 6 a.m.

The efficacy of the intercession of “Mama Guia” was confirmed by former Ambassador to the Vatican Cristina Castañer-Enrile who told me that she was born in Ermita and grew up here. She calls herself “an Ermitaña.” Fr. Sanny de Claro who is the parish priest and Rector of the shrine has a special devotion to “Mama Guia”.  He will celebrate a special Mass on May 3l at 6 p.m.  The public is invited.