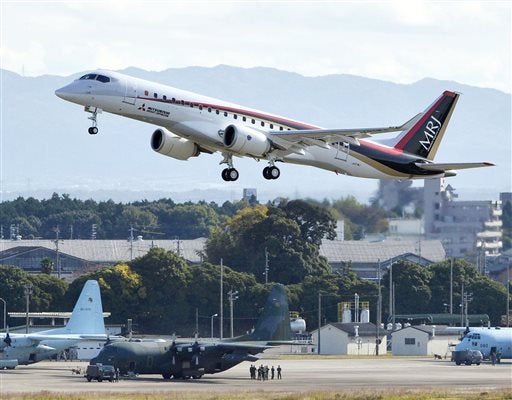 Japan's first domestically produced passenger jet, the Mitsubishi Regional Jet (MRJ), takes off from Nagoya Airport in Toyoyama, central Japan, for its first flight Wednesday morning, Nov. 11, 2015. Mitsubishi, a maker of the Zero fighter, took a step toward reclaiming Japan's one-time status as an aviation power Wednesday with the maiden flight of its regional jet. (Muneyuki Tomari/Kyodo News via AP)

NAGOYA, Japan—Japan’s first domestic passenger jet successfully took off on its maiden test flight Wednesday, culminating a decade of development for a program aimed at competing with Brazilian and Canadian rivals in the global market for smaller aircraft.

The Mitsubishi Regional Jet (MRJ) — developed by Mitsubishi Heavy Industries– lifted off from the runway at Nagoya airport.

The plane marks a new chapter for Japan’s aviation sector, which last built a commercial airliner in 1962 — the YS-11 turboprop that was discontinued about a decade later.

The MRJ will seat about 80 passengers and is seen competing with other regional passenger jet manufacturers such as Brazil’s Embraer and Canada’s Bombardier.

Firms in Japan were banned from developing aircraft by US occupiers following its defeat in World War II.