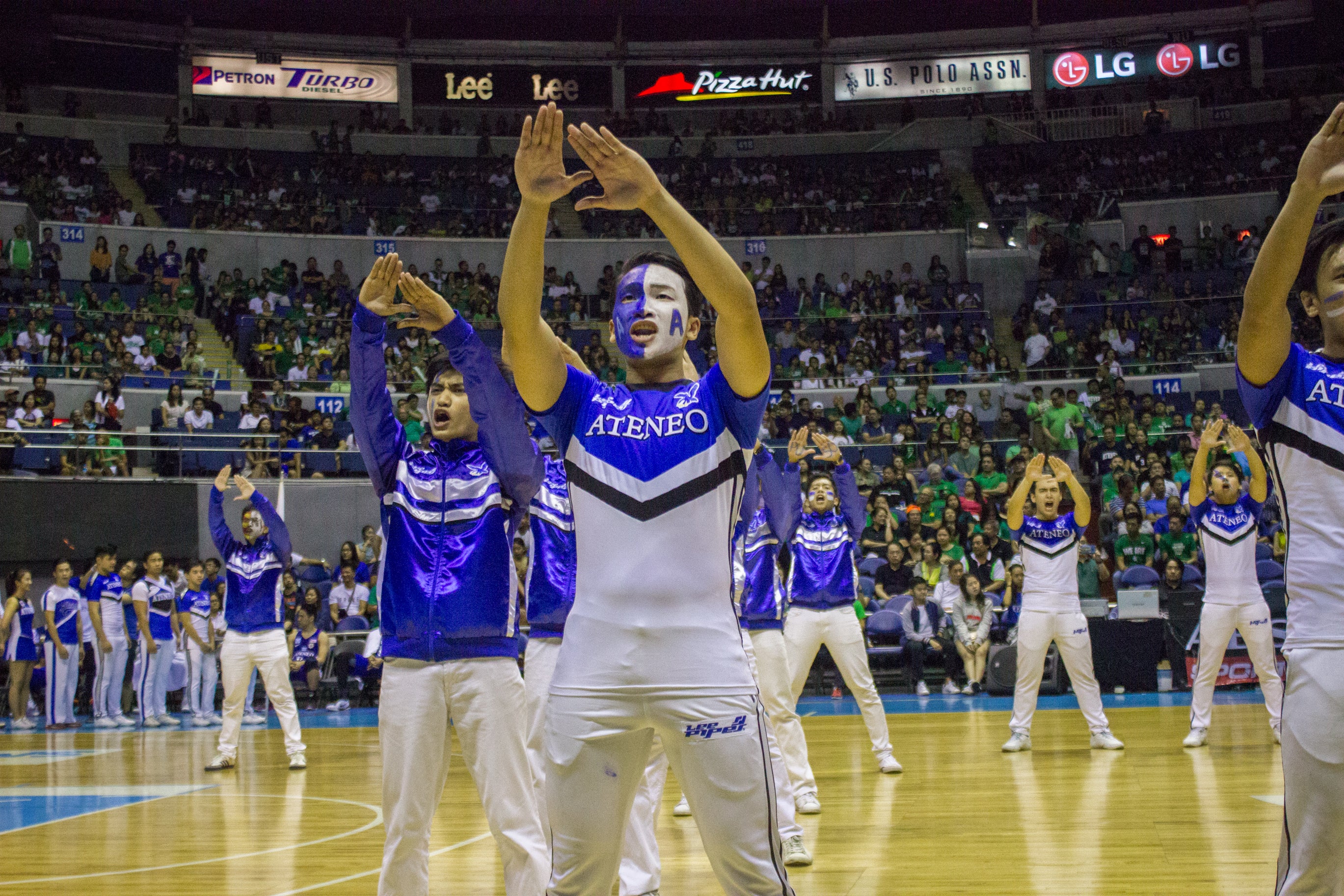 Hailed as “the best rivalry in Philippine collegiate sports,” the Ateneo-La Salle games have always been a spectacle. The venue turns into a sea of blue and green. The players play harder, the crowd cheers louder than usual and the cheering squads perform with more vigor.

Meeting for the second time this season on Nov. 8, the Blue Eagles were down at the half, 30-35. La Salle’s Animo Squad performed first, showcasing their cheerdancers and their cute little Archers.

The Green Archers crowd was loud and raucous… until Ateneo’s Blue Babble Battalion took the floor.

Its current members set the tone of the halftime, and the alumni members entered the court in the middle of the performance, sending the crowd to a frenzy. A hundred men and women led the vaunted “sixth man” to their loudest cheering in recent history.

The energy was constant until the final buzzer, Ateneo winning the game with 73-62 score.

“Proposals for alumni to perform have been there a while now,” says Blue Babble Battalion program head Ralph Aligada.

“These proposals have never been put to action due to several factors. Who will the Babble invite? How will the alumni train, knowing they have different schedules? When will the Babble showcase it?”

The ball started rolling when Babble head Aligada, coach JR Dimaano, cheerdancers and lifters coach Barbara Escueta, and alumni Mico Mañalac and Tana Puno had a discussion. They agreed that in the games, the alumni and some students did not quite “respect” the halftime show. It’s as if the alumni were not gung ho, or maybe there is a need to mix things up.

Skits about the band/brass/managers have been done, as well as drum lines. The next logical step was for an alumni halftime to materialize.

According to Aligada, it is easier to invite people now because there are enough alumni since the Blue Babble Battalion became a program sport of the UAO (Ateneo’s University Athletics Office) in 2001. To be invited, the performers must have finished at least a year with their respective units.

The idea was very well received by the alumni, the Babble, and the crowd. A lot of Babble alumni were willing to lend their time to perform, and the crowd’s energy was simply amazing.

While National University, the University of the Philippines and Far Eastern University are known for high-flying stunts and gymnastics, Ateneo’s Blue Babble Battalion is famous for nearly a hundred years of tradition and spirit.

As a member of the 2009-2010 Blue Babble Battalion, I was one of the alumni who performed for this momentous halftime show. The Ateneo crowd seemed to have given its loudest cheer to date. It was such an unforgettable experience and I would do it again if given the chance.

The bar for the Babble’s halftime performances has been set high. But I am sure they can live up to the expectations.