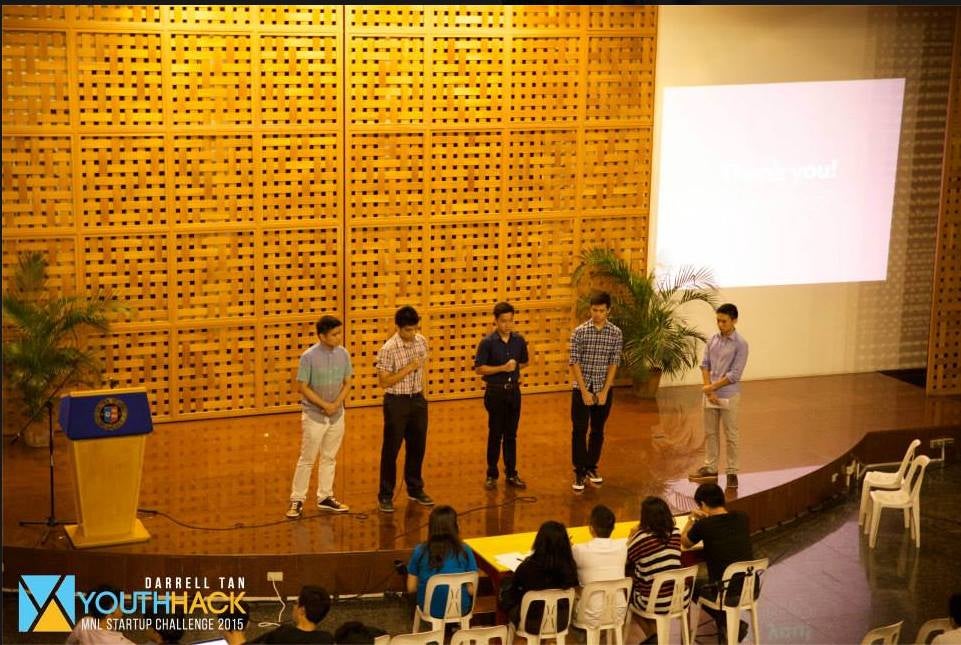 For this event, Earl and his friends struggled to think of a unique project that would benefit Filipinos.
“The truth is, Mica (short for Medical Care Assistant) was not our first idea,” said Earl. “We had major brainstorming before we came up with it. Weeks before YouthHack, I was still having a really hard time thinking of an idea.”

He added: “At first I thought of a Filipino dictionary app, a more precise version of all Filipino dictionaries combined. I also thought of a Disaster response and information system that would aid Filipinos in disaster awareness and response, and a government app that would synchronize various government applications in different offices. Yet, they were all problematic.”

On the first day of the event, the Ateneans came up with Ka.Tutubo, whose aim is to help indigenous people. Earl wanted it to be “a platform that would connect various indigenous products to the modern market and help it prosper in the consumer world.”

Julian, Diego, Manuel and Vinz believed in this start-up idea as well. They immediately started creating the business plan and the website prototype for the pitching competition the next day.

To improve their start-up, the team approached one of the available mentors, Dustin Cheng (CEO of Zap), for advice. Unfortunately, Dustin told them, Ka.Tutubo was very similar to an existing startup.

After the first day of the YouthHack Startup Challenge, the team left the venue feeling miserable. Although they continued brainstorming on the way home, most of their ideas seemed to go nowhere.

Suddenly, the team had an epiphany as they passed The Medical City. “We thought about the healthcare problems in our country,” Earl recalled. “Then we continued throwing in questions, opinions and ideas until ‘Mica’ was born.”

With newfound motivation, the group worked all night, pouring their hearts and energy into planning a start-up that would strive to help change the lives of millions of Filipinos. This start-up would make healthcare more accessible to Filipinos regardless of social class.

Earl explained that they envisioned Mica to be organized and paperless, an efficient recording of one’s medical history as well as an easy doctor-patient booking process.

The next day, all teams pitched their ideas to the judges. The team behind Mica won second place in the high school division, an achievement that set them on another exciting journey.

Last August, Team MicaPH submitted its application to The Village to Raise a Child program of the Harvard Social Innovation Collaborative (SIC). As one of the program’s 15 finalists, Team MicaPH was interviewed via Skype.

The team was chosen as one of the five best teams eligible to join the Igniting Innovation Summit at Harvard, the largest undergraduate-run conference on social innovation.

It’s been a long and eventful road to making Mica a reality, and for the Ateneans behind the ambitious healthcare start-up, the journey is far from over.

“People could really help us by providing what we need to push this idea into reality,” said Earl, “such as funds, connections, and possibly other suggestions to make our start-up more efficient. Just like anything else, we need the whole community to help the project push through.”