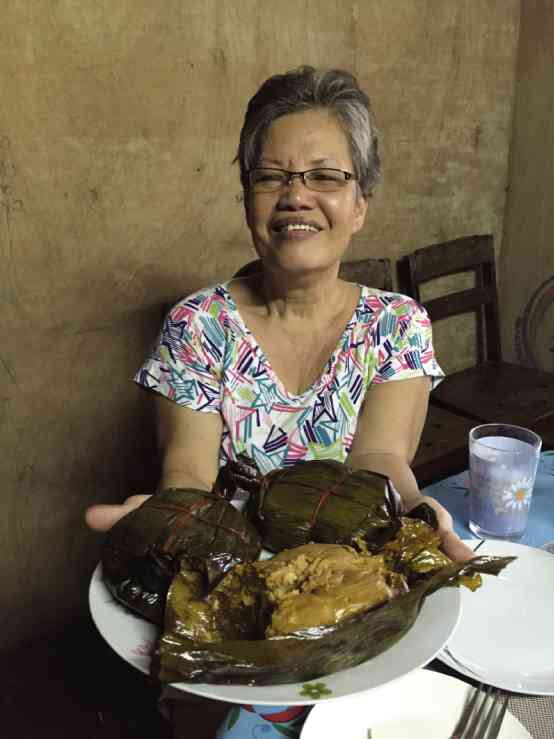 REBECCA Rodriguez and her famous “tamalos”

A recent visit to Samar made us wonder why, despite its rugged splendor and various attractions, it hasn’t drawn as many tourists as Boracay or Palawan.

Said to be the country’s fourth largest island province, Samar has towering rock islets in Marabut; the Ulot River in Paranas, which offers wild rapid rides; and the Sohoton Natural Bridge National Park in Basey, which boasts majestic caves and waterfalls.

The food in Samar has interesting ingredients and flavors. Provincial Tourism Officer Marvin Piczon was so eager to introduce us to its cuisine that as soon as we arrived at the airport, we were whisked off to a local restaurant.

Piczon recommended a plate of sweet dried baby squid, which he said is favored by Samar folk among all other kinds of dried fish.

Piczon regaled us with fascinating, mouthwatering stories about what his fellow Samarnon feast on.

While tinola is usually served as a soup dish with chicken as the main ingredient, in Samar it uses seafood, particularly blue marlin and lapu-lapu, which both abound in its waters. Tinola, Samar style, is seasoned with tarty tomatoes and turmeric leaves called dulaw, which is also a staple ingredient in escabeche and ginataang alimasag.

Samar’s meatloaf or embutido, referred to as bola catalana, is baked in a pugon, not steamed, while keseo, a white cheese endemic to the town of Gandara, is made with fresh carabao milk and pungent vinegar.

According to Piczon, the flavors of food in Samar tend to be a bit salty. Since it’s common for the people to grow crops in their backyard, they value the freshness of the produce.

The fisherfolk love rock oysters called sisi which they simply wash in seawater and drizzle with calamansi.

Zenaida Morilao is a witness to such eating habits. She wakes up early and heads to the meat market at 4 a.m. to buy the freshest, good cuts for her famous longganisa de Catbalogan.

She learned to make longganisa from her mother-in-law, who has been producing the local delicacy since the 1930s. There was no apparatus then and everything was made by hand, a craft which Zenaida practices to date.

Her longganisa is garlicky and flavored with annatto, native garlic from Ilocos, along with pepper, onion, vinegar and pork meat that’s been coarsely hand-chopped, not ground.

Her goods sell for P160 per kilo and she makes them only whenever an order is placed, to ensure the freshness of the longganisa.

Another much-raved-about homemade product in Samar is the tamalos—produced daily by the mother-daughter tandem of Rebecca and Joyce Rodriguez.

Their home kitchen is like a busy carinderia, with the cooking of a variety of viands and kakanin, from pickled batwan to suman wrapped in anahaw leaf.

Their version of tamalos—similar to the Mexican tamales— consists of soft dough, chunky pork and peanut sauce. The mixture is wrapped tightly in banana leaves, then steamed for four hours. Every day, the Rodriguezes make about 15 kilos, all of which sell out by afternoon (at P120 per piece).

Elizabeth de Guzman has been operating Ping-Ping’s Tinapa in Matobato barangay since 1983. The process has become quite a routine.

First, her team cooks two varieties of mackerel—alumahan and hasa-hasa—in a vat of water and salt. Then they smoke them—in a contraption that Elizabeth herself designed and crafted—for 40 minutes to an hour, using two types of wood shavings, one to produce smoke and the other to control it.

She makes almost 300 kilos of smoked fish every day— aside from special orders.

Managed by Marivic de Ganso, who has been very hands-on in baking her sweet treats, the humble street-side shop has been running for 30 years now, and continues to draw locals and foreigners alike.

There’s one word to know when you’re in Samar, most specially after enjoying its food: karasa, which means delicious.