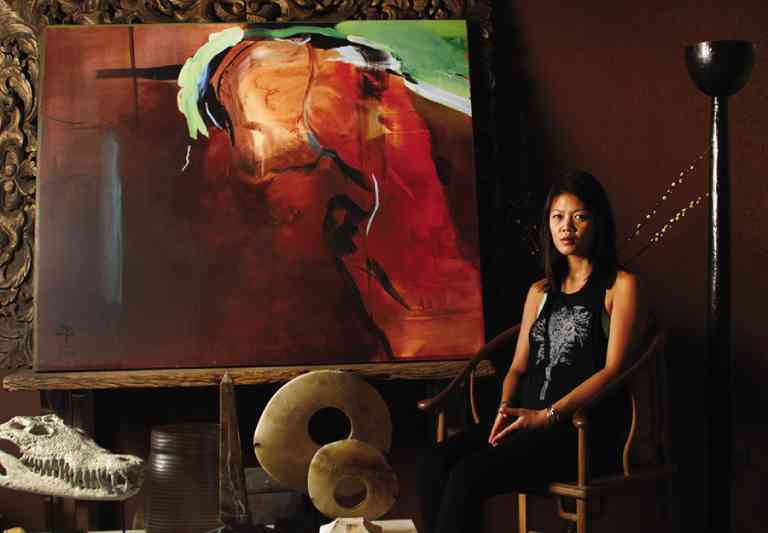 JANA Benitez in her universe: The animal skull and the stones capture the ambiguous silhouette in the artist’s work.

What the Apec guests will see in a gallery-store

Volatile brush strokes, saturated hues and radical abstractions give the impression that artist Jana Benitez is seeking freedom from conventions and her limitations. She finds solace in spiritual teachings to quiet her emotions, and turns to paintings to reflect her search and struggles.

This week, spouses of delegates to the Asia-Pacific Economic Cooperation (Apec) will see Benitez’s paintings at the W17 gallery-store. The artworks have been tastefully mounted and displayed with objects, in different settings, by W17 creative director Andy Vasquez-Prada.

When Benitez was only 12, she held her first exhibit at Ayala Museum, which drew Manila’s Who’s Who.

Her vivid canvases are inhabited by slurry figures of bodies and faces, hidden in transparent layers of colors and outlined in white or black strokes. They speak of energy and an acknowledgment of the spiritual and mental connection.

“I’m a passionate person who is deeply intimate with my creative process. It’s all about listening to energy and what is coming through,” she explains.

Benitez relies on spontaneity rather than having a fixed concept in mind. She abandons herself with layer after layer of paint.

One of the most striking setups comes from her “Winter Series,” a rectangle of contoured landscape in ochre, tan, brown, gray and black, and delineated in white strokes for depth.

On closer look, the landscape evokes silhouettes of a naked back, the derriere or the shoulder. “The body is also a landscape,” says Benitez.

Usually known for intense colors, she explains the choice of softer palette: “I was heavily involved with the bright wheel of colors before that. In a way, I was quieting down the palette to take on the subtleties of texture, wash and finish, and to focus on form. There’s a bit of layering of image to show an ethereal yet grounded space. It’s about dealing with polarities or opposites. The figure and the environment play off each other.”

Vasquez-Prada picks up the earthy colors, the contrasts, the sinuous lines and the spirit of the painting’s ambiguity by making an arrangement of stone, wood and glass decorative objects, set on large hardwood table.

During the interview, the creative team was still finalizing the setup.

Benitez expresses her admiration for Vasquez-Prada’s eye and is delighted to know that they have many things in common.

“It’s almost as if the things that come out of the studio emerge from the soil,” says Benitez. “That’s what interests us. There’s all these organic textures in this space, and my work has that same rawness. Yet, they turn out to be elegant.”

She adds: “There’s a lot of richness in texture, color, influences from many cultures born out of our travels.”

Although she’s associated with abstract painting, Benitez produced a work that is a nod to Peter Paul Rubens’ “Allegory of War and Peace.” The 17th-century painter advocated peace by showing the naked earth goddess Ceres sharing the wealth of the universe in a feast with the gods.

Despite her lack of training in realistic composition, Benitez was attracted to the geometry of Rubens’ work which was done out of intuition. She says his spontaneity was akin to this approach.

Benitez’s works on view were painted in Rhode Island, Chile, New York and Makati in the past years.

Over time, she sees how the character of her gestural abstractions shifts from vehemence to grace. Her brushstrokes may seem rapidly done, but the canvases demand us to look closer and pay attention to details.

To a trained eye, Benitez makes the effort to play with light, diffusing or concentrating colors.

“A friend said it takes seven years to be a beginner in tai chi,” she says. “In a way, it has taken these many years to learn how to get out of the way and listen during the creative process. When you’re painting in the beginning, everyone that you’ve ever met in your life is there with you—friends, Matisse, Marlene Dumas, Peter Paul Rubens, Nabokov, Pema Chödrön and Krishnamurti. As you delve into the process, people start to walk away, then it’s the ones that have really shaped you like family and mentors. Then it’s just one or two, who have enriched you, until it’s the artist in the studio… I’m there for a while; then I exit my own space. That’s when the real work begins.”