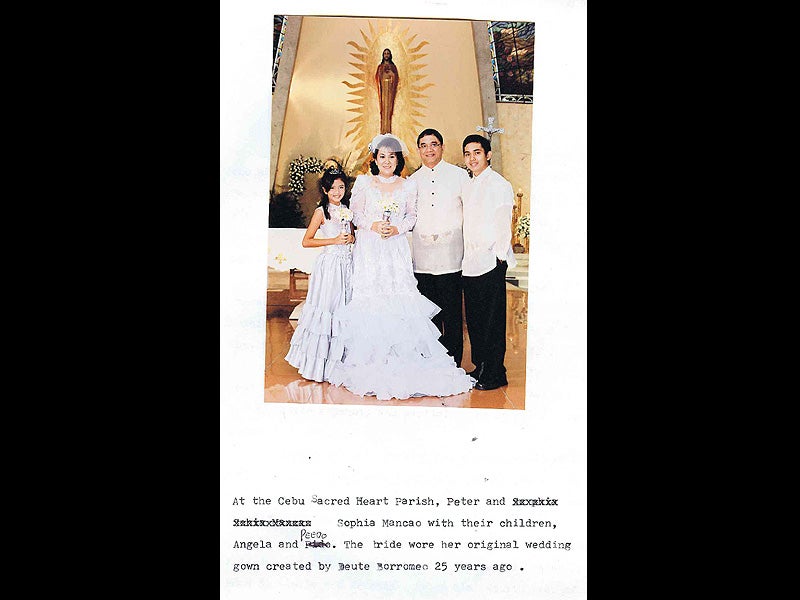 WEDDING TO REMEMBER. Drs. Peter and Sophia Mancao at the Cebu Sacred Heart Parish with their children. The bride wore her original wedding gown created for her by Deute Borromeo 25 years ago.

Dr. Peter Mancao, eminent cardiac surgeon in Cebu, and his bride of 25 summers, Dr. Sophia Macaranas Mancao, celebrated their silver wedding anniversary last May 3, 4 p.m., at the Sacred Heart Parish. It was the same day, time and venue as their marriage 25 years ago.

Peter is the son of equally eminent surgeon Dr. Mike Mancao, and Teresita Ybud Mancao. They reside in Cebu. Sophia is the daughter of engineer Sofronio Macaranas and Rose Ancheta Macaranas, who live in the USA.

Peter and Sophia have retained their youthful good looks. He is a health buff, working out daily at the gym of Casino Español, and participating in running events around the world.

Sophia may not practice her chosen field of endeavor, pathology, but keeps very busy raising the family, being a civic leader, and giving time to the Hospital and Health Facility licensing section of the Department of Health office in Cebu.

The Mancaos have been blessed with three children. Mikaela is a fashion analyst based in the USA. Peter Jr., Peedo to family and friends, is on his fourth year of nursing school. Angela at 10 is the baby in the family, and on this occasion looked very pretty in a long gown and a tiara.

There were oh’s and ah’s from the congregation as Peter and Sophia marched up the aisle to the altar. She wore her original wedding gown, preserved all these years in blue silk paper. “I just had to change some of the buttons,” Sophia said before the music played, as friends gathered to admire her.

The gown was one of the masterpieces of the late Cebuano couturier Deute Borromeo, whose prowess was legendary. In his youth he had trained with Balenciaga and other Paris designers. To him, creating clothes in Cebu was more a vocational hobby than a lucrative profession. Some grand dames have kept Deute’s ternos in their wardrobes.

After the mass and renewal of vows Sophia and Peter received numerous well-wishers at the Cebu Country Club – also where the original reception had been held. She changed into a silvery draped sheath and put the Deute gown on a mannequin for everyone to admire at close range.

Among those present were some of the original wedding sponsors. They included Dr. Potenciano Larrazabal Jr. and his pretty wife Zeny, Dr. Teodulo and Elsie San Juan, Dr. Manet and Dra. Mila Tolentino, Luz Mancao Sandiego, Dodong and Nita Peña, Dominador and Remedios Tenazas, and Carmencita Leocadio Ybud who put some of her original ideas into action.

Menchit thought of having as many couples among family and friends to renew their marriage vows on this occasion, and share the limelight. Among them were Edmond and Gina Macaranas, Martin and Edna Macaranas, Marvin and Ophie Macaranas, Dr. Don and Bobet Cinco, Jonathan and Carissa Nuevo, Val and Boguing Sandiego, who gifted the celebrants with a Santo Niño de Cebu image, Eliseo and Anna Galang, Raffy and Martha Sandiego, Boboy and Rosie Mancao, Sean and Joanne Lapus, Jute and Rosie Sandiego.

Most amused during the church rites and at the celebration was Rev. Fr. Ernesto Javier SJ who officiated the ceremonies, just as he did on May 3, 1986.