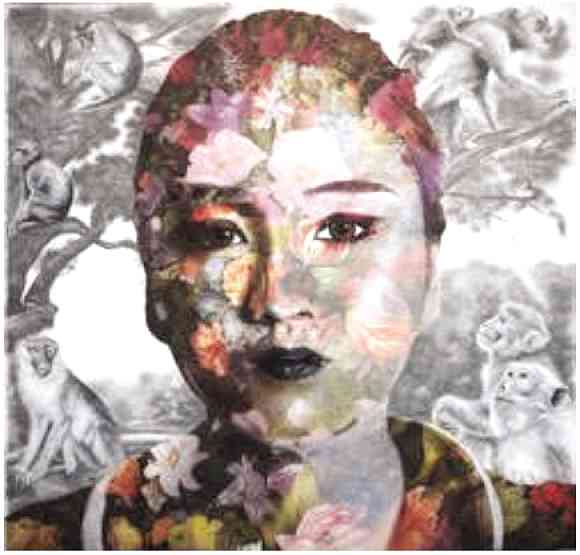 Andres Barrioquinto: The revenge of the nerd

Andres Barrioquinto, all of 40, has the make-believe toughness of a little boy and the pale complexion of someone who works late into the night.

He is tall and looks even more so, thanks to a spiked hairdo and a monochromatic way of dressing. Andres is also mostly wordless, his expression kept as blank as possible, much like the Japanese Noh masks that appear in his earlier works.

While he was named one of the Cultural Center of the Philippines’ Thirteen Artists over a decade ago in 2003, he’s in high contrast to the original 13 Moderns—the Entengs, the Botongs and even the BenCabs, whose hail-fellow-well-met nicknames say it all.

The first 13 Moderns were goodfellas, members of a mafia of ordinary Joes, the kind of guys whose studios seemed to be fitted with revolving doors that allowed open-ended libations, assorted salu-salo and the usual neighborhood tribal rituals only much later in their careers.

Andres, in contrast, is a nerd.

His studio is squirrelled away in a northern Manila suburb, the road so complicated and meandering that we must be escorted by Derek Flores, his manager.

The studio is a spanking new townhouse, in wall-to-wall white, neat as a pin, with cupboards and even the rice cooker neatly labeled. Signs on the blank walls carry various exhortations to keep the place tidy.

There are three or four floors, all identical, all pristine, except for a couple of rooms set up with easels and various works—all breathtaking—in various stages of evolution. The easels are surrounded by enormous sheets of white paper, taped to the wall.

Andres has scribbled notes and ideas for titles in disciplined columns, while arranging sketches and photographs around them. Only a watercolor of a perfectly drawn ear interrupts the symmetry.

Hanging in one room is an oil portrait of Andres by good friend Butch Payawal. It shows Andres deep in thought, imperial clouds and origami bats fluttering around his face, one hand covered in owlish tattoos of infinite fineness. It’s called “Mother I Can Feel the Soil is Falling over My Head.”

At one end of the main atelier is a fire-engine red carpenter’s trolley crammed and classified with every possible size of brush and bristle, pen and pencil. He almost apologetically explains, “Things are much cheaper in hardware stores.”

We next take another road trip to Andres’ home, also perilously modern, decorated in gray stone, hardwood and metal. A 20-foot-high door swings open on its midrib to a Milanese-style residence, black leather and chrome, perfumed with an invisible veil of lemongrass. An oil of a giant skull overlooks one landing.

There is a tall glass-fronted fridge crammed with Stella Artois and Coronas, but we are served wine in oversized goblets, along with the bounty of the north: trays of Pancit Malabon and cushion-soft rice cakes.

He leads us up the stairs to his home studio, past the works of his wife Iya Consorio, who specializes in demented octopus girls, an allusion to the Hiroshima of unhappy lives. Iya herself is dressed in white and looks like a tiny samurai doll, with jet-black hair down to her hips (her religion prevents her from cutting her hair) and bright red lipstick.

Dominating the studio is a portrait of a lace-covered temptress, one eye a human hazel, the other a wolfish gold, her brows covered with iridescent insects and silenced by a moth and a tangle of Flemish flora.

Whatever do you think about while creating these works? Andres replies impishly, “When I paint, I think about life, and when I am not painting, all I can think about is art.”

Derek whispers that Andres is addicted to The Doors.

“Because I listened to The Doors,” says Andres, “I became very interested in Jim Morrison, so I read his poetry book, ‘American Prayer.’ I also listen to Morrissey, and that actually led me to Oscar Wilde.”

That coded statement induces just the sort of double-take that Andres specializes in: both flamboyant and eloquent; one aggressively so, and the other, well, straitjacketed with repression.

In his publicized artist’s statement, Andres says, “My work is perhaps more sharply individualized than the realist, therefore more dramatically my own, sometimes to the point of eccentricity.”

Indeed, Andres traveled the same arc as the now-famous Ronald Ventura, the “scourge” of the Filipino art scene, who rattled cages across the region in 2011, when his epic “Grayground” broke the million-dollar mark.

Ventura was a teacher at the University of Santo Tomas Fine Arts department where Andres also happened to be enrolled. Those halcyon days were between 1995 to 2000. (“Ventura would call off his class and we would all go drinking,” Andres grins.)

Alongside other artists, they formed a lithographers’ group, called the “Tres Acidos,” toiling away for a pittance, eventually winning various awards. They were both eventually recruited by a colorful gallerist, with whom both Ventura and Barrioquinto eventually parted ways.

It was a hard life, Andres recalls, shunted back and forth among galleries, some offering a few thousands of pesos for several works.

On this particular night, Andres is flush with reports of his brilliant showing at the Leon Gallery’s “Spectacular Midyear Auction” last June, with movie stars and politicians outbidding each other for a single new work, “Love Left Behind” (2015), Andres’ rather personal ode to his wife.

It shows a woman, with twin topknots, looking into a barren forest, her back covered with a kaleidoscope of butterflies.

It went for exactly P3,036,800 including buyer’s premium, after spirited bidding. The room burst into applause at the end.

He remained fast friends with Ventura and collaborated with him in various works, including one fascinating piece, called “Ripe with Decay” (2002), that is tucked away in his home. It shows, on one side, a wide-eyed face wearing a small child as a turban, and on the other, a torso tortuously flayed. You can instantly tell the trademark obsessions of each.

Over the last decade, Andres has managed to make sense of the otherwise chaotic art world, with what Derek describes is a simple philosophy of “keeping his feet firmly planted on the ground,” despite the rave reviews and a waiting list of importuning collectors.

Andres, after all, remains relentlessly bourgeois, preferring middle-class values and pursuits—a modest townhouse that he preferred to save up for, a workhorse van that does double-duty to ferry canvases and supplies, no entourage to speak of except his little sprightly daughter.

No top-down sports cars here; the splashiest purchase sitting in his garage is a behemoth George Foreman barbecue grill that looks like it gets a lot of use.

Despite shows in Taipei, Singapore and London, there is no international representation. Derek first met Andres, in fact, when he went to niggle about a work over dinner and drinks. (Derek is highly social and arranged the meeting at a small bistro near ABS-CBN.)

Since then, he carefully accumulated a few of Andres’ pieces and eventually morphed from fanboy to drinking buddy and confidante, before taking on the mantle of manager. It took Andres all of two years to pop the question.

In his wife’s sold-out show in the Ayala Museum Artist Space a month later, Andres is relaxed and wreathed in smiles. “I always feel better when it’s not my own show,” he says with a sigh of relief. (At the chaotic Art Fair 2015, earlier this year, he said he felt suffocated and stressed.)

He’d been working for months on a new show, called “Unjust Fixation,” for the Bazaar Art 2015, put together by chichi Harper’s Bazaar Indonesia and set at the Ritz-Carlton Jakarta last August. Andres showed eight new works, six of them already spoken for by his Indonesian collectors.

He has also just launched his limited-edition “toy collection” called “Dead Hunger,” a nod and wink at every starving artist’s predicament.

One sculpture features an artist with a gorgon’s eye, a palette and a turnkey attached to the top of its head; the other is a grinning mare with a half-dozen teats pressing what one presumes are the last drops of creativity into a coffee mug.

Truth be told, Andres has been working at this break-neck pace, nonstop, since he left college (just a few units short of a degree)—punching out, like clockwork, a solo exhibition at least once a year, every year for the last 13 years.

In an ideal world, Andres says, he would spend more time with his family and just paint four or five canvases a year.

In the real world, the nerds always have their revenge.