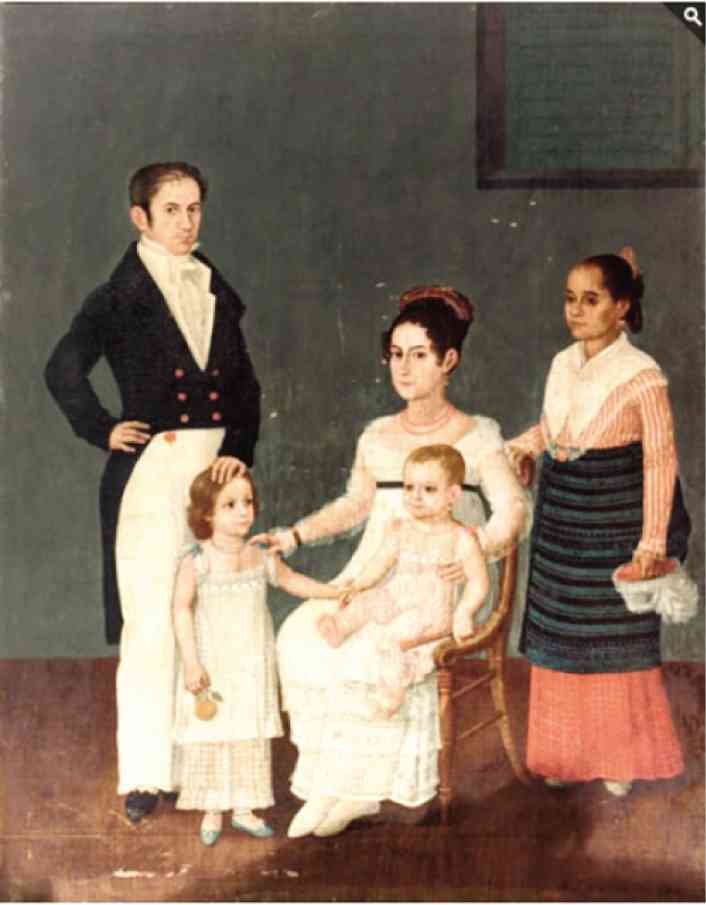 ARZEO’s portrait of the Azcarraga family, dressed to the nines, with the well-dressed ‘yaya’ at the right.

An anonymous member of Manila’s billionaire boys club has just pulled off another coup—by winning two historic Filipino masterpieces in a European auction and bringing them back to their rightful home in the Philippines.

For weeks, the small circle of heavy hitters, who obsess more about early 19th century art than others do over a BenCab, were sleepless over the arrival of a pair of previously unknown and extremely rare works, both titled “Retrato de la familia Azcárraga” (“Portrait of the Azcárraga Family”), on the Spanish market.

The stupendously-sized oils, the first measuring about 7.5 feet by 6 feet, and the other, 6 feet by 4 feet, were on offer at the Madrid auction house Duran Arte y Subastas.

They are the work of Juan Arzeo, one of the foremost Filipino painters of the early 1800s, who practiced his art in the district of Fernando de Dilao (now Paco).

Arzeo has been called “the only other painter of the era who could hold a candle to the legendary Damian Domingo.”

The Madrid magazines were practically licking their chops over the prospect of fantastic prices for both pieces, on the wings of a strong Filipino economy and its aggressively acquisitive collectors. They were not disappointed.

After a frenetic tussle—both in the sale room and from avid telephone bidders—the bigger piece was hammered off for P9.2 million, the smaller one for P5.7 million, and the grand total for the pair, including premium, was the tidy sum of P18 million or about $390,000—small potatoes compared to the million-dollar club of Anita Magsaysay-Ho, Botong Francisco, BenCab and, yes, Juan Luna, but still a world record.

The rumor is that the triumphant collector with very deep pockets had sent a personal emissary to win the works “at any price.” And thank goodness he did, because the works are not just by a revered artist, but crammed full of information on Manila in the 1820s and its complex cast of characters.

Even more significantly, the oil paintings show the worlds of East and West, of empire and colony, in single, almost cinematic frames.

Most known works by Arzeo—and there are a mere handful catalogued and mostly squirrelled away by the Spanish friars in their convents—have been of princes of the church and various saints (St. Anthony and Mary Magdalene).

These particular portraits feature the fascinating Azcárraga family—the parents, siblings, and most unusual, the Filipina nanny—of General Marcelo Azcárraga, war hero and senator for life, who was also the first and only Spanish prime minister to be of Filipino blood.

He doesn’t appear in either portrait, having been born almost a decade later in 1832, but the extraordinarily rare works tell a multitude of stories. (Older Manilans will remember Azcárraga as the name given to the broad boulevard that cut from Tondo into Binondo, and is now called Recto Avenue.)

Dated and signed “Manila, February 16, 1824,” it shows one of the little girls holding what looks to be a ripe santol. A window with a grid of opaque panes, most likely capiz, is in the background.

Most intriguing is the Filipino nanny: a true “India Elegante,” dressed in the classic tapiz (over-skirt) and saya (skirt) of the time, a prim triangular panuelo (shawl) edged with lace, wearing gold earrings and matching peineta (comb), all signals of an upper-class Filipino woman, according to fashion historian (of late) Gino Gonzales. She holds in one hand what appears to be a baby bonnet trimmed with feathers.

Doña Maria Isidra, wearing an Empire-waist frock, has been described as a “mestiza de Albay.” Her siblings were the influential and wealthy Palmera brothers, who were rumored to have aided and abetted various rebellions. (They were never brought up on charges because their Spanish lineage would have embarrassed the regime.)

Jose Azcárraga was also a popular bookseller (purveyor of the latest info-tech, windows to the world, since that’s what European books were at the time), and had his store on the chichi Escolta (Manila’s version of Fifth Avenue and Bond Street rolled into one).

The 1820s were an amazing era, coming off a century that spanned the French Revolution and Napoleon’s exile to Elba, with men like Jose Azcárraga and the Palmera brothers brimming with newfangled ideas such as liberty, equality and fraternity.

It’s not surprising that the Filipino nanny would be cosseted and included in the family tableau, adds Gonzalez, or was she a Regency oddity like the blackamoor statues in fashion in European courts? It clearly shows a new wind blowing, certainly the stuff that ignited the Philippine Revolution.

Whatever the reason, she appears once more in the second portrait, dated November 1827, this time with Jose Jr. on a rocking horse, clutching its tasseled reins, and his baby sister Pilar (later to be married to the Conde de Albay).

Their precise ages and names are inscribed at the bottom: Jose at age 3 and a-month-and-a-half; Pilar, one year and one month.) In this work, “la ninera filipina” appears even more resplendent in a fully embroidered blouse and decorative stole. Baby Pilar is also in what looks like a translucent piña dress, also richly embellished. (Gonzales notes that there are similar pieces to be found in the archives of New York’s Metropolitan Museum of Art.)

It’s a delightful turn of events to see the balance of trade now flowing back into the Philippines, and the return of many superb pieces once in foreign (and colonial) possession, to the land of their birth.