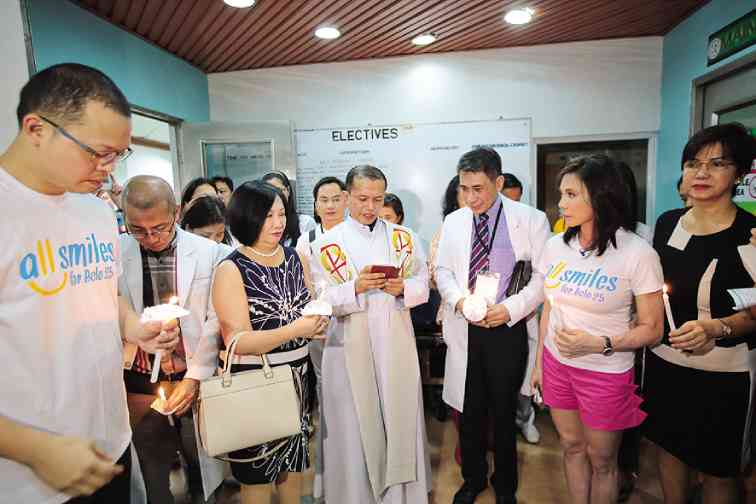 A fresh start for 21 children with cleft lips and palates

AS IF growing up “fat and ugly” wasn’t enough, Dr. Vicki Belo had to constantly deal with mean kids who taunted her for being an adopted child. Having lived through childhood bullying, the famed beauty doctor now wants to spare certain children the pain and psychological trauma of growing up “different.”

As part of the Belo Medical Group’s (BMG) 25th-anniversary celebration, Belo and her team of doctors and nurses recently partnered with colleagues at José Reyes Memorial Medical Center to operate on children with cleft lips and palates.

“All Smiles for Belo 25” sponsored the operation, including pre- and post-operative care, of 21 children—some as young as four months old—from poor families.

Two older children with cleft palates required additional reconstructive procedure to improve their noses (rhinoplasty) after initially being operated on four years ago in a different partner-hospital.

“It gives me immense joy to see these kids become whole again,” said Belo. “One of our earlier beneficiaries, a 17-year-old girl, is already having rhinoplasty. She’s quite tall and pretty. She told me she wants to become a model.”

A typical lip- and cleft-palate operation costs from P50,000 to P70,000—excluding preliminary examinations, lab work and post-operative care. Barring any complications, the patient is discharged from the hospital one to three days after the operation.

According to a study done by Murray JC et al., cleft lip and palate are “congenital anomalies” resulting from a genetic defect where the unborn baby’s upper lip and palate or roof of the mouth fail to fuse together.

The exact genetic defect and factors causing it are still unknown, but experts suspect that environment and poor nutrition play a big role. The condition is more common in developing countries, particularly in Asia.

“Even adults with cleft lips and palates can still undergo an operation,” said Dr. Philip Buñag, BMG assistant medical director. “But the earlier the operation, the better it is to spare the person from the psychological impact of being teased and treated differently. That’s why we’re focusing on children.”

Buñag also debunked certain myths associated with cleft lip and palate. It’s not true, for instance, that pregnant women who’ve had a bad fall would end up giving birth to cleft-lipped children.

“They should stop blaming themselves because it’s not their fault,” he said.

But if not addressed early enough, the condition could permanently affect a person’s speech and ability to pronounce words properly, even after undergoing an operation. In some cases, it even leads to pneumonia.

“Because of the opening in these children’s palates, food particles could go inside their respiratory tracts and lungs when they eat,” said Dr. Sheila Acosta, one of BMG’s resident doctors. “This condition could cause infection and pneumonia.”

BMG did a number of medical missions to “bring back children’s smiles” in the past, said Belo. The one held a few weeks ago, apart from being its biggest, marked the first time BMG partnered with the government-run hospital.

“We’re very grateful to the José Reyes staff for the support,” said Belo. “We’re very happy to have found a new home. Because the hospital minimized its charges, we were able to accommodate more children in the program.”

Belo informed the public about “All Smiles” a few months ago in her Instagram account. Since she didn’t limit free surgery to children of poor families, the response was tremendous.

But what she witnessed during registration melted her heart, as it showed how generous Filipinos are. When parents from middle-class families saw how poor the other applicants were, they voluntarily withdrew their children from the program in favor of those who were more in need.

This wasn’t BMG’s first time to give back. Apart from sponsoring the operation of children with cleft lips and palates before, it also helped build houses for victims of Supertyphoon “Yolanda” and donated an undisclosed sum to families of the “Fallen 44” policemen killed in Mamasapano.

It is also helping a number of burn victims like lawyer Raissa Laurel, who lost both her legs in a bombing incident at the De La Salle University campus on Taft Avenue after finishing the bar exams in 2010.

“I’ve always believed in the saying that your left hand shouldn’t know what your right hand is doing,” said Belo. “Unfortunately, some people think we’re not doing anything. It was very difficult for me to finally arrive at a decision to announce this publicly.”

Her father instilled in her the need to help the poor early on. The older Belo viewed one’s station in life as a mere “accident,” and those with more are duty-bound to help those with less.

Helping rehabilitate burn victims by giving them free access to BMG’s numerous lasers would have been an ideal flagship program for a company that is into beauty. But Belo and her doctors decided to spend a bigger chunk of its charity funds on kids with cleft conditions for several reasons.

“Unlike in the case of burn victims, the effect on these children after just one operation is immediate,” she said. “Because of what happened to me as a child, I also feel an affinity with these kids and what some of them are going through.”

Belo, who was given up by her biological parents for adoption when she was barely two weeks old, knew early on that Nena and the late Ike Belo, one of Inquirer’s former lawyers, weren’t her real parents.

Every night, she would recall her father telling her stories of Princess Veronica and how her adoptive parents doted on her. Unknown to Belo, it was her father’s way of preparing her.

“When I was very young, I wanted to be like Princess Veronica,” she recounted. “I even told my father I wish I was also adopted. And you know what he said? ‘But you are.’”

Belo had no issues about it. In fact, she had a happy childhood until she entered elementary school where her origin became an open secret. To further complicate the situation, her older biological sisters also went to the same school.

Her siblings always referred to her as their kid sister. How can that be, the other kids would ask, when she’s a Belo, while her sisters’ last name is Cancio? It was a time when the stigma of being an adopted child was greater.

She grew up thinking that if you’re fat and ugly, people would give you away. At the tender age of five, Belo already told herself that she would one day make everyone beautiful and handsome.

“Only then would everyone be loved,” she said. “I just didn’t know how to get there because I was so young, but I promised myself that I would find a way to get there.”