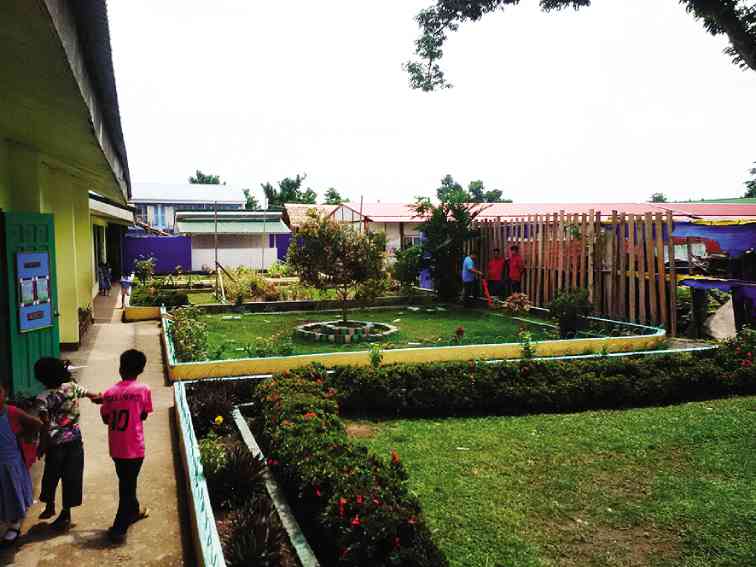 PAWING Elementary School amid ongoing constructions and improvements inside the campus

The town of Palo, Leyte, shows all the signs of a booming and dynamic town.

It was hard to tell that this town was a complete desolation only two years ago.

Palo, Leyte, was the hardest-hit town by Supertyphoon “Yolanda,” the strongest typhoon in living memory. It killed at least 6,300 people; more remain unaccounted for.

But the tragedies and the uncountable sorrows experienced by the people of Leyte all seem like a distant memory.

“We were the first restaurant to reopen,” said Ludette Virtucio Ruiz, proprietess of popular local restaurant calle Z Café in Tacloban City. “We opened on Nov. 22, 2013. After the storm passed, employees were flocking back to our restaurant. They wanted to work; they wanted to help.”

“We opened the café because so many aid workers and volunteers didn’t have a decent place to eat and relax,” she added. “The restaurant also became a place for reunions; a place for family and friends to catch up and gather news.”

Ruiz had to scour the local markets for ingredients; the prices were terribly high because of inflation. The prices of consumer goods and construction materials skyrocketed in the aftermath of “Yolanda.” But even then, the people of Tacloban endured.

“Tacloban, and the province of Leyte, recovered very quickly. In two years, the majority of all foreign aid workers and international aid groups in Tacloban are gone,” said Ruiz. “In any given place, the time to recover from a major calamity is usually five years; here in Tacloban, it took only two years for almost everything to go back to normal.”

The largest food chain in the country, Jollibee, recently opened its 900th store in Palo, Leyte. The new Jollibee branch in Palo is the 112th store in the Visayas and the 900th store worldwide.

The choice of Palo, Leyte, as the place to open the milestone 900th store is no accident, according to Jollibee Food Corp. president Joseph Tanbuntiong.

“Every time we do a milestone celebration, we always look for significance in choosing the site, we look for a place, a town or a community that has significant meaning. We consciously chose the Palo branch as our 900th store. We want to honor the resilience of the Filipino spirit, how we rise above adversity.”

All the employees of the Jollibee Palo branch are locals; the 517-square-meter branch is fitted with the latest updated design interiors of Jollibee.

“We were looking for ways to improve education; what we found out was there were a lot of dropout students. When we dug deeper, we discovered that the issue was hunger. When the children are hungry, they could not attend classes. When they are hungry, the children cannot focus on schoolwork. There is a high percentage of malnourished children; they cannot concentrate on their studies. It’s hard to focus when you’re hungry,” said Tanbuntiong.

“What we did is to come up with a school feeding program for Grade 1 and Grade 2 pupils. What’s nice about the program is that it’s sustainable. After a few years, we will leave the project to the school, together with the local government unit in the area. So far we have reached out to more than 1,000 schools, and now over 100,000 pupils are being fed through the program nationwide.”

“They say that a new Jollibee store in a town is a sign of economic growth,” said Bob Abellanosa, Leyte First District provincial board member, who was present in the Jolibee Palo branch opening. “This is a sign of more positive things to come for Leyte.”