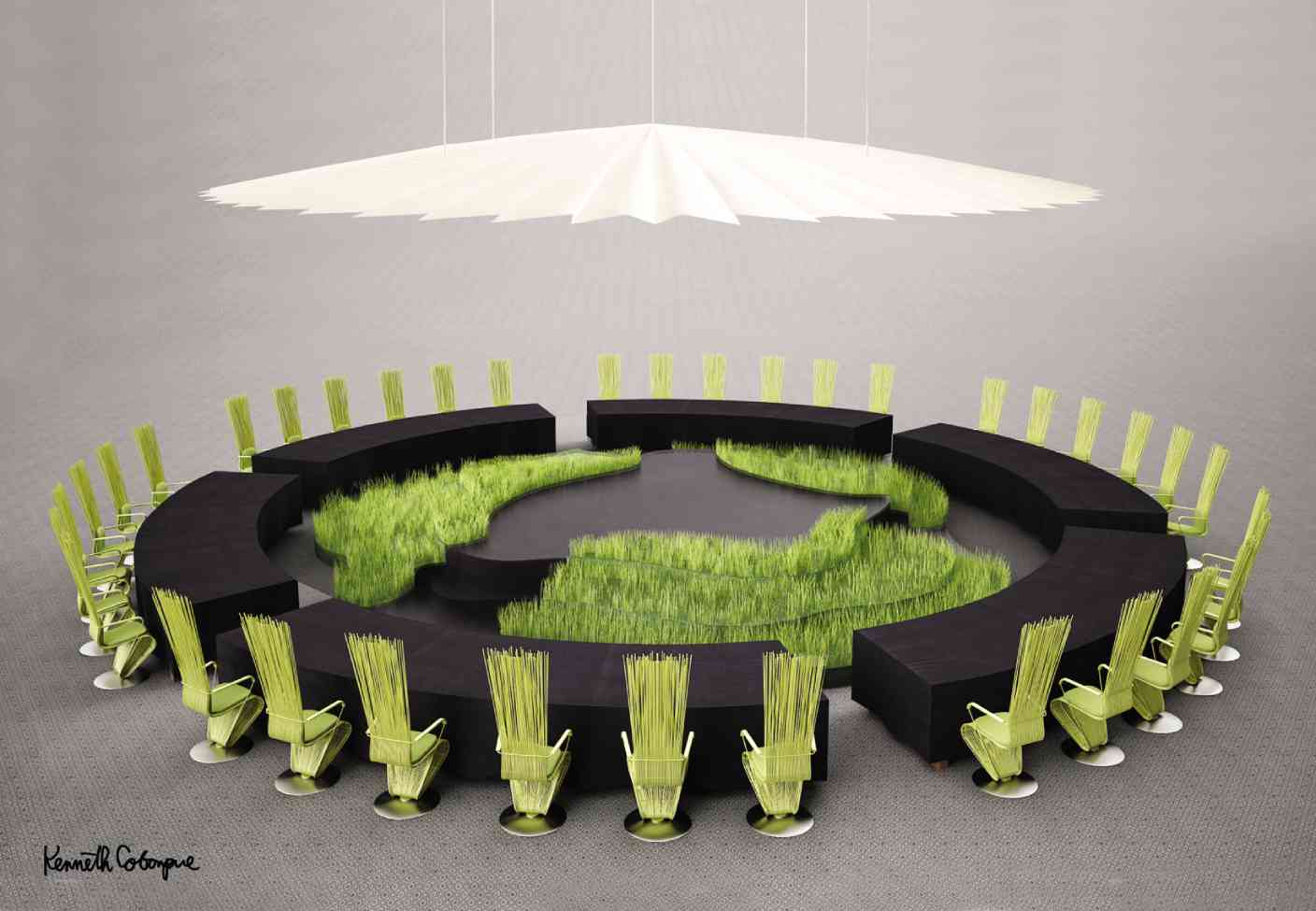 Creative professionals tasked to oversee the much-awaited dinner to be hosted by President Aquino for the 21 heads of state attending the Asia-Pacific Economic Cooperation (Apec) leaders’ summit will portray the tropical Philippines as an urban and modern venue through color, atmosphere, food and music.

It will be held at SM Mall of Asia Arena in Pasay City, a vast venue for concerts and sporting events.

World-renowned furniture designer Kenneth Cobonpue, creative director for the event, has come up with a design that evokes the Banawe Rice Terraces in Northern Philippines, considered one of the wonders of the world.

This concept departs from the sun-and-beach theme of the Apec meet earlier this year in Boracay, or from the fiesta theme of another Apec event.

The series of Apec events stretches this entire year, the first time since 1996 that the Philippines is hosting Apec.

“The colors in the venue are dark, but they will be offset by tones of gray accented by green. It would evoke a very natural feeling, but at the same time, gray and dark,” said Cobonpue in an exclusive interview with Lifestyle.

“I want the world leaders to see…that we are sophisticated and we mean business. I want them to see the Philippines not just through the bright and usual things identified with our country. This event would present an urban and modern Filipino,” he added.

Restaurateurs Glenda Barretto and Margarita Fores will collaborate on a special menu for the world leaders.

Noted Filipino composer Louie Ocampo is musical director, with Paolo Valenciano and Gina Tabuena in charge of the program and production.

Cobonpue said the SM Arena set-up would feature an elevated stage to allow all guests, including US President Barack Obama, Chinese President Xi Jinping and 18 other heads of state a 360-degree view of all performances.

“The arena would be cold and when the guests arrive, they would pass through a long tunnel and emerge in an oasis of greenery to transport them to another world,” he pointed out.

Much has already been said about Cobonpue’s much-copied trademark “Yoda” chair that would seat the VVIPs.

Cobonpue said the choice of this piece of furniture made of durable and indigenous rattan was deliberate.

“We picked a chair that is not typical or presidential. The event is going to be on television, so the chair has to be iconic and Filipino because it would be known around the world as a Philippine product,” the designer explained.

The Yoda chairs painted a light green, evocative of young rice stalks, would also tie in with the rice terraces theme.

Cobonpue’s furniture is in the collections of world celebrities, including Brad Pitt who has Cobonpue’s Voyage bed, among other designs.

Unlike the Yoda chairs available in Cobonpue’s shop, those to seat the various heads of state can swivel, thus allowing them to follow the action around the stage as they watch the performance.

“These Yoda chairs are special edition, wider and with armrests. Malacañang rented them. We’re going to sell only 40 pieces of these after Apec,” he said.

Cobonpue also related that when he took the job as creative director, he decided immediately to “tweak the look a bit to make the place warmer and more natural…It was really a challenge to transform the arena.”

To achieve this, he whipped up a “gigantic anahaw roof” that would hover over the guests inside the arena.

A white translucent fabric would hang above the delegates to provide a dreamlike atmosphere.

“All over the arena would be floating anahaw lamps. They will have LED lights that will change color,” Cobonpue added.

The designer made sure that world leaders who attend the Palace-hosted dinner would remember next week’s party.

He designed a souvenir or token titled “Sama-sama (United),” measuring 50 centimeters in height and 30 cm in diameter, that is “made of brass and is finished in yellow gold, pale silver and warm copper to symbolize the different races” attending the economic meeting.

Cobonpue said detailed human figures “are linked to each other as they ascend to the top. Each glass-covered token is housed in handwoven metal-and-buri (palm spine) carrying case with brass handles and clasp.”

Meanwhile, the island formations in the design of the tokens are made from laser-cut metal sheets and wood veneer.

“A sculptural narrative of Apec’s cultural, social and political diversity, the Sama-sama gifts represent unity, partnership and cooperation among the member states,” was how Cobonpue summed up the token’s message.