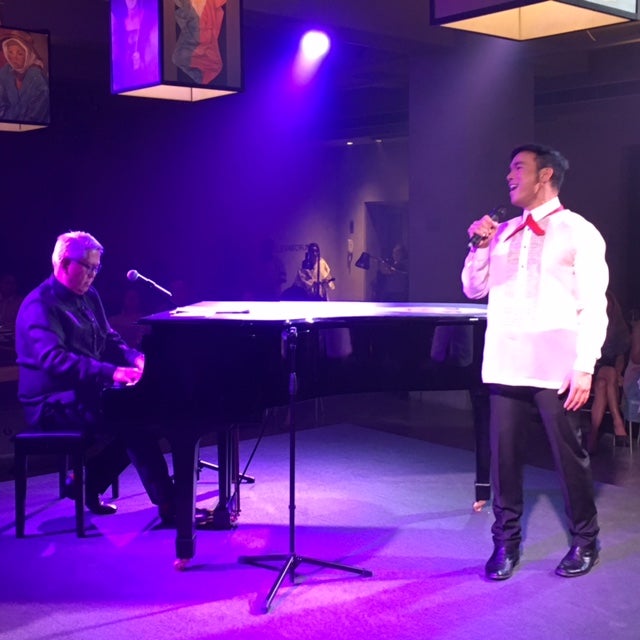 SOME of the country’s finest singers entertained guests during Saturday night’s launch of National Artist for Visual Arts Benedicto “BenCab” Cabrera’s flag-inspired watch for Swatch at the Swatch Center in Makati.

Dubbed as BenCab’s “ode to the Philippine flag,” Swatch’s latest collaboration, its third in 26 years, features part of the tri-colored flag on the right side of the watch’s strap and its golden sun on the white dial.

In keeping with the evening’s theme, singers Mark Bautista, Sheila Valderrama, Aicelle Santos and Jerald Napoles, accompanied on the piano by leading musician Ryan Cayabyab, sang a selection of Filipino standards, including “Ngayon at Kailanman,” “Ako’y Isang Pinoy,” and excerpts from such musicals as “Noli Me Tangere” and “Rak of Aegis.”

Written by Cayabyab, the musical version of “Noli Me Tangere” starred Bautista and Valderrama, while “Rak of Aegis,” which featured hit songs by the pop-rock group Aegis, starred Santos and Napoles.

The four singers sang “Ako’y Isang Pinoy,” a light patriotic ditty composed and popularized by Florante, before seguing to the National Anthem.

Cayabyab earlier went through a quick rundown of Philippine pop music history, including such landmark patriotic songs as “Bayan Ko,” which originated during American colonial times out of Filipinos’ desire for independence.

Members of the Philippine opposition later adopted it as a protest song soon after former Sen. Benigno Aquino Jr., President Aquino’s father, was assassinated during the latter part of the Marcos regime in 1983.

Cayabyab continued to play the piano even after the event had ended. Joining him were broadcaster Rico Hizon and singer Cris Villonco, who sang Cayabyab’s “Limang Dipang Tao.”

With leaders from 21 countries that make up the Asia-Pacific Economic Cooperation holding talks in Manila next week, Filipinos are once more caught in a flag-waving fever. If you can wear your patriotism on your sleeve, then why not also wear it on your wrist?