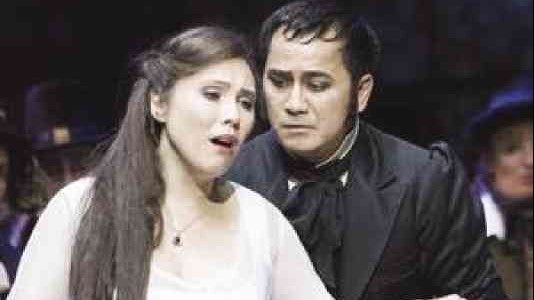 LEADING Filipino tenor Arthur Espiritu made his auspicious debut at Munich’s Gärtnerplatztheater, Oct. 8, as Elvino in the Bellini opera “La Sonnambula” with soprano Jennifer O‘Loughlin as the well-received Amina.

German music critic Robert Braunmüller of the Abendzeitung said Espiritu “doesn’t fall behind the soprano O’Loughlin who makes an astonishingly perfect Amina. The tenor is a real discovery and one should look forward to his Don Ramiro in ‘La Cenerentola.’ His tenor voice has a light metallic blend. His high notes are sure, his technique elegant and controlled. When the two sing the seemingly endless ‘Addio’ at the end of the first act, one wished it would never end.”

Under conductor Marco Comin, the Bellini opera was staged at Prinzregententheater with Michael Sturminger making his Munich directorial debut after his stage productions at Opernhaus Zurich, St. Petersburg’s Mariinsky Theatre and the Bregenz Festival.

Espiritu said the opening night was so much fun: “The audience was very appreciative of us, and it was great to be able to take them in our story. They were right with us all night. I was very happy with their warm reception of me.”

The lead tenor role in “La Sonnambula” was the second for Espiritu, who has a five-night engagement including the opening night.

He has good words for his Amina. “Jennifer O’Loughlin was wonderful. She was more than capable of singing Amina. I must say it is a very challenging role for any soprano.”

“La Sonnambula” was last heard in Manila at the Manila Grand Opera House in the late 1940s with Mercedes Matias Santiago as Amina. Its opening night with President Quezon in the audience was marred by a power outage; the performance resumed after midnight.

Espiritu has kept a hectic schedule in the European opera circuit singing the Duke in “Rigoletto” with Oper Klosterneuburg; Ferrando in Theater Basel’s “Così Fan Tutte”; with debut appearance in Staatstheater am Gärtnerplatz’s Brigitte Fassbaender production of “La Cenerentola,” which opens Nov. 5.

“It is so wonderful to sing in places that still has so much culture. To Europeans, opera is so much a part of their culture that people go and buy opera tickets to support the arts. I feel very lucky to be able to be in a society that still embraces this art form,” he said.

Asked what he tried to achieve in every performance, Espiritu said: “I am very hard on myself most of the time that when people try to compliment me, deep down inside me, I’m thinking of the details of my performance. One by one, I analyze what I have just done, and, of course, I will realize some parts that did not exactly go where I wanted it to go. But, to answer the question, I try to be in the moment, and I try my best to tell the story as organically as I can. I try to plan ahead in my head and visualize what I wanted to do, and when it’s time to go on stage, I try to immerse myself in the character. Also, thinking about the notes I got from the director and the conductor, and implant them in before I go on stage. So it would come out as one whole picture. If something does not go according to plan in the music, or the other character decides to go outside the box, I just react to it and stay in that moment in time. As if it’s real life. So, in short, I don’t try too hard to put too many layers in my thoughts. I just focus on the task at hand and hope to God that it would be good. It has to be as organic as much as possible. People in the audience can see through you. They can also feel if you are nervous or inhibited, so you must communicate to them as honestly as you can.”

He is all set for his debut with Frankfurt Opera next year in Puccini’s “Gianni Schicci.”