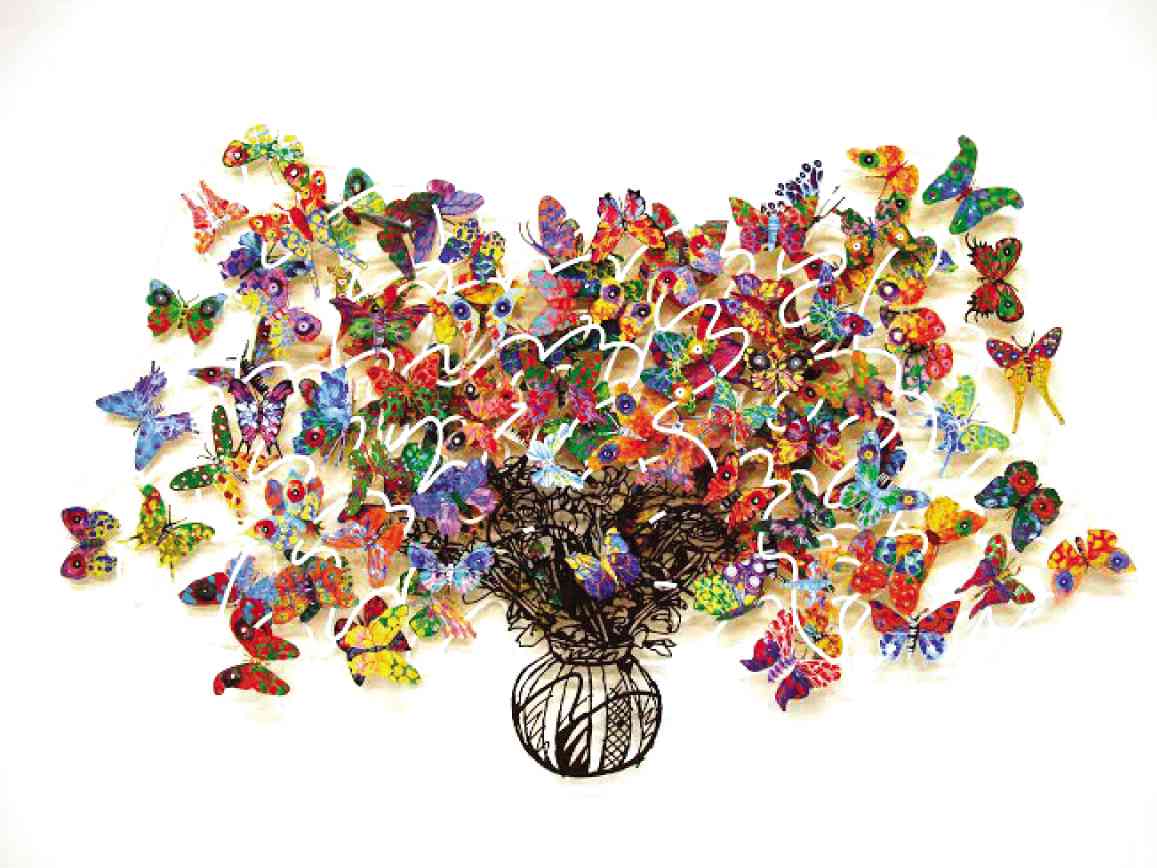 ORIGINALLY from Israel and now with branches in Singapore, Manhattan, and Turks and Caicos Islands, Bruno Gallery has now included the Philippines in its roster of venues even just for a few days.

This was through the recent ManilArt 2015 in which the works of Pop Art heavyweight Charles Fazzino, Israeli artists David Gerstein and Uri Dushy, and Azerbaijan-born Slava Ilyayev were shown.

Layers in bright, effusive colors appeared to be the thread that held the varied styles together, whether thick daubs of paint, curving steel strips, or cut and embellished acrylic prints.

Ilyayev’s impasto strokes in the lone painting that was on exhibit were a staple of his style, as were the foliage in a fiery gradient of reds, oranges to yellows.

The thick pallet knife applications were apt to show the loosely full treetops piled along a park lane’s narrowing corridor of perspective prior to the actual falling of leaves in autumn, a signature subject of the artist.

Gerstein and Dushy are known for large-scale sculptures in public spaces not only in Israel but also around the world. Their relief pieces in ManilArt consisting of layers of cut steel seemed to be mini versions.

Here, however, despite both having a penchant for vibrant hues, it is Gerstein’s hand-painting of laser-cut steel that heightens the frenetic pedaling of cyclists or the busy fluttering of a myriad butterfly wings.

In his newest outing, Gerstein introduces the use of black paint on his back-most layer, as on the bicycle-riding lady in “A Lovely Day,” and a vase of flowers in “Symbiosis.”

Such figures are a contrast to the forward alternating layers of multicolored butterflies interspersed with white squiggling lines that perfectly depict delightful frenzy.

One such is “Empty Chair,” on which a yellow bird perches. When turned around, the seat is reversed and the bird becomes blue. Best of all, it is the embodiment of affordable art.

Dushy’s “Sunday in the Park” is devoid of flying creatures that are often in his creations although its subjects are also people on bikes. That is in just one tone of red implies no less movement. It is typical of his wall sculptures that feature two-dimensional groupings that effect animation.

Certainly lively are Fazzino’s limited-edition decoupage of renditions that spill over at the edges. Touted as the Master of 3-D Pop Art, his works have caught the fancy of Sir Paul McCartney, Michael Jackson, Hillary Clinton and Ellen DeGeneres.

“It’s a Small World” has him rendering a stylized world map, highlighting iconic attractions with carnivalesque verve and sealing the pop kitsch with multiple winks are sparkling crystals that dot each work.

Gallery representative Dave Rayos says that, based on his survey of ManilArt 2015, Filipino artists favor “dreary” subjects. He says Bruno Gallery artists’ “bright and cheerful” oeuvre should provide some contrast.