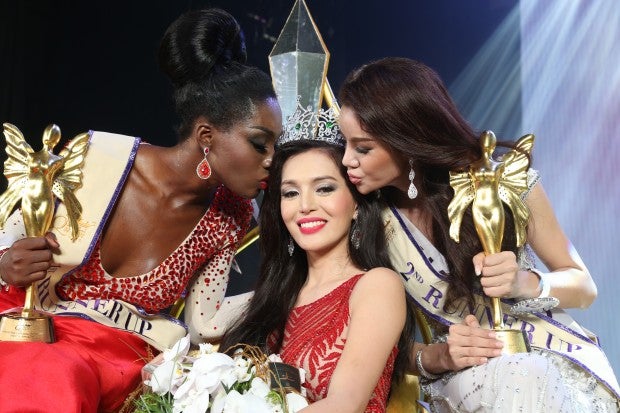 There is a little bit of Caitlyn Jenner is this year’s Miss International Queen winner Trixie Maristela. Not unlike the former Bruce Jenner who has become a high-profile transgender advocate after her breakout Vanity Fair cover, the Filipina was put on the pedestal as a rising LGBT advocate after winning a series of beauty pageants.

Shortly after winning the inaugural Miss Gay Manila 2015 title, Maristela caused a buzz in the social media when she and transgender fashion designer Veejay Floresca were denied entry to a high-end night club in Metro Manila earlier in June this year.

At the ID check prior to entering the club, Maristela who was wearing a short yellow dress that night was told that she was not dressed appropriately as the club did not allow cross-dressers.

“I was humiliated in front of my clients,” Maristela related the incident to Asia News Network in an interview.

Her Instagram and Facebook posts on the episode then went viral forcing the club to subsequently issue an apology. The unfortunate incident in turn had sparked a healthy debate on the rights of transgender people in the Philippines; other clubs were compelled to reassess their entrance policies.

“It was a good thing that it happened and I had a chance to share it on social media to make people talk about it,” said Maristela, 29.

Although a largely Roman Catholic country, the Filipino society has largely tolerated the LGBT community.

Nevertheless, Maristela and her companion’s slight brush with the night club bouncer highlights the fact that even fame and status did not translate to liberation and respect for the both of them. The crux of the problem, she said, lies in the ambiguous legal status of transgender people.

“We still can’t change our gender markers and don’t have a legal status,” said Maristela. All is not lost yet for Maristela and her comrades—LGBT rights have lately become hot button issue for politicians with the large and vibrant LGBT community in Manila.

Maristela herself was tapped by the campaign machinery of Manila mayor and former Philippine President Joseph Estrada to engage the LGBT community.

“I wish to conduct more seminars on LGBT and talk about issues like sexual harassment and sexual orientation.

“It is important for people to understand the basics and learn the difference between being gay and transgender, for instance. In the Philippines, transgender women are often called ‘bakla’ although the term actually refers to homosexual men,” said Maristela.

With her recent triumph at the Miss International Queen’s finale on November 6, Maristela who was earlier signed on by Philippines’ Viva Entertainment was set to be propelled to further stardom.

That would prove to be a huge leap from her former job as a multilingual business analyst but true to her advocacy streak, Maristela hoped be more than just a pretty face.

“It is important for a transwoman like me in be visible in the media but I don’t just want to appear glamorous.

“I want to send out the message that transgender people are just like everyone else…we have rights, we can be talented and beautiful. There’s really no reason to look down on us, we can be the best version of ourselves if you just let us do what we want,” said Maristela.

While Maristela is adjusting to life as a public figure, her romance with her beau Art Sta. Ana is already out in the open with the release of the book “He’s dating the transgender” lovingly written by Sta. Ana.

The lovebirds started in a typical boy-meets-girl fashion and their relationship has been going strong for six years.Their love story became the talk of the town in the Philippines when a column titled “‘I’m dating a transgender” that Sta. Ana wrote in a Manila-based national newspaper had 80,000 shares on

social media within hours of publication.

In a honest recount of their relationship, Sta. Ana who identifies himself as a straight man wrote that many of his family and friends were not aware that Maristela was a transwoman until she came out on the popular television show, Eat Bulaga’s gay beauty pageant titled “SuperSireyna”.

He admitted that it was not easy for them to ignore what others think. He said, “Being with Trixie exposed me to the plight not just of transwomen but of LGBT people in general. Being gender deviant doesn’t make you any less capable of contributing to the society, taking care of family and living a normal life”.

It looks like Maristela has found her soulmate in her crusade.

The love story of Art and Trixie