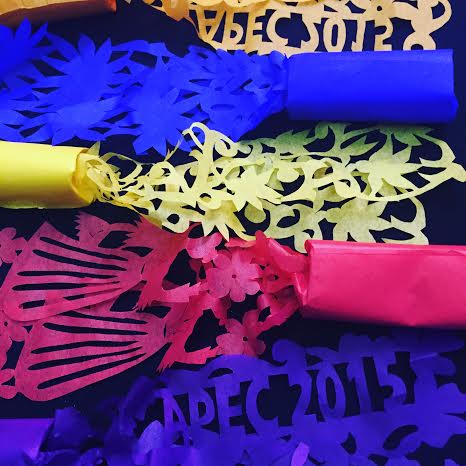 "PATILLAS' wrappers etched with the phrase "APEC 2015" provide a visual treat to guests attending the Apec 2015 CEO Summit Dinner at Tower One in Makati City.

Aptly titled “Fiesta! A Festival of Food, Fashion and Entertainment,” the dinner party at the outdoor lobby of Tower One and Exchange Plaza along Ayala Avenue left foreign guests impressed by the lowly local pastry and craving for more local pastries and delights.

The event was also the entertainment finale to the Asia-Pacific Economic Cooperation (Apec) 2015 CEO Summit Philippines.

The venue was spruced up to look like a quiet town from the Spanish period, during which most of the country’s pervasive cultural practices originated.

And pastillas images were everywhere— from the Christmas tree with pastillas wrapper trimmings made of laser-cut felt at the Tower One lobby and the neckties worn by food servers to the tables groaning with the rainbow-colored pastries that guests enjoyed.

Gino Gonzales, TV, movie and stage designer who was drafted to design the complex, said organizers specifically asked that the milk-based soft candy be the peg for the event.

“They wanted something that harks back to the Spanish era—the churches, the pastillas—I picked it from there,” Gonzales told Inquirer Lifestyle.

He said he was even shown photographs of pastillas wrappers taken by Jaime Zobel de Ayala to jump-start his creative juices.

The Hispanic colonial theme was also evident in the stage design that featured a series of white bahay-na-bato with architecture reminiscent of—what else but pastillas?

Zobel de Ayala, chair and CEO of Ayala Corp. and one of the three Philippine representatives to the Apec Business Advisory Council (Abac), and Tony Tan Caktiong, founder and chair of Jollibee Foods Corp. and also an Abac member and chair of the Apec 2015 CEO Summit Philippines, welcomed the guests.

Zobel de Ayala told guests the event was an “opportunity to share with you some of the best of Philippine culture. More than anything, tonight is a unique chance for fellowship and unity.”

He also noted that the country has achieved increasing interconnection which is “part and parcel of a maturing and growing economy.”

Zobel de Ayala also took the opportunity to ask guests to offer a moment of silence “in solidarity with the French people in this time of tragedy,” referring to the recent mass murders in Paris that the terrorist Islamic State claimed responsibility for.

“It’s an absolutely wonderful expression of culture and hospitality,” said Ron Hoffman, senior representative for the Asia-Pacific Region of the Government of Alberta in Canada.

“It’s my first time (in Manila) and I just told my wife we’ll come here. I have visited a lot of Asian countries and I am very pleased to have seen the Philippines as an Apec host.”

Hoffman and other foreign guests were treated to an almost hour-long program that featured some of the best cultural and entertainment artists in the Philippines.

The Sta. Cecilia Marching Band composed mostly of young musicians and retired members of the Philippine Army set the tone as guests arrived in the early evening by playing songs by the Boyfriends and VST & Company.

At the show proper, the Ramon Obusan Folkloric Group performed a medley of folk dances from the most colorful rural festivals in the country including the Pastores, Pahiyas and Karatong and ended with a heart-stopping “Sayaw sa Bangko” that dancers performed on narrow benches leaving many in the audience with their mouths agape.

Singer Bituin Escalante later stepped in with her posse—musicians Diwa de Leon on “kudyapi” and Kakoy Legaspi on rock guitar with the AMP Big Band to sing a soulful rendition of the Beatles’ “While My Guitar Gently Weeps” arranged by Mel Villena.

Models wearing the designs of Philip Rodriguez, Cary Santiago and Albert Andrada then took over the stage and strutted to tunes arranged and performed by Louie Ocampo. Jackie Aquino directed this suite.

Rodriguez’s collection was inspired by the Manton de Manila; Santiago’s gowns talked of the art and culture of the Srivijaya from pre-Islamic and pre-Spanish Southern Philippines; and Andrada’s creations displayed impeccable needlework and embellishment using Capiz shells, crystals and Swarovski crystals.

Escalante then returned onstage with The Company, Thor and AMP Big Band to sing a selection of playful Filipino songs sung in exemplary vocal style and the night ended with after-party music featuring Mel Villena, Gail Blanco and the AMP Big Band.

The menu, as expected, was Pinoy fiesta. Top hits in the culinary lineup were the roast beef, fiesta salmon (that needed to be replenished several times), and bibingka from the kitchen of chef Gilbert Pangilinan of such restaurants as Kai (modern Japanese), Cerveseria (Spanish) and Isogi (Japanese comfort food).

And just to make sure that no one forgot the theme, exquisitely wrapped pastilles were placed in strategic areas all around the venue.